A high school in Washington state is reportedly forcing student athletes to don ankle-worn tracking devices during games and practice, as part of what administrators say is an effort to “contact trace” Covid-19 cases. 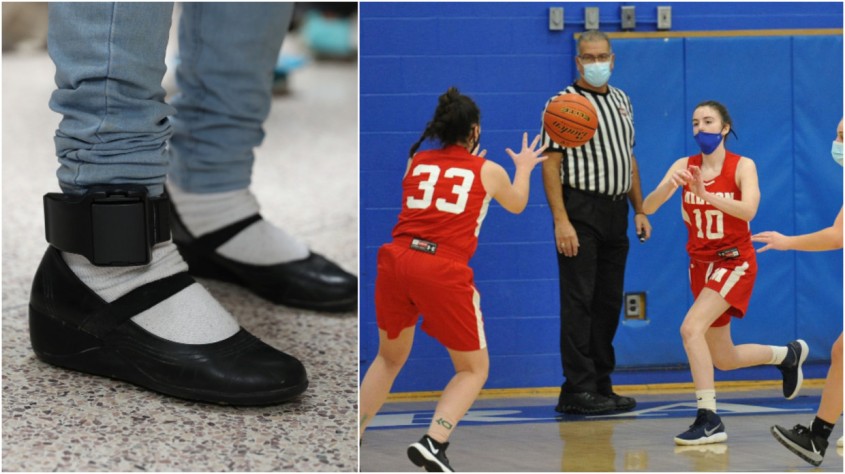 Eatonville High School will require both student athletes and staff to wear the monitors during the upcoming school year, according to local media reports.

The school argues the devices are needed to track potential coronavirus outbreaks on campus, insisting they do not actually transmit wearers’ locations, instead only tracking players’ proximity to one another and how long they remain nearby.

“We are using these monitors for high contact and moderate indoor contact sports. The monitors are for both staff (coaches) and students on the field, regardless if they are vaccinated or unvaccinated,” the school said in a statement to local outlets, dispelling rumors that the tracking devices would be required for the unvaccinated only.

If a student or coach tests positive, we will have immediate information regarding athletes’ and coaches’ contacts, so we can more tightly determine who might need to quarantine.

While the tracking devices will only be worn during games and practice for certain indoor sports, and left on campus in the meantime, the monitors have proven controversial for some parents.

One mother who spoke with the conservative-leaning outlet the Post Millennial said her 15-year-old daughter was asked to wear a tracker before attending volleyball practice at Eatonville High, prior to obtaining parental consent.

The mom, who declined to be named, said she learned of the requirement from her daughter in a text message, but went to speak with school officials in person after she was unable to get answers by phone.

“The mother spoke to an employee in the school office, as well as a coach and was informed there was a meeting last week discussing the ankle monitoring program,” the outlet reported, adding that a school athletic director later “acknowledged the error and apologized for the ‘slip up’ of not getting her consent.”

Though the mother was able to take a photo of the monitor, she claims she was barred from photographing the gadget while her daughter was actually wearing it.

The devices, which were not mentioned in the school’s Covid-19 guidelines for the upcoming fall semester, are reportedly produced by Triax Technologies, a Connecticut-based tech firm.

They are designed to be worn on a hardhat – the company specializes in products for the construction industry – but can also be attached elsewhere on the body. Similar technology has been used for contact tracing among professional and college-level athletes, though remains almost unheard of for underage high school sports teams.

And I mean…Governments around the world are clearly trying to get us all profitably and proactively involved in this process.
To do this, they have signed a lot of valuable contracts with Pharma.

As a result, all the governments of the world are forced to act … and they have really acted tough on pharmaceuticals.
The times when each of us held fundamental rights are over

In order to acquire them again, I mean the basic rights, it is enough for the little man to free his upper arm and hold it out to receive the redemption along with the remaining basic rights.

There were some very accurate comments …

1. Gulags coming next? They are just training people to accept these restrictions and quarantines. It is all psychological training. #News Unplugged#

2. For how long are people prepared to put up with this circus, this humiliation, this degradation ! #ebbi581#

3. “the East German Stasi could only have dreamed of having a police state like USA’ -Thomas Drake =(an American former employee of the National Security Agency)  #yuri4799#