According to media reports, at the University of Maryland in the USA, a pig heart was transplanted for the first time in a patient with severe heart disease.
That sounds like a medical miracle.
But only if you don’t look at the medical facts, as the nationwide association Doctors Against Animal Experiments points out.

In xenotransplantation, an organ from an animal is transplanted into another species. Even a transplantation within a species leads to massive acute and chronic rejection reactions of the body, which can only be kept in check by lifelong administration of drugs that suppress the immune system.

In the case of transmission from one animal species to another, this defensive reaction is far more severe.
One tries to control this rejection by “humanizing” the donor animal.
Human genetic material is introduced into pigs and genes responsible for rejection reactions are switched off. This is what happened in the current case, in which the heart of a genetically modified pig was implanted in a man in the USA.

The organs of these genetically modified animals should not be recognized by the recipient’s immune system.
“A feared hyperacute reaction has apparently been prevented in the current case,” says Dr. Gaby Neumann, research associate at Doctors Against Animal Experimentation.

“But one has to assume that there will also be delayed rejection reactions.

Therefore, the organ recipient will definitely have to take immuno-lowering drugs that go far beyond the levels known from human heart transplantation.”
This human experiment has been preceded by animal experiments for years, in which pig hearts are planted in monkeys – mostly baboons.

The primates are exposed to a veritable cocktail of drugs that would hardly be feasible for use in humans.

Among other things, the animals receive painkillers, cortisone and a variety of other drugs and antibodies to lower blood pressure or support the circulatory system, to suppress a rejection reaction, to prevent thrombosis, to suppress inflammation, bacterial and viral infections and to form red blood cells.
All drugs have a wide range of serious side effects. 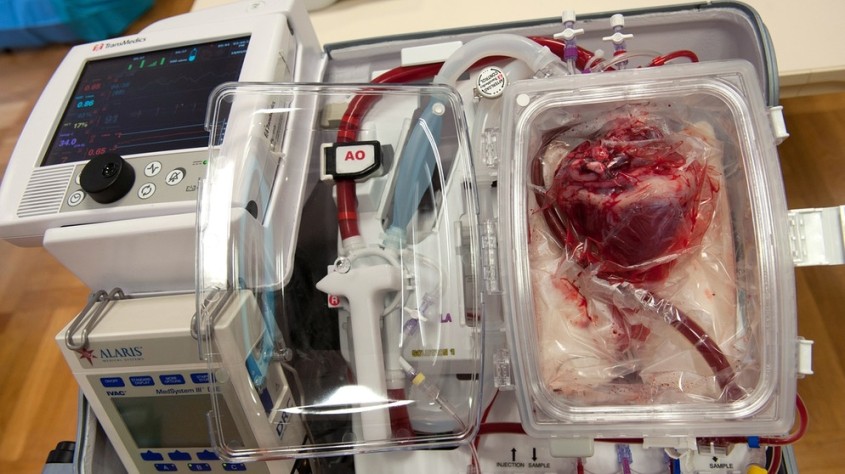 Nevertheless, most monkeys die from organ failure within hours or a few days.
In Germany, too, such xenotransplantation experiments have been carried out for decades at the Ludwig-Maximilians-Universität in Munich.

Another problem is the potential risk of uncontrolled spread of previously unknown diseases.
Viruses that are harmless to pigs but potentially dangerous to the human recipient of the organ can hide in the pig’s genome.
And not only for him.
Because at the latest through Corona, we know that animal pathogens can change and spread to humans.
In the late 1990s, foreign organ research almost came to a standstill when it was discovered that porcine retroviruses (PERV) can infect human cells in the test tube.

Even if the enormous hurdles in rejection are to be overcome, it remains unknown how a pig organ reacts to human lifestyle.
The much higher cholesterol levels in humans than in pigs can lead to blood vessel blockage.
To date, nobody knows whether animal organs can be regulated by human hormones at all.

It is also unknown to what extent the much shorter life span of the pig affects the transplanted organ.

“Especially for the benefit of patients, the solution to the acute shortage of organs cannot lie in completely incalculable xenotransplantation,” says Neumann.

“Much more important is the increased focus on improving preventive measures and the development of new therapy options with the help of sensible, human-relevant high-tech methods that do not use animals.”

And I mean…“There are simply not enough donor human hearts available to meet the long list of potential recipients,” explained Bartley P. Griffith, who transplanted the pig heart, adding that though the scientists were “proceeding cautiously” with their research, they are “optimistic that this first-in-the-world surgery will provide an important new option for patients in the future”

Of course! Donating human organs requires the donor’s consent.
Animals are bred at will, genetically manipulated, and in the end they are slaughtered and what is needed is taken from them.
They don’t have to be asked, they are “only” animals and those without rights are not respected

I’m still waiting for the FIRST PIG that gets a human heart.