..protect
..respect
Care for the weaker
Help them live

Imagine that you want to go shopping and are referred to the store entrance because you may be infected with the corona virus. The reason for the assumption: A thermal imaging camera that measures the body temperature of all entering customers wants to have determined that you are feverish and therefore pose a danger.

This is exactly how a branch from the supermarket chain EDEKA in Saarbrücken, Germany, is said to have operated until yesterday – before the Saarland State Commissioner for Data Protection, Monika Grethel, has initiated an administrative procedure. The Luxembourg online portal “L’Essentiel” first reported about it.

“Lonsdorfer” has therefore installed a thermal imager at the entrance to the branch  which scans the body temperatures of customers in real time. If it is too high, an employee speaks to the passers-by. If there is no explanation for the increased temperature, the customer must leave the shop.

The right to informational self-determination of the customers is violated. You could complain because the camera is against personal rights, Schömer continues.

According to the media report, “Lonsdorfer” has not yet commented on the allegation. The Saarbrücken company that installed the security system defends it. Customers and employees would feel more secure. On the other hand, the procedure had been agreed with a lawyer: the thermal imager complies with the GDPR because it does not store the data, according to the managing director of  Company “MATEC Sicherheitssysteme”.

Schömer replies in “L’essentiel”: “When someone – sick or in good health – is questioned by the eyes of other customers, there is clearly a risk of stigmatization.”

According to information … the supermarket suspended the camera again until further notice on Wednesday afternoon. However, it should not have been the only one who uses or plans to use such a camera from the Saarbrücken company ” Matec Sicherheitssysteme “– the company is even said to be on 100 other orders from Saarland are working.

And I mean…One wonders whether the government has the new version of the Covid-20 ready. The old version will soon no longer work and the carefully prepared surveillance system is on the ass!

My best  regards to all, Venus

Today is a great day.
We broke the 100,000 visitor mark in our blog World Animals Voice!
Yes! we are grateful for your support.
It is the recognition of our work.

We try to report on the suffering of our mandates every day, we want to raise awareness and mobilize as many as possible. We know that we are not alone there!

Our message is simple: we are loyal to animals, we stay and fight on the side of the victims of this system, on the side of animals and loathe every form of betrayal of our fellow creatures.

We will continue to work to the best of our ability for a just animal world with the aim of abolishing these destruction machines – constructed by system and society.
Together we can do it, together we are strong and effective.

Thanks to you all,

When a pathogen challenges a healthy immune system, the body responds with inflammation to fight it. But when an animal is stressed, the hormone cortisol is released.

This causes the normal inflammatory response to change into a more limited activation of white blood cells. And this allows new pathogens to survive and multiply.

In a controversial move, China recently reopened its wet markets, which sell fresh meat, produce and live animals. A wet market in Wuhan may have been the source of the COVID-19 outbreak.

Prime Minister Scott Morrison has condemned the move, and the World Health Organization reportedly stated while wet markets don’t need to close down, they should be prohibited from selling illegal wildlife, such as pangolins and civet cats, for food, and food safety and hygiene regulations should be enforced.

The demand for meat and milk in China is growing rapidly. Nearly 1.5 billion people live in China, and each person eats, on average, about 2.5 times more meat than in the early 1990s.

Poorly treated animals are stressed, and stressed animals are more likely to harbour new diseases because their immune systems are compromised.

This means these wet markets, where there are stressed animals in close contact with humans, are the perfect breeding ground for new diseases.

China urgently needs to restructure its animal industries for global food safety. “Clean” meat” (meat grown from cells in a laboratory) offers hope – but more on that later.

The consumption of wildlife per se does not increase the risk of disease transmission. Freshly killed deer in the Scottish highlands can provide venison that’s less risky than intensively farmed chickens, which are routinely infected with human pathogens.

When wildlife are stressed, farmed in small cages and kept in close contact with humans during the entire rearing and slaughtering process, including in wet markets, the risk of disease transmission rises.

Read more: How do viruses mutate and jump species? And why are ‘spillovers’ becoming more common?

When a pathogen challenges a healthy immune system, the body responds with inflammation to fight it. But when an animal is stressed, the hormone cortisol is released.

This causes the normal inflammatory response to change into a more limited activation of white blood cells. And this allows new pathogens to survive and multiply.

Some weeks ago I visited a new dairy farm in China with more than 30,000 cows. I passed through a destroyed village where small farms kept just a few cows each. Cows in the new megafarms are permanently housed and produce twice as much milk as the cows on small farms, being fed a richer diet.

But they typically last only two or three lactations because of the stress, whereas small farmers’ cows might be kept for a decade.

Read more: Coronavirus is a wake-up call: our war with the environment is leading to pandemics

Domesticated animals have been bred to tolerate traditional farming systems without getting unduly stressed. Wildlife have not.

The response to wildlife farming

In 2017, the Chinese government issued a law tightening up trade in wildlife, but still allowed wildlife not under state protection and obtained by a person with a hunting license to be sold. Fines for vendors and purchasers were as little as twice the value of the wildlife.

With limited “wild life” available for consumption, entrepreneurial Chinese have turned to farming them in an industry reportedly worth billions and employing 6 million people.

Keeping wildlife in small cages – as is practised on wildlife farms – causes them immense stress, traditionally recognised as “capture myopathy”, which can be so severe that it kills them.

But in February this year the law tightened to include a ban on all consumption of terrestrial wildlife, but only if they lived naturally, rather than on farms.

However, nearly 20,000 of the wildlife farms have reportedly been closed down since the COVID-19 outbreak began.

There are signs of growing awareness in China towards stress in their animals.

My colleagues and I at the University of Queensland recently established a Sino-Australian Animal Welfare Centre, and our latest research has found a growing number of scientists studying animal welfare issues in China.

What’s more, there’s a big opportunity to bring “clean meat” into the Chinese diet. Clean meat is grown synthetically from muscle cells, without the massive land and water resources required of traditional meat production in China, without the emissions of pollutants and, most importantly, without the risk of transmission of novel diseases.

Read more: Coronavirus has finally made us recognise the illegal wildlife trade is a public health issue

And Chinese people are more likely to purchase clean meat and vegetarian-based alternatives than people in the United States.

Cultural studies suggest that in general, Chinese people have many of the right qualities for widescale adoption. They act in the collective interest, not for themselves, they are adaptable and entrepreneurial, and their society is driven by competition and success in the face of adversity.

Read more: Calling COVID-19 a ‘Chinese virus’ is wrong and dangerous – the pandemic is global

Chinese scientists are already working on clean meat. In fact, the first cultured meat there, from pig muscle stem cells, was produced last year by scientists at Nanjing Agricultural University.

Clean meat is expected to comprise 35% of the global meat market in 2040. Perhaps it will be even faster in China to avoid more animal-borne diseases emerging. 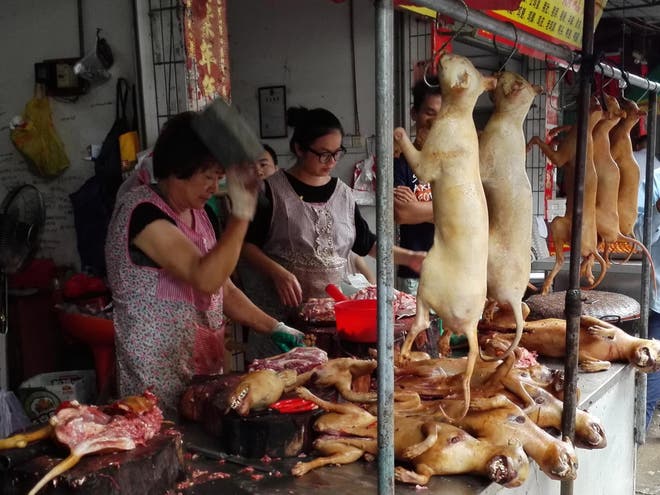 A second city in China has banned the consumption of dogs, cats and some wild animals – a move campaigners hope could signal an end to the trade of all wildlife at “wet markets” across the country.

The ban in Zhuhai follows a decision made by authorities in Shenzhen earlier this month to prohibit dog and cat meat. The new rules come into force in Zhuhai on 1 May, according to state-run China News.

A spokesperson for the animal charity Humane Society International described it as “thrilling news”, and said it could be the start of a domino effect of animal protection legislation across China.

It comes as The Independent’s Stop the Wildlife Trade campaign calls for an international effort to tighten restrictions on wet markets to reduce the risk of future pandemics.

The coronavirus outbreak is believed to have originated at a wet market in Wuhan where exotic animals were sold – making the jump to humans from animals kept in close proximity.

Last week China’s ministry of agriculture and rural affairs stated for the first time that dogs should be treated as pets rather than livestock.

Yet in the absence of a national ban, other cities in mainland China are believed to be considering their own legislation to stop the consumption of dogs and cats.

“Zhuhai’s ban on dog and cat meat eating is thrilling news for all those in China and around the world who have campaigned for so long to end this brutal trade,” said Wendy Higgins, Humane Society International’s director of international media.

“Coming so soon after Shenzhen’s ban and the government’s historic statement classifying dogs as pets, we hope this is the start of a domino effect of progressive legislation across China, with other cities following suit.”

The Zhuhai authorities said the consumption of some wild animals will also be banned, based on the guidance given by the ministry of agriculture and rural affairs. However, animals such as alpaca, ostrich, silver fox, blue fox and raccoon dog – considered “special livestock” – will still be allowed to be traded as meat.

“Rebranding wildlife as livestock doesn’t alter the fact that there are insurmountable challenges to keeping these species in commercial captive breeding environments, and that their welfare needs simply can’t be met.”

Dr Jane Goodall DBE has backed The Independent’s campaign calling on governments to work together to impose stricter controls on the trade, sale and consumption of wild animals.

The renowned conservationist said: “If we go on treating animals the way we are that is going to hit back on us, as it has.”

An estimated 10 million dogs a year are killed for China’s dog meat trade, which is thought to be consumed infrequently by less than 20 per cent of the population, according to Humane Society International.

A nationwide survey in 2016 suggested a majority of Chinese citizens think the dog meat trade should be completely banned.

Ms Higgins said: “It would seem that in the absence of a national ban, cities are taking matters into their own hands and reflecting the mood of the people.”