Street traders in India — as well as southeast Asia — are risking starting dangerous diseases like coronavirus by keeping animals for consumption in squalid conditions, an investigation has found.

Goats, lambs and chickens are sold from cramped cages in scenes mirroring those in live animal markets in Wuhan, China, where Covid-19 originated, according to witnesses.

In exclusive footage captured in China, Vietnam and India, animals such as deer, crocodiles, raccoons, cats and dogs can be seen living in filthy conditions, where the investigators said dehydration, starvation and disease were rife.

The videos were taken at “wet” markets — where animals from cats to crocodiles are slaughtered on demand for customers, and people are in constant close contact with animal body parts and bodily fluids, including blood.

Scientists strongly believe it was at such a market where Sars started in 2003-4, and also in Wuhan where Covid-19 virus, which has killed more than 45,000 people worldwide, began.

In February, after the outbreak of coronavirus, the Chinese government temporarily banned the sale of wild animals for consumption, but street traders said they planned to resume as soon as the ban was lifted.

On Wednesday, the city of Shenzhen became the first in the country to permanently to ban the consumption and production of dog, cat and wildlife meat in stores, markets and restaurants.

Killing chickens on demand at the roadside is common in the country, and animal-welfare campaigners say all types of open-air slaughter pose health risks to humans.

Abigail Penny, executive director of Animal Equality UK, said: “Wet markets are filthy, nightmarish places. The overwhelming fear that these poor animals suffer is unimaginable. But also, time and again wet markets have been the source of dangerous viruses — they are a major threat to human health, there’s no doubt about it.

“It’s not enough to close them temporarily, wet markets need to go once and for all.”

Amruta Ubale, of Animal Equality India, said: “There are some wet markets that are still open in India, while the rest are closed. Many individual meat shops (not situated in markets) are still open and are slaughtering animals like chickens in the shops as they usually do.”

Previous research has found pangolins butchered for their scales, which are then sold on the black market for traditional Asian medicine in India. Pangolins are believed to have been a key carrier of the coronavirus before it passed to humans.

And similar work also uncovered an international trade in monitor lizards for their body parts after the animals are poached in India.

Professor Andrew Cunningham, of the Zoological Society of London, said: “The animals have been transported over large distances and are crammed together into cages. They are stressed and immunosuppressed and excreting whatever pathogens they have in them.

“With people in large numbers in the market and in intimate contact with the body fluids of these animals, you have an ideal mixing bowl for [disease] emergence.”

Dr Ian Lipkin, an infectious disease expert at Columbia University’s Mailman School of Public Health, said: “If you take wild animals and you put them into a market with domestic animals or other animals, where there’s an opportunity for a virus to jump species, you are creating … a superhighway for viruses to go from the wild into people. We can’t tolerate this any more. I want the wild animal markets closed.” 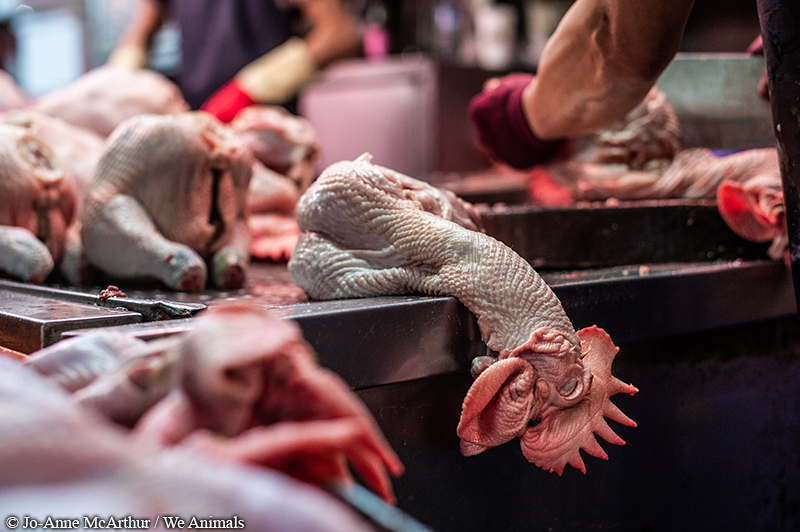 Many other disease outbreaks, such as bird flu, swine flu, and SARS, have sprung up from raising and killing animals for food. Help local activists cut off what could become the next disease outbreak at the source.

Live-animal markets are blood-soaked slaughterhouses where members of the public can choose live animals, such as chickens and rabbits, who are then slaughtered while the customer waits. Thousands of terrified animals are trucked from factory farms in other states into New York City each day in cramped, filthy crates. They’re often denied food and water, and their throats will be slit.

There are over 80 live-animal markets and slaughterhouses operating in New York City, many of them near schools, parks, and residences. Stressed, injured, and sickly animals are often caged in areas with public access, sometimes even on public sidewalks, where faeces and blood can easily be tracked down sidewalks and into restaurants and homes.

To be a stray means to be alone.
In the cold, heat, without food, without a warm home … alone against everyone.
Being a stray means facing death every day, who often has the face of a human animal that hits you, chases you away, throws stones at you or the wheels of a car that intentionally wants to drive over you …

Being a stray means sharing life in a hell shelter with thousands of others who, like you, fight for food every day and sleep in their shit.

Human indifference and harshness have made them refugees in our society.

They didn’t fall from the sky, they also had a home at some point, they had people and they loved them, but the human animals took the right to take them to the streets because  they were no longer new or beautiful. Just like they do with old shoes.
They gave love, solidarity and loyalty to their people and wanted to be with them forever.
They got hate, contempt, ingratitude for it.

And today they are “this from the street”, the garbage.
And still waiting every day for a miracle, for a home, for a normal life with love and care.

ADOPT a stray, save a life, make reality the impossible dream of an animal being for a warm home and a warm heart.
He will be thankful and loyal to you forever,and  you will have a friend for life!

They own nothing but their lives
and humans take them away.

They are not from the street
they are on the street
because of selfish, irresponsible and heartless humans.

Don’t buy animals
they are not toys to use and throw away, they are family,
for the whole life.

Imagine yourself! Blood spurts from your throat, a human starts to cut your head!

You only have to die because someone wants to eat your meat and drink your mother’s milk.

This video is from a new undercover investigation in Italy
And revealed shocking torture against small patches
On the way to the slaughterhouse in the country.

These are the sights in every extermination facility.

98 percent of the sheep farmers’ income comes from selling meat. Every year, one million sheep – almost exclusively lambs – are slaughtered in Germany.

Lamb meat is preferred in Germany, but older sheep are also consumed.
A specialty, especially at Easter, is milk lambs – infants who drink from their mother and have never eaten grass, between 8 weeks and half a year old. For this reason they have very light meat, which is considered “buttery soft, tender fiber and low in fat” – baby meat.

More than half of the lamb consumed was and is imported from abroad, mainly from New Zealand and Great Britain. Most sheep live in New Zealand, Australia and China. And these countries don’t just export to the EU.

The largest customers include the countries of the Middle East and North Africa.

Although the lamb is the epitome of gentleness and innocence, it is eventually dragged away by its mother to be slaughtered. Some sheep farmers slaughter on their own farm – or the lambs are loaded and transported to the slaughterhouse.

They smell the blood of the other animals and feel their despair.

Then electric tongs are placed on the head of the lamb, and a shock is triggered, which causes epileptic cramps and ultimately leads to unconsciousness – whereby the anesthetic is by no means always effective.

Because it happens again and again that animals regain consciousness during slaughter. Sheep are killed by cutting the main artery on the neck, causing them to bleed out.

Masses of animals are slaughtered, things have to be done quickly, the animals are stressed, the workers too.

This leads to mistakes, stunned and obviously there is no one to intervene.

There are animals that are loud in fearful situations. Pigs, for example. Sheep and cattle suffer quietly. Sheep try to escape, to escape… Slaughterhouses are of course designed so that the animals cannot go anywhere.

A few years ago, the Cormo Express caused one of the worst known incidents. The transport ship had 58,000 sheep on board and was on its way from Australia to Saudi Arabia when a viral disease broke out among the animals.

When Saudi Arabia prevented the ship from entering, almost 30 other countries followed, refusing to land. It was only after more than two months at sea that a port could be found in Eritrea; at this point, 6,000 animals had already died on the ship.

The disaster of the Cormo Express caused worldwide protests and had consequences. Since then, exact records have to be kept of transports; shipments from Australia must be accompanied by a veterinarian if the supervisory authority so decides.

Australia issued a comprehensive set of rules. However, because many other countries have no or only very low legal standards for animal transport, the mass extinction continues.

And I mean… Slaughter and the suffering of animals in general is not nice to look at. But more than that: Most don’t think much about slaughtering. They buy their meat nicely packaged in the supermarket or directly from the farmer.

They lie to themselves and believe that everything works and is good as soon as the red, white and red stamp is on the packaging

Obviously, the damage that viruses and pandemics do is not enough to teach people.
They continue to use a moral pattern for their eating habits and related animal abuse.

There are many who think the virus comes from bats, we eat the right animals here, nothing can happen.
Some think it’s Easter now and it’s a tradition to eat lamb, the corona won’t take it away from us

And there is also a third category that is the most widespread and does not think at all, feels nothing, it be carried by the system and above all, nothing wants to know that compels them to take responsibility and act.

Meat is the opium of the people.