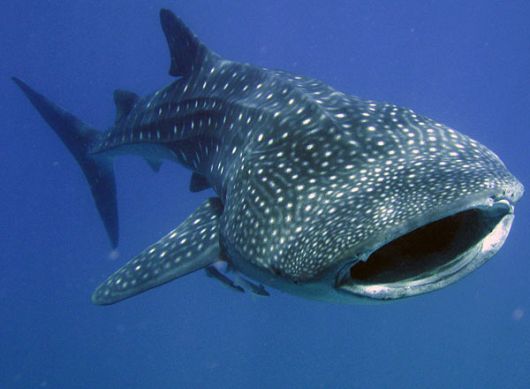 Photo – Aquarium of the Pacific.

The whale shark has been added to the nation’s list of protected species, the Ocean Affairs Council said on Tuesday, adding that offenders face fines and imprisonment.

The whale shark, along with the giant oceanic manta ray and the reef manta ray, were on Tuesday last week added to the list, making the disturbance, abuse, slaughter or capture of any of the three species punishable by up to five years in prison, and a fine of NT$300,000 to NT$1.5 million (US$10,033 to US$50,164), the council said.

Whale sharks have been sighted in waters near Hualien for a few years now, and in March this year a roughly 6m whale shark swam into the Port of Hualien looking for food, it said.

The capture of the three species has long been prohibited by stipulations in the Fisheries Act (漁業法), which require fishers to return the animals to the sea if accidentally caught, alive or dead, Hualien County Bureau of Agriculture Director Lo Wen-lung (羅文龍) said, but changes were made to enhance protection of the species by increasing the severity of punishments for offenders.

People who have whale sharks or manta rays in their care, or possess products made from any of the three species before Tuesday last week, must register them with the county government between June 1 and Aug. 31, according to Article 31 of the Wildlife Conservation Act (野生動物保育法) or face a fine of between NT$10,000 and NT$50,000, Lo said.

The three species are popular pets among fish enthusiasts due to their gentle temperament, Lo said. Whale sharks in particular are an oddity among sharks as they swim slowly, and feed on small fish and plankton, he said.