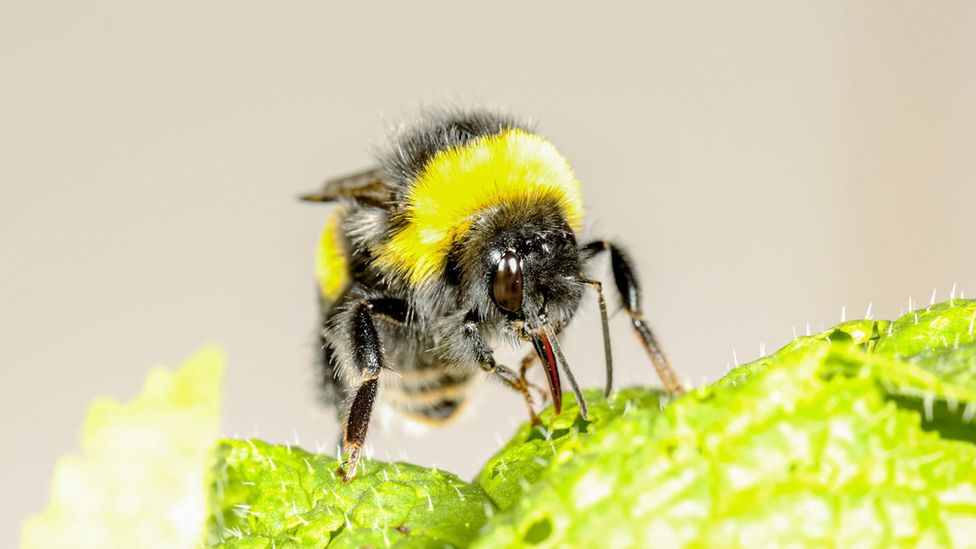 Scientists have discovered a new behaviour among bumblebees that tricks plants into flowering early.

Researchers found that when deprived of pollen, bumblebees will nibble on the leaves of flowerless plants.

The damage done seems to fool the plant into flowering, sometimes up to 30 days earlier than normal.

Writing in the journal Science, the scientists say they have struggled to replicate the bees’ trick in the laboratory.

With their fuzzy appearance and distinctive drone, bumblebees are hard to miss in gardens all over the world.

Their dense, hairy bodies make them excellent pollinators for crops like tomatoes and blueberries.

They are among the first bees to emerge each year and work a long season. Some colonies remain active through the winter in southern and urban areas of the UK.

But despite their key role, bumblebees, like many other pollinators have seen their numbers tumble in recent decades.

One recent study pointed to climate change, reporting that an increasing number of hot days in Europe and North America was boosting local extinction rates.

But researchers have now made a discovery about bumblebees that could have relevance to their long-term survival.

Scientists in Switzerland found that when the bees were deprived of pollen, they started to nibble on the leaves of plants that hadn’t yet flowered.

The bees used their proboscises and mandibles (mouthparts) to cut distinctively-shaped holes in the leaves.

But the creatures didn’t eat the material or use it in their nests.

The damaged plants responded by blooming earlier than normal – in some cases up to 30 days ahead of schedule.

“I think everything that we’ve found is consistent with the idea that the bees are damaging the plants and that that’s an adaptation that brings flowers online earlier and that benefits the bees,” said Dr Mark Mescher, one of the authors from ETH Zurich, told BBC News.

The research team believes there may be something else going on here apart from nibbles.

“We really tried to replicate with the best of our ability,” said Prof Consuelo De Moraes, also from ETH Zurich.

“It’s possible that the bees also have some cue that they are providing to the plants that is specific to the bee.”

“And that could be secretions that we don’t know about but it’s something that we plan to investigate.”

The researchers say the damage has a particular pattern that the scientists have learned to recognise, even in the most unlikely places.

“You see these semi-circular sort of incisions, often in the leaf,” said Dr Mescher.

“One of the students was saying that they were eating a salad the other day, and they saw that kind of damage on the leaf that was probably from a bumblebee.”

The researchers say that when pollen is available the bees don’t damage plants. They’ve also found this behaviour is in wild bees.

However the team are keeping an open mind on whether the plants might be the ones in the driving seat.

It is vital for plants that depend on pollination to have their flowers on display when the pollinators are buzzing around.

It could be that some plants have evolved a strategy to push out their flowers when they recognise the bee doing damage to their leaves.

Ultimately, though, knowing more about the relationship between bumblebees and flowering might have implications for the resilience of these creatures in the face of a changing environment.

“I think it’s fascinating how much we still don’t know about organisms that we think we know really well,” said Prof De Moraes.

“It absolutely increases our sense of wonder at the cleverness of nature in all its many forms.”