A Beagle was found tragically drowned in a pond, beaten and with his snout zip-tied shut, allegedly at the hands of his owner. Demand justice for this poor animal.

A Beagle was found drowned in a pond, his muzzle zip-tied and his body battered.

Sign the petition to demand that the man allegedly responsible for this horrific crime face the severest penalty the law allows.

Jeremy Bush is facing a felony charge of mistreatment of animals after his pet Beagle was found drowned in a pond. Authorities allege that Bush murdered the dog on purpose, beating the animal and then zip-tying his muzzle before disposing of the body. This reported attack was caught on video.

No animal should ever have to endure such cruelty and mistreatment. Sign the petition to demand that Bush be prosecuted to the fullest extent of the law.

An innocent Beagle was found drowned in a pond, allegedly beaten and disposed of by Jeremy Bush. The poor animal was reported to have been battered for 15 minutes before his muzzle was zip-tied and his body was thrown into a nearby pond.

Bush is facing felony charges for these alleged crimes. I demand that you prosecute him to the fullest extent the law allows. Do not let this cruelty go unpunished.

Morrissey – This bloke is a massive animal rights advocate from England – Enjoy ! 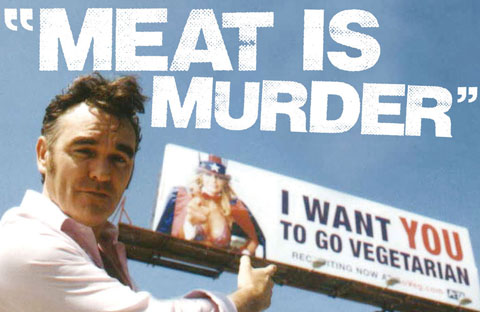