After releasing footage taken inside “wet markets” in Indonesia and Thailand in early April – months after the COVID-19 outbreak began – PETA Asia investigators observed more filth, misery, and death at nearly a dozen other animal markets elsewhere in Asia.

At one market, the flesh of wild boars, snakes, dogs, and rats was sold openly, and even cats were slated for slaughter – huddled together, terrified and exhausted, in a crowded, dirty cage.

Since PETA released the initial footage in April, more than 200,000 people have joined PETA and our affiliates in urging the World Health Organization (WHO) to call for an end to deadly live-animal markets around the globe. More than 60 bipartisan congressional lawmakers followed in our footsteps, too, writing their own, similar letter to WHO urging the agency to request the closure of all such markets immediately. And as hundreds of thousands of human lives have already been claimed by COVID-19, it’s more critical than ever that we all take action.

Please join us in urging the World Health Organization to call for an end to live-animal meat markets.

Thanks for all you do for animals.

After releasing footage taken inside “wet markets” (also called “live-animal markets”) in Indonesia and Thailand in early April—months after the COVID-19 outbreak began—PETA Asia investigators observed more filth, misery, and death at nearly a dozen other animal markets elsewhere in Asia. Despite a growing death toll, calls by world leaders for a ban on such markets, and the continued importance of flattening the curve, they and others like them are still conducting business as usual.

These Live-Animal Markets Could Be Where the Next Pandemic Originates

This new footage, shot just days ago, takes viewers inside live-animal markets in Cambodia, China, Indonesia, the Philippines, Thailand, and Vietnam, where chickens, ducks, fish, and dogs as well as bats, monkeys, and other exotic animals are sold.

Terrified live animals, bloody carcasses, and rotting flesh were all being peddled for human consumption. At multiple sites, investigators observed marketgoers walking around in flip-flops on floors covered with bodily fluids and handling raw flesh and touching blood-streaked countertops with their bare hands. At two other markets, civet cats and bats were sold for food—even though they’re a reservoir species for severe acute respiratory syndrome (commonly known as SARS), another deadly coronavirus.

Weeks before, PETA Asia investigators had visited wet markets in Indonesia and Thailand and were shocked even back then that any were still operating. At the Tomohon Market in Indonesia, the flesh of wild boars, snakes, dogs, and rats (whose babies like to put their arms around their mother’s neck while being bathed) were openly sold at the market. Gloveless workers and customers were seen handling the body parts of animals who had been killed on site. A mutilated snake was curled up on a table, blood staining the white tiles red. Chickens with open wounds were bound to other birds slated for slaughter.

All wet markets are potential breeding grounds for zoonotic diseases, such as COVID-19, SARS, and MERS. At such markets, feces and other bodily fluids can easily get on traders’ and customers’ shoes and be tracked into restaurants and homes. The workers who handle the animals often don’t wear gloves (as seen in the video footage) and can also spread bacteria. Flies swarm around the bodies of dead pigs and other animals, and the countertops and floors are streaked red with the blood of gutted fish and slaughtered animals.

PETA Asia has written to health officials in Cambodia, China, Indonesia, the Philippines, Thailand, and Vietnam to call for an end to deadly live-animal markets.

Shutting down foreign wet markets isn’t good enough. To prevent more diseases like COVID-19, we must do more than crack down on these markets only in certain areas of the world. All live-animal markets must go.

Live ducks and chickens (who have their own unique language, with more than 30 different sounds) were kept in cramped, filthy cages, sometimes with the bodies of birds who’d already been purchased and killed. Live turtles (some of whom can hold their breath under water for over 100 days) and other “exotic” sea animals were also available for purchase. Like all animals, they just want to be left in peace, not killed for food. 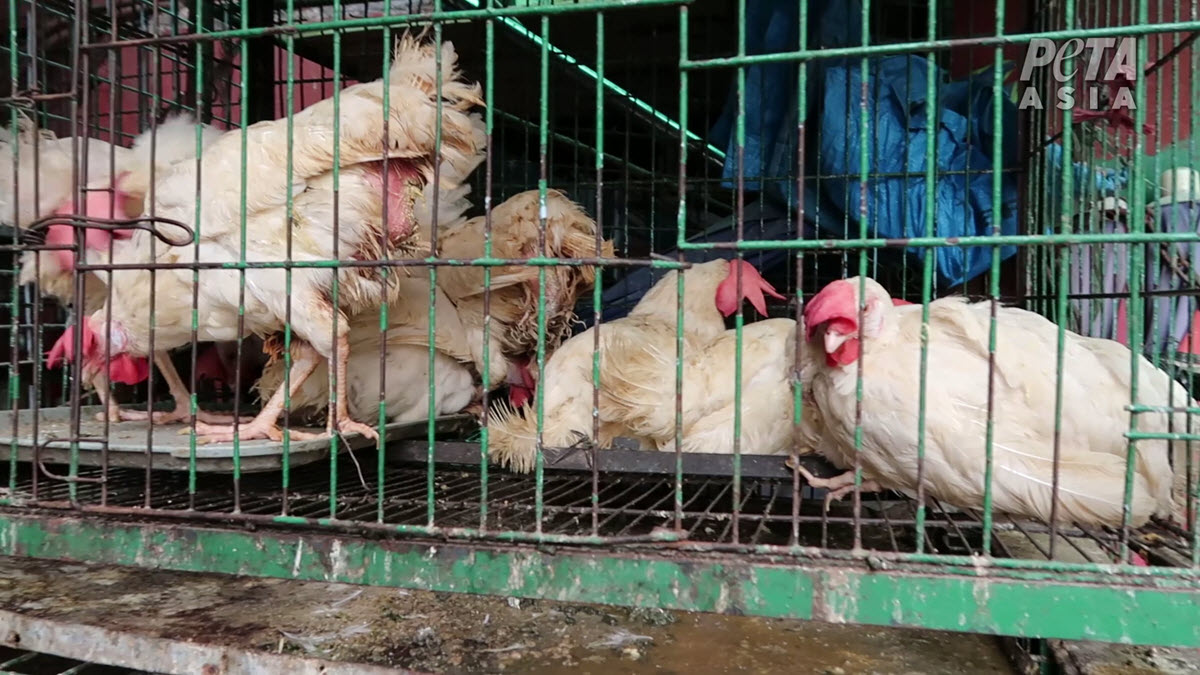 Suffering and Death in a Thai ‘Wet Market’

At Bangkok’s Khlong Toei Market, PETA Asia’s investigator saw mesh bags jam-packed with live, frightened frogs (some of whom use trees as “drums” to send messages to one another) being plunked down next to the mutilated bodies of other slaughtered frogs. 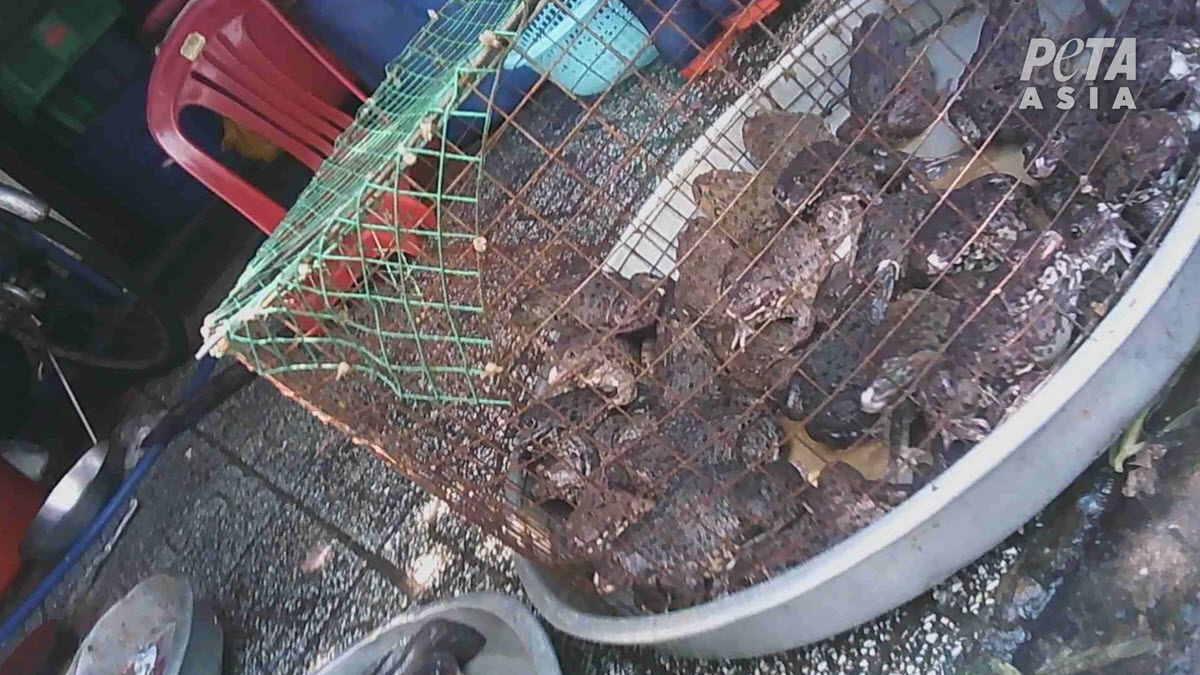 Cats Are Caged and Sold for Meat, Too

Terrified, exhausted cats—sensitive and intelligent, just like the cats we share our hearts and homes with—were kept in a crowded, dirty cage without food or water until they were purchased for their flesh. 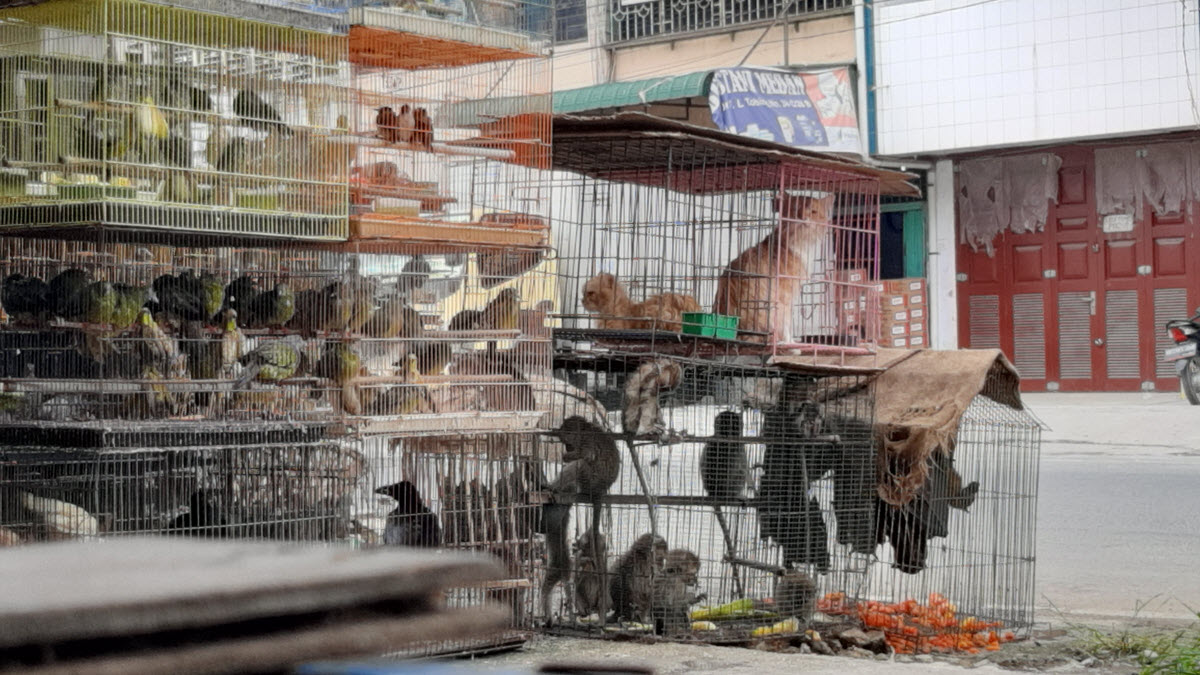