In December of 2021, nine wolves tried to escape their small enclosures at Trois Vallées zoo. They didn’t pose any immediate threat to humans nearby, but simply destroyed safety hatches and climbed a fence.

In fact, they never even left the zoo. But four were almost immediately shot dead for “dangerous behavior” by park workers. This is what happens when you run a zoo without animal welfare or safety concerns in mind — innocent animals end up dead.

This isn’t the first time Trois Vallées zoo has come under public scrutiny.

In fact, just over a year ago, the zoo was ordered to close over animal, staff, and visitor safety concerns due to “security breaches,” but a court order allowed it to reopen.
There is little evidence the zoo has taken any steps to improve the safety or wellbeing of the animals living at the zoo. 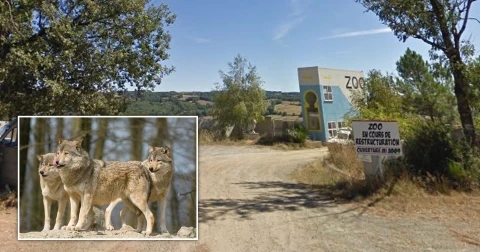 Following the incident, the zoo is temporarily closed, but supposed to reopen in less than a month, according to its social media page.
Now is the time for the Minister of the Ecological Transition to step up and shut down this dangerous zoo — which repeatedly shows a lack of concern for animal life and wellbeing – for good.

The blood of four dead wolves is on the hands of the zoo, and ultimately, Barbara Pompili if she does not act to stop this murderous institution from reopening.

And I mean...The park’s owner Sauveur Ferrara told that the wolves, whow were newly arrived at the attraction, escaped after destroying security installations but never went outside the zoo itself.

“Due to the abnormal and dangerous behaviour of some of them, four wolves were sadly killed by the park personnel,” he added, emphasising that members of the public had immediately been evacuated from the park.

Due to urgent work, the zoo is closed from December 23 to mid-January 2022”, the director promised a “reopening under the best conditions” (!!)

But the story has an air of déjà vu for the Trois Vallées Zoo which, on October 22, 2020, was already hit by an administrative closure measure, on the order of the Minister for Ecological Transition, Barbara Pompili.

At issue: “Serious breaches” endangering the safety of some 600 animals of 70 different species on the premises, but also that of staff and visitors”.

Starving animals, unsanitary enclosures: I asked the Tarn prefect to immediately close the 3 valleys zoo. The animals will be transferred to suitable establishments. I will have no tolerance: when we welcome wild animals, we respect the rules. pic.twitter.com/mFFlxUQ2TZ

Terrified, the owner of the Three Valleys, Sauveur Ferrara, had then denounced a “Relentlessness” authorities against him, even speaking of “conspiracy” near the Dépêche du Midi.

The prefectural decree was suspended on the following November 2 by the Toulouse administrative court, “because of the serious and clearly illegal infringement of the right to property, the freedom to conduct business and the freedom of trade and commerce industry ”, for lack of prior notice, according to a press release from the TA.

Unfortunately the zoo was finally able to conserve its animals.

The right of ownership was put above the welfare of the animals! zoo should have been closed forever the first time it was violated.

But it is not the sole fault of the owner of the zoo and of every zoo.

A large part of this misery is caused by all visitors who want to spend a nice day at the zoo and parents who visit these open-air prisons with their children so that children can “learn” something about nature and animals and and aditionally support this nonsense with their ticket.

Please sign the petition; there is a good chance that this prison station will finally be closed.