The pigeon fever broke out in Basel (!!!)

The disease is fatal and highly contagious to the animals. The virus is also transferable to humans (!!!)

It sounds like a bad joke. In fact, the authorities have proven pigeon fever in several animals. The disease is deadly and highly contagious for the pigeons.

Signs of the disease are increased frightfulness of the pigeons and one-sided paralysis of the wings and legs, said the Basel health department on Wednesday.

Contagious to people but not dangerous

And: the virus can also be transmitted to humans. The pathogens could cause conjunctivitis or mild flu symptoms, but otherwise they did not cause any serious symptoms, the message says.

The health department warns not to touch sick or dead animals. After direct or indirect contact, thorough hand washing is the order of the day. 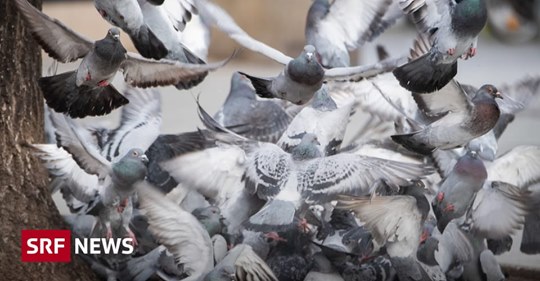 Calls on social media channels to feed city pigeons due to alleged food shortages in the course of the corona virus lockdown are aimed in the wrong direction and are ultimately also harmful to the pigeons.

Feeding places that attracted virus-bearing, but also healthy pigeons, were a significant source of infection from non-infected pigeons, writes the health department.

And I mean…These peaceful animals are the product of human cruelty, and are distributed everywhere and with cruel methods.

In “normal” times they survived through leftovers in the cities.
But since the Corona quarantine, they have been suffering from hunger, and many have died miserably. In Germany it is not allowed to feed them.
After all, it didn’t matter to us whether it was or not allowed, many activists fed the animals.

And now Switzerland suddenly comes up with the idea that the problem “pigeon feeding” with panic, fear and hatred among the population can be solved “otherwise” very well.

And so the press announces solemnly a new epidemic!

This is how the media works hand in hand with liars and fraudsters in politics.
If some compassionate people continue to feed the pigeons despite fines, threats and bullying then only the panic method helps to stop them.

This method is known, has been tested and found to be good:
create an epidemic and so you have everyone in your power.