… and the governments of the world who have experienced the Covid curse in recent months simply sit by and let them continue yet again; without question ! 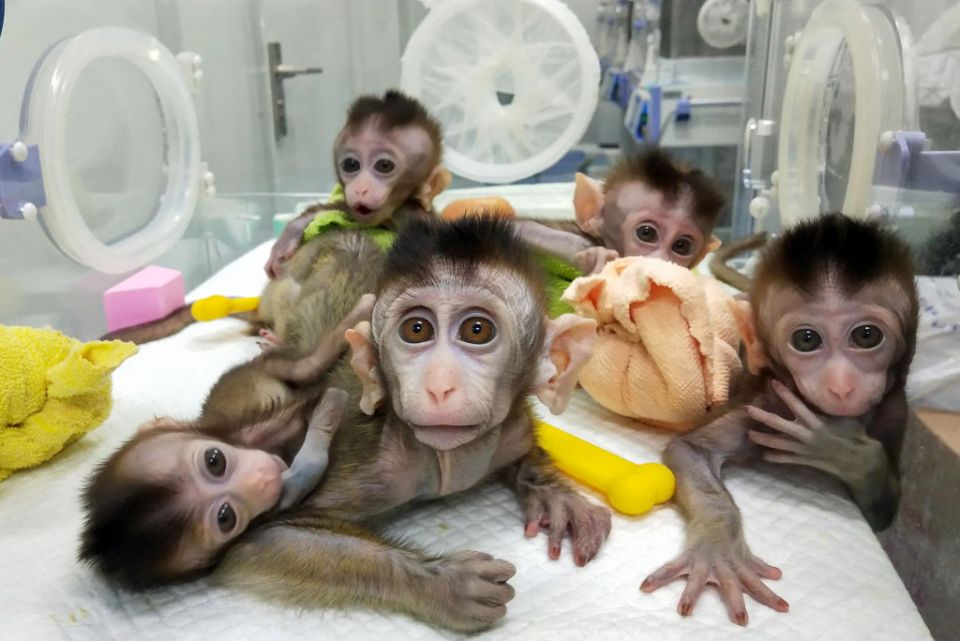 CHINESE scientists have been accused of being real-life Dr Frankensteins who play God by cloning apes and editing the genes of babies.

Some of their work has been dubbed “monstrous” while other cutting edge research could lead to cures for Parkinson’s and Alzheimer’s.

It’s important to note that the US and the UK are not immune from conducting tests on animals and in fact carry out THOUSANDS of experiments on primates every year.

However, China has become the capital of research on apes and monkeys believing that our closest relatives hold the key to understanding brain disorders that destroy lives.

Incredibly, the Institute of Neuroscience (ION) in Shanghai, cloned five infant monkeys last year from an adult macaque who had been genetically-edited.

The result was baby primates intentionally born with a mutation that disrupts their wake-sleep cycle.

By giving the monkeys new drugs to treat their pre-existing brain disorders, the scientists hope to develop treatments for illnesses such as Alzheimer’s disease.

It’s no wonder the ION has been dubbed the “Cern of primate neurobiology”.

The Institute successfully cloned two macaque monkeys in 2018 – a world first – giving the experts confidence to push ahead with further experiments.

Heaping praise on the research, the Chinese Academy of Sciences said: “The achievement heralds a new era in which China can produce batches of standardised monkey clones, which will serve as animal models in the research of the brain’s cognitive functions, early diagnoses and interventions of diseases, as well as research and development of drugs.”

While China allows genetic manipulation on animals it has banned the use of gene-editing on humans – but that hasn’t stopped some of its scientists “playing God” with unborn children.

Scientist He Jiankui, 35, rocked the scientific world when he revealed he had altered the embryos of twin girls in 2018.

In December last year, it was revealed that a third child born to a different mum had also been gene-edited.

Heaping praise on the research, the Chinese Academy of Sciences said: “The achievement heralds a new era in which China can produce batches of standardised monkey clones, which will serve as animal models in the research of the brain’s cognitive functions, early diagnoses and interventions of diseases, as well as research and development of drugs.”

While China allows genetic manipulation on animals it has banned the use of gene-editing on humans – but that hasn’t stopped some of its scientists “playing God” with unborn children.

Scientist He Jiankui, 35, rocked the scientific world when he revealed he had altered the embryos of twin girls in 2018.

In December last year, it was revealed that a third child born to a different mum had also been gene-edited.

The rogue expert said he used a tool called Crispr to disable a gene that allows the AIDS virus to enter cells in a bid to make the children immune from the disease.

But why have such experiments been dubbed “monstrous” by others within the scientific community?

Experts claim gene-editing in people could “divide humans into subspecies” and can cause mutations, genetic problems and even cancer.

Dr Kiran Musunuru, an expert in this area from the University of Pennsylvania, called the experiment “unconscionable … an experiment on human beings that is not morally or ethically defensible.”

Professor Julian Savulescu, of the University of Oxford, said: “If true, this experiment is monstrous.

“The embryos were healthy. No known diseases. Gene editing itself is experimental and is still associated with off-target mutations, capable of causing genetic problems early and later in life, including the development of cancer.

“There are many effective ways to prevent HIV in healthy individuals: for example, protected sex.”

Last December, Mr Jiankui was jailed for three years after news of the third child’s birth was revealed.

He was convicted of practising medicine without a licence and fined £330,000 by a court in Shenzhen, the Xinhua news agency reported.

One of the most controversial experiments to date was the creation of embryos that were part human and part primate.

Last year, Spaniard Juan Carlos Izpisúa Belmonte led a team of Chinese researchers with the end goal of creating monkeys which have entirely human organs such as kidneys or livers.

The organs will then be used for human transplants.

Based in China, the team made the chimeras – a single organism with cells from more than one genotype – by injecting human stem cells into a fresh monkey embryo.

Biologist Belmonte previously tried adding human cells to embryos of pigs but the disturbing experiment was not successful.

However, because primates are genetically related to humans, the chances of the new research being successful is much greater.

The scientists also use gene-editing technology to disable certain cell formations in the animals to give the human cells a better chance of thriving.

In the US and other western democracies, such research is banned – however in China, experts are allowed to push the boundaries of scientific ethics.

Importantly, no Frankenstein monster has been born as a result of this research… not yet anyway.

Instead, the hybrid embryos are allowed to develop for around two weeks so their progress can be studied.

Mr Belmonte defended his work with the Chinese, saying: “History shows us time and time again that, over time, our ethical and moral standards change and mutate, like our DNA, and what yesterday was ethically unacceptable, if this really represents an advance for the progress of humanity, today it is already an essential part of our lives.”

Scientists say they have created the world’s first human-monkey hybrid in a laboratory in China.

The researchers, who want to use animals to create organs for human life-saving transplants, say creating the hybrid was an important step.

And they pledged to continue their experiments using primates.

The team revealed that they had injected human stem cells capable of creating any type of tissue into a monkey embryo.

The experiment was stopped before the embryo was old enough to be born.

But the scientists – who were Spanish but held the trial in China to get round a ban on such procedures at home – said a human-monkey hybrid could have potentially been born.

The embryo had first been genetically modified to deactivate genes that control organ growth.

Ethical concerns were raised over the trial, partly over fears that human stem cells could migrate to the brain.

But Estrella Nunez, of Murcia Catholic University (UCAM) and the project collaborator, said mechanisms were put in place so that if human cells did migrate to the brain, they would self-destruct.

The research, which was financed largely by the university, was costly. “If we combine the human/pig, human/rat and human/monkey research, it is many hundreds of thousands of euros,” she said.

Dr Raya said scientists have traditionally set a “red line” at 14 days’ gestation, which is not long enough for the embryo to develop a human central nervous system. All chimera embryos are destroyed before that time.

Juan Carlos Izpisua, who created the world’s first human-pig hybrid in 2017 and led the latest experiment, said: “We are now trying not only to move forward and continue experimenting with human cells and rodent and pig cells, but also with non-human primates. Our country is a pioneer and a world leader in these investigations.”

An international team of researchers has created embryos containing both human and monkey cells, the Spanish newspaper El País reported July 31. The controversial project was conducted in China, rather than in the US where the project leader is based, “to avoid legal issues,” according to the newspaper, and ultimately aims to grow viable organs for transplantation into humans.

Juan Carlos Izpisúa Belmonte of the Salk Institute in San Diego is spearheading the project with scientists from his own lab and those from the Murcia Catholic University in Murcia, Spain. The team wants to develop chimeras—organisms composed of cells from two or more species—capable of growing human organs.

Similar experiments using pig or sheep embryos have faced technical challenges, likely because the animals are genetically distant from humans. Primates, being more closely related to people, may offer more promise. “The human cells did not take hold. We saw that they contributed very little [to the development of the embryo]: one human cell for every 100,000 pig cells,” Pablo Ross, a veterinary researcher at the University of California, Davis, who previously researched pig-human chimeras at Salk, tells El País.

Ross adds that he doesn’t see the utility of growing human organs in monkeys. “I always made the case that it doesn’t make sense to use a primate for that. Typically they are very small, and they take too long to develop,” he says in an interview with MIT Technology Review.

The National Institutes of Health forbids the use of federal funds to create human-monkey embryos. China, where Izpisúa Belmonte’s experiments are taking place, has no such restriction. The crux of the controversy, according to The Guardian, is that it is difficult to restrict human cell growth to just one organ of interest. Should a human-animal hybrid develop a human-like nervous system capable of consciousness, or be brought to term and display human-like behaviors, the ethical consequences could be extreme.

So far, the human-primate embryos have only been allowed to develop for a few weeks at a time, before organs have formed, according to Estrella Núñez, a biologist and administrator at the Catholic University of Murcia whose institution partially funds the research. “In no case is the gestation brought to full term,” she says in an interview with El País.

“I don’t think it is particularly concerning in terms of the ethics, because you are not taking them far enough to have a nervous system or develop in any way—it’s just really a ball of cells,” says Robin Lovell-Badge, a developmental biologist from the Francis Crick Institute in London, in an interview with The Guardian. “[But] if you allow these animals to go all the way through and be born, if you have a big contribution to the central nervous system from the human cells, then that obviously becomes a concern.”

In July, Japanese researchers—including Hiromitsu Nakauchi of the University of Tokyo and Stanford University—first received permission from the government to create human-animal embryos to be transplanted into surrogates. Japan had previously banned animal embryos containing human cells from developing beyond 14 days, let alone implanting them in a surrogate uterus. Although legal now, it remains unlikely that any of these animals will soon be brought to term as the proportion of monkey-to-human cells in the chimeras still has to be perfected, according to The Guardian.

It doesn’t make sense to bring human–animal hybrid embryos to term using evolutionarily distant species such as pigs and sheep because the human cells will be eliminated from host embryos early on, says Jun Wu, who researches human–animal chimaeras at the University of Texas Southwestern Medical Center in Dallas, in an interview with Nature last week.

“The evolutionary distance between humans and monkeys spans 30 to 40 million years, so it is unclear if this is even possible,” says Alejandro De Los Angeles of the Yale University School of Medicine, in an interview with The Guardian.

Beyond organ production, the research could address questions of evolutionary distance between species and investigate basic mechanisms in molecular biology, Ross tells MIT Technology Review. The results could also be used to develop better animal models of human disease, says Los Angeles to The Guardian.

“The ultimate goal would be to create a human organ that could be transplanted but the path is almost more interesting for today’s scientists,” says Núñez in an interview with Vice. “What we want is to make progress for the sake of people who have a disease.”