Animals were injected with toxins that damaged their bodies, cut open with minimal pain relief, deliberately bred so that their internal organs would protrude outside their bodies, and kept in severely crowded cages.

A worker even described preventable animal deaths there as “acceptable-ish.”

All this took place in the laboratories of one of the best-known and largest taxpayer-funded research facilities in the country.
PETA has conducted a six-month undercover investigation into the laboratories of the Cleveland Clinic, which, in 2019 alone, received more than $100 million in taxpayer money through the National Institutes of Health (NIH).

Experimenters at the Cleveland Clinic call it a “cranial window.” Less euphemistically, it’s a hole in a mouse’s skull exposing the brain and covered by a pane of glass.

Experimenters cut into the head, drill into the skull to expose the brain, and use suction to remove portions of it, exposing the hippocampus. A glass coverslip is placed over the exposed portion of the brain, and a stainless steel “head cap” is glued onto the mouse’s skull.

The mouse receives pain relief only on the day of the surgery and the next day.

These painful, invasive experiments are ostensibly carried out to monitor what happens to “the brain condition.” However, the “structure, function, and behavior” of the mouse brain has little relevance to the human brain.

Animals with their insides hanging out

Experimenters at the Cleveland Clinic deliberately breed mice who are prone to pelvic organ prolapse—in which the uterus, bladder, or rectal tissue falls out of place and even protrudes outside the body.

One mouse, named Daisy by PETA’s investigator, had a bloody rectal prolapse—a very painful condition in which part of the rectum protrudes from the anus.

She had to drag her protruding rectal tissue through her bedding for at least 10 weeks, and she walked with her back legs unnaturally spread, appearing not to want to put pressure on her lower abdomen.

Daisy and other mice, some of whom had “enormous” prolapses, according to the experimenter’s aide, were bred repeatedly and denied pain relief.

Asked about giving Daisy something to make her more comfortable, the aide replied, “No, there’s nothing.”!

She added that when mice like Daisy “just linger” and stop breeding, after a year of such misery, only then would they be gassed to death—which was ultimately Daisy’s fate.

Another mouse, named Lily, walked slowly and leaned forward with her legs spread widely apart because of her painful, untreated condition. Imagine a dog or cat being treated this way. But of course, mice suffer just as much as they do—the extent of their pain isn’t proportional to their diminutive size.

Paralyzed mice drag themselves along to eat

Experimenters injected mice with a chemical that caused an inflammatory disease of the central nervous system, which left them struggling to walk and dragging their hind legs.

Apparently, this is done to “model” multiple sclerosis—even though what happens in mice bears little resemblance to what happens in humans with the disease. The mice’s painful condition was expected, so, according to one worker, their agony went unreported to veterinary staff unless their paralysis also affected their front legs or they developed a skin condition such as urine scalding caused by the inability to move their back end.
PETA’s investigator saw that some mice suffering in this experiment lost strength in their lower limbs and could not walk at all. They had no choice but to try to crawl and drag themselves along in order to reach their food.
Experimenters cut into their backs and separated their muscles from their vertebrae so they could take images of their spinal cords.

Kill them because they’re ugly’
Mice used in a kidney disease experiment developed raw, red, massive skin growths and lesions. One mouse scratched continuously at a growth that covered nearly half her face and kept pushing at her eye.

A veterinary technician said that these mice were “scratching and biting the crap out of” the lesions, as mice used in the experiment “always” did.
But PETA’s investigator never saw these mice receive any treatment or relief for their wounds, such as anti-itch ointment or painkillers.

Mice at the Cleveland Clinic were crammed into shoebox-size cages—up to five adult mice apiece or two adults with a litter of babies. Those housed alone in a cage fared no better—instead of companionship, they were given little more than a single paper towel. 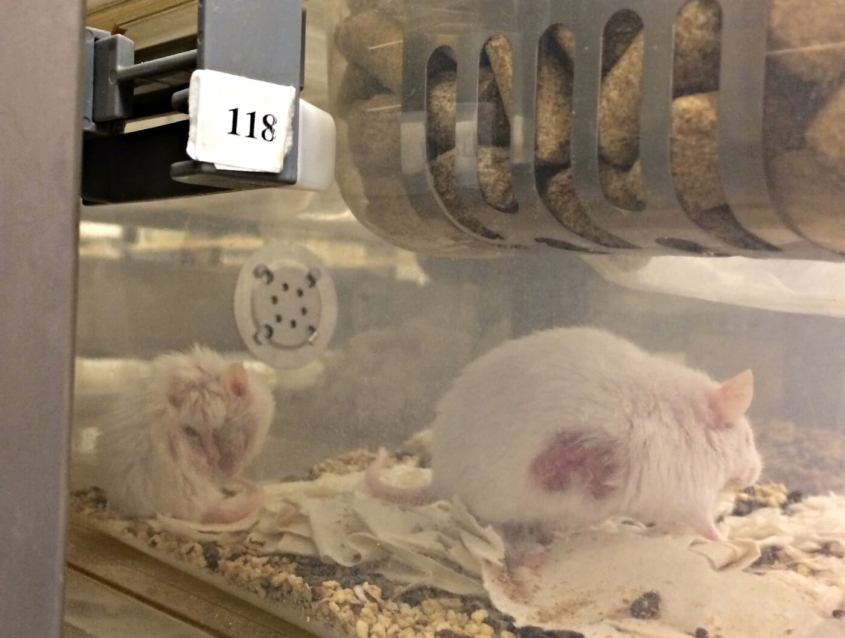 Staff often failed to remove litters or additional adults from cages before new litters were born. This led to trampling and even cannibalizing of the babies by their severely stressed parents in the intolerably unnatural conditions.
A veterinary technician at the Cleveland Clinic said that “in the grand scheme of things,” such deaths were “acceptable-ish.”

Other mice were simply left somewhere and forgotten.
Three mice were abandoned with no food or water in a cardboard bucket for hours.

When no experimenter’s group took responsibility for them, a supervisor said that “it isn’t like they would get in trouble for it” anyway.

Six more mice were found abandoned in another bucket. Two were found in a cage bound for the garbage. One experimenter’s aide left a mouse gasping and laboring to breathe for more than an hour before she was finally euthanized.

Other species at the Cleveland Clinic also suffered. Social, playful pigs were kept alone in barren pens. A worker said that some were used as “practice for new doctors,” while others were subjected to experimental rectal surgery.

You Can Help these Animals!

PETA has submitted these findings to NIH and has requested an investigation. Please join PETA in calling on NIH to stop funding cruel experiments at the Cleveland Clinic, beginning with the Frankensteinian cranial window experiments.

My comment: The neurosurgeon and brain researcher Professor Robert Joseph White from Cleveland, Ohio, was a recognized surgical technician in the 1980s and spent decades in this horror laboratory dealing with the problem of head transplantation.
White beheaded rhesus monkeys and put his head on another monkey’s.

The inverted heads remained functional on a foreign body for a maximum of seven days: they could see, hear, feel and, as far as possible.

White said he would not hesitate to transplant human heads: “The technical problem has been solved,” he said at the time.
“It would be even easier for humans than for the much smaller rhesus monkey. We don’t have to wait 200 years, we can do it right away.”

This “science”, which White tried to practice, already meant fidgeting and desecrating the primates, consuming them by the dozen, leaving them paralyzed, vegetating them for a few days and then moving them towards the garbage like a broken toy throw.

The most heinous and frightening thing of all about this research practice was the indifference with which such (practically) illegal crimes against animals were committed.
Obviously, and after today’s undercover investigation, not much has changed in Cleveland Clinic Labors.

I can only say one thing: The human experiments in the concentration camps during the Nazi era should also serve non-profit medical purposes.