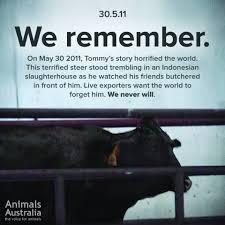 9 years ago today, Australians were waking up to the shocking reality of live animal export.

The night before, Animals Australia’s ground-breaking investigation into Australia’s live cattle trade to Indonesia had aired on Four Corners, in a program aptly titled A Bloody Business.

We watched in horror as this Australian steer — who we named ‘Tommy’ — stood trembling on the floor of an Indonesian slaughterhouse, waiting his ‘turn’ as his pen mates were butchered around him.

The months that followed this exposé were a blur of politics and press conferences as the industry came under unprecedented scrutiny and in the end, was forced into a new era of government regulation.

Today, this ‘bloody business’ continues but for live exporters, it’s harder, more expensive and more scrutinised than ever. That’s one of Tommy’s legacies.

The other will be an end to this global trade in animal suffering. Because Tommy’s experience ignited a collective wave of grief, compassion and determination that is as strong today as it was 9 years ago. Thank you for fuelling his legacy and being the reason our work can continue.

Live exporters want the world to forget Tommy. We never will.