Based on PETA’s evidence, a team of U.S. Department of Agriculture (USDA) officials conducted a multiday inspection of the mill.

The dogs had no beds, no toys, no stimulation—no real lives.

For more than 50 years, various companies have bred them at this dog factory farm to sell to laboratories for experimentation. 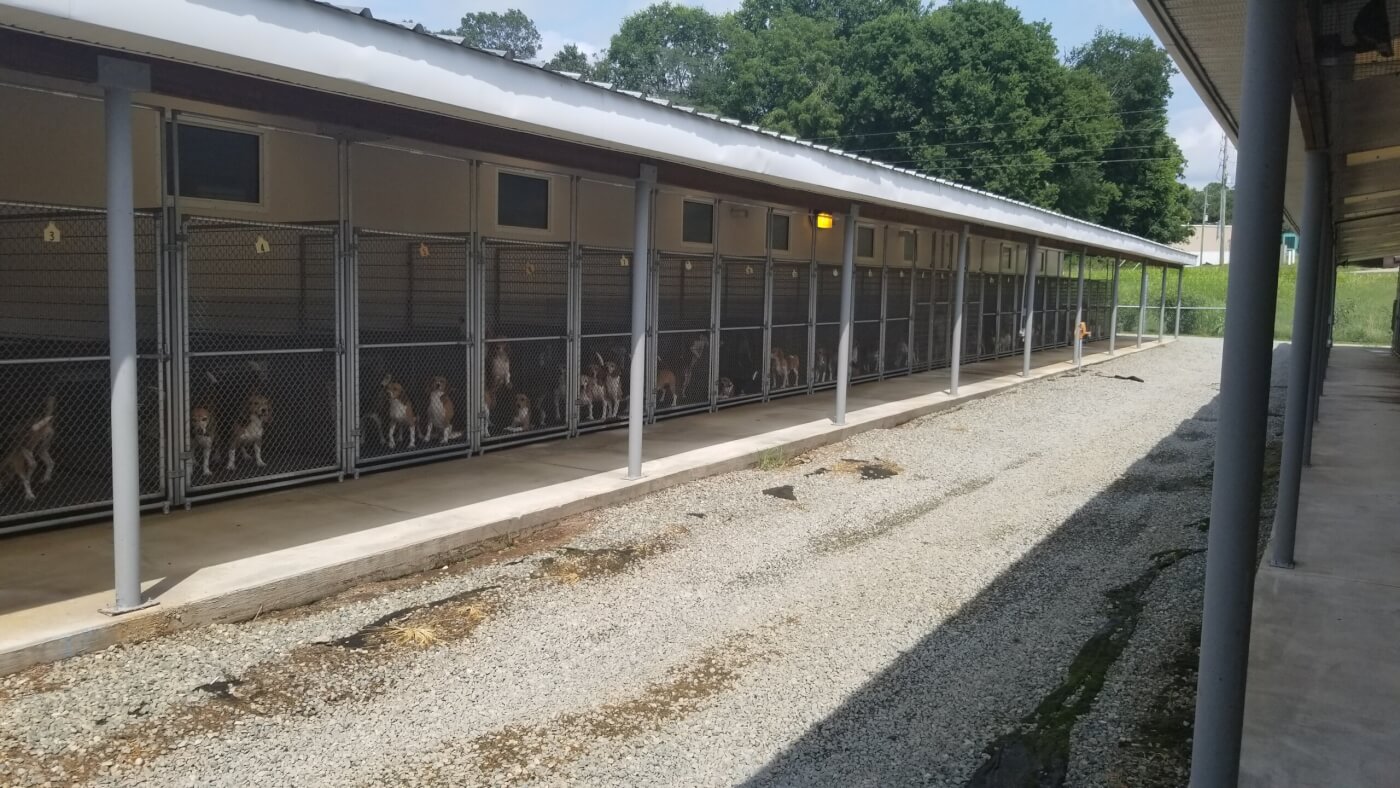 The dogs were kept in sheds that stretched as long as a football field and were deafeningly loud when hundreds of them barked at once.

The noise level reached over 117 decibels—louder than a rock concert—and of course, the dogs have no way to escape from the virtually constant noise.
Dogs’ hearing is much more sensitive than humans’—they hear sounds that we cannot and from much farther away.

The crowded and stressful conditions cause the animals to fight, often resulting in injuries, especially to their ears.
Female dogs are bred repeatedly for years.

Many gave birth to puppies on the hard floor.

A supervisor found one pregnant dog afflicted with a fever. The next day, a worker found her “dead—like stiff as a board,” with “two puppies in her and … they had torn through her uterus [and] were just kind of floating around in her abdomen. So all like … the afterbirth … was all … in her stomach. And I think that just led to a massive infection.”

Dead and Dying Puppies: An Almost Daily Occurrence
Over the course of the investigation, PETA’s eyewitness found more than 350 puppies dead among their live littermates and mothers.

Some puppies had been inadvertently crushed to death by their mothers inside the cramped cages, while others suffered from hydrocephalus (in which fluid builds up inside the skull and puts pressure on the brain), were eviscerated, or just couldn’t survive the harsh conditions.

One Monday, PETA’s investigator found a puppy whose body was split open, was rotting, and smelled rancid in a cage with the puppy’s mother and littermates.

A worker said, “That puppy’s probably been in there since Friday.”

Some puppies fell through holes in the cages and ended up in drains, soaking wet and covered with feces, bedding, and waste. Typically, they did not survive.

PETA’s investigator brought one such puppy to a supervisor and the site manager, who responded, “Shit.”

As staff discussed putting the puppy in with a nearby nursing dog, the site manager said of dogs in the room, “Honest to God, those fuckers are so close[ly] related … we’re probably not that far off.” 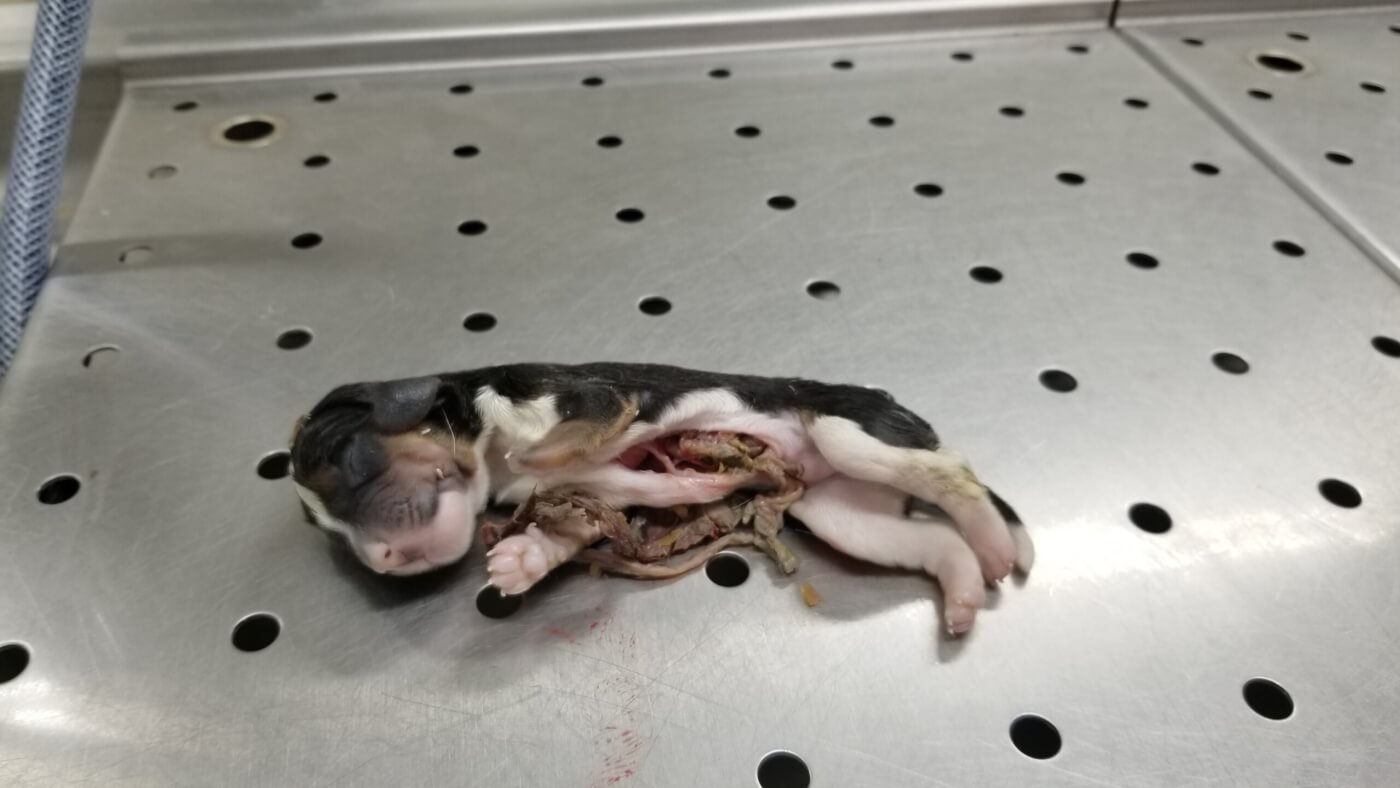 The next morning, PETA’s investigator found the puppy dead.

Workers put some puppies down by trying to inject euthanasia solution into their hearts while they were conscious and able to feel the needle penetrating their chest, contrary to veterinary guidelines for euthanasia.

After a worker denied that he needed to sedate one conscious puppy before putting her down, the puppy raised her head.
When PETA’s investigator pointed out that “she’s still … awake,” the worker did not respond.
He just put the needle into the animal’s chest and injected the solution.

A supervisor was aware of this practice and knew that at least one worker engaged in it. Some workers did little—or nothing at all—to verify that animals were dead before putting them into plastic bags.

Soaking Animals and Food With High-Pressure Water
Nursing mothers and their puppies were left in cages while a supervisor and others sprayed the cages with a high-pressure hose. The dogs were left soaking wet. 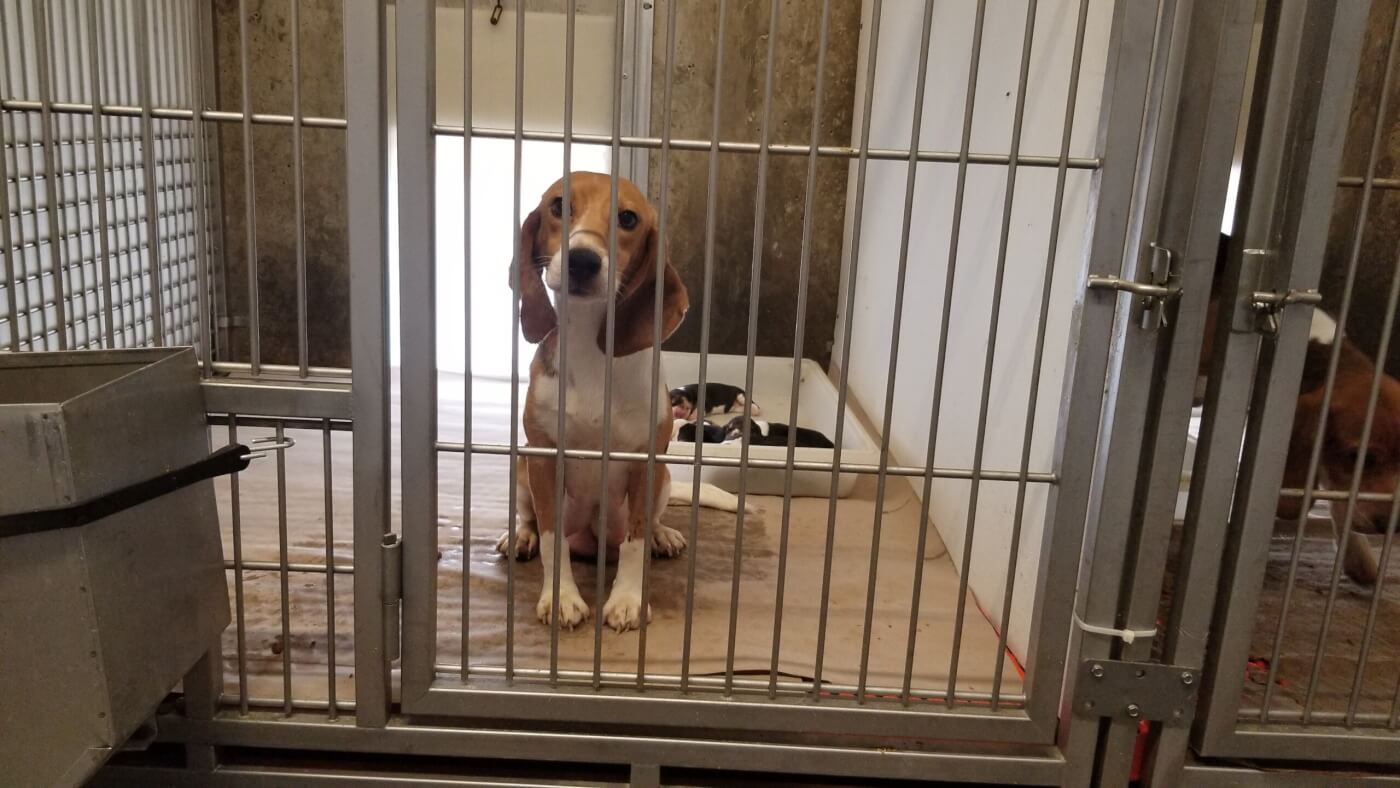 In addition, the facility caged cats in desolate rooms, where they were desperate for attention.

When dogs were sick or injured, lay workers tried to diagnose and treat them.

A supervisor inserted a needle into a puppy’s head, without anesthetics or analgesics, in a crude attempt to drain fluid from a wound.
The puppy cried out, loudly—so the supervisor tried to hold his mouth shut. 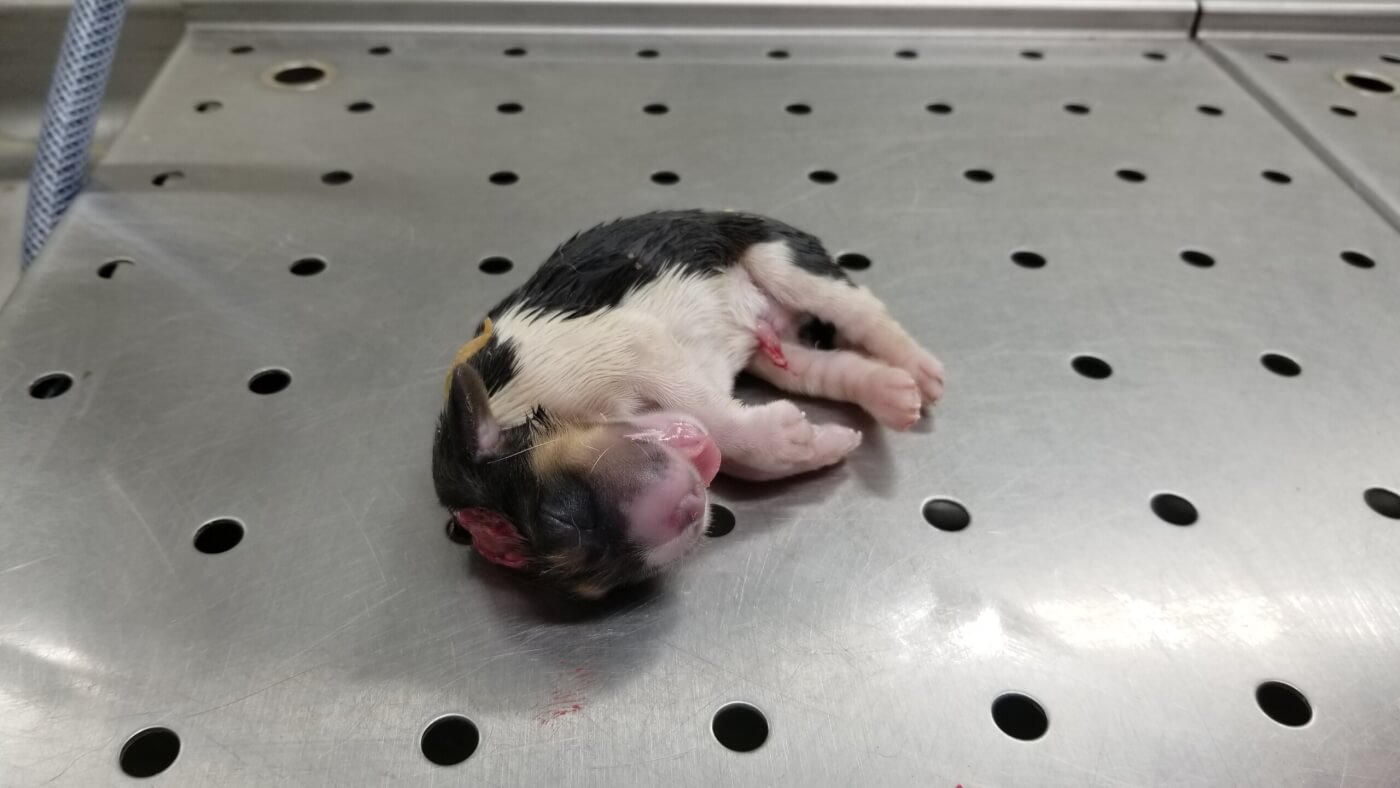 Workers who were not veterinarians—or even veterinary technicians—cut prolapsed tissue off puppies’ eyes, stitched dogs’ prolapsed penises, and even cut puppies out of sedated dogs’ abdomens before putting the mothers down.

They were expected to perform “necropsies” by cutting open puppies’ remains in an attempt to determine their cause of death.

Standard Operating Procedures and the Suffering They Caused

Workers were also tasked with pressing needled clamps into puppies’ ears—as their mothers looked on—and then rub paint into the resulting holes to tattoo them.
Dozens of puppies were tattooed three times—first with the wrong information, the second time with “X”s over the mistakes, and then again with the intended tattoo.

Refusing to Follow the Feds’ Directives and Conspiring to Conceal It

For their final 48 hours with the puppies, workers intentionally deprived nursing mothers of food.
According to a supervisor, USDA inspectors told management in July to feed the dogs through their last nursing day, but the supervisor refused and continued to deny the mother dogs even half a cup of kibble. 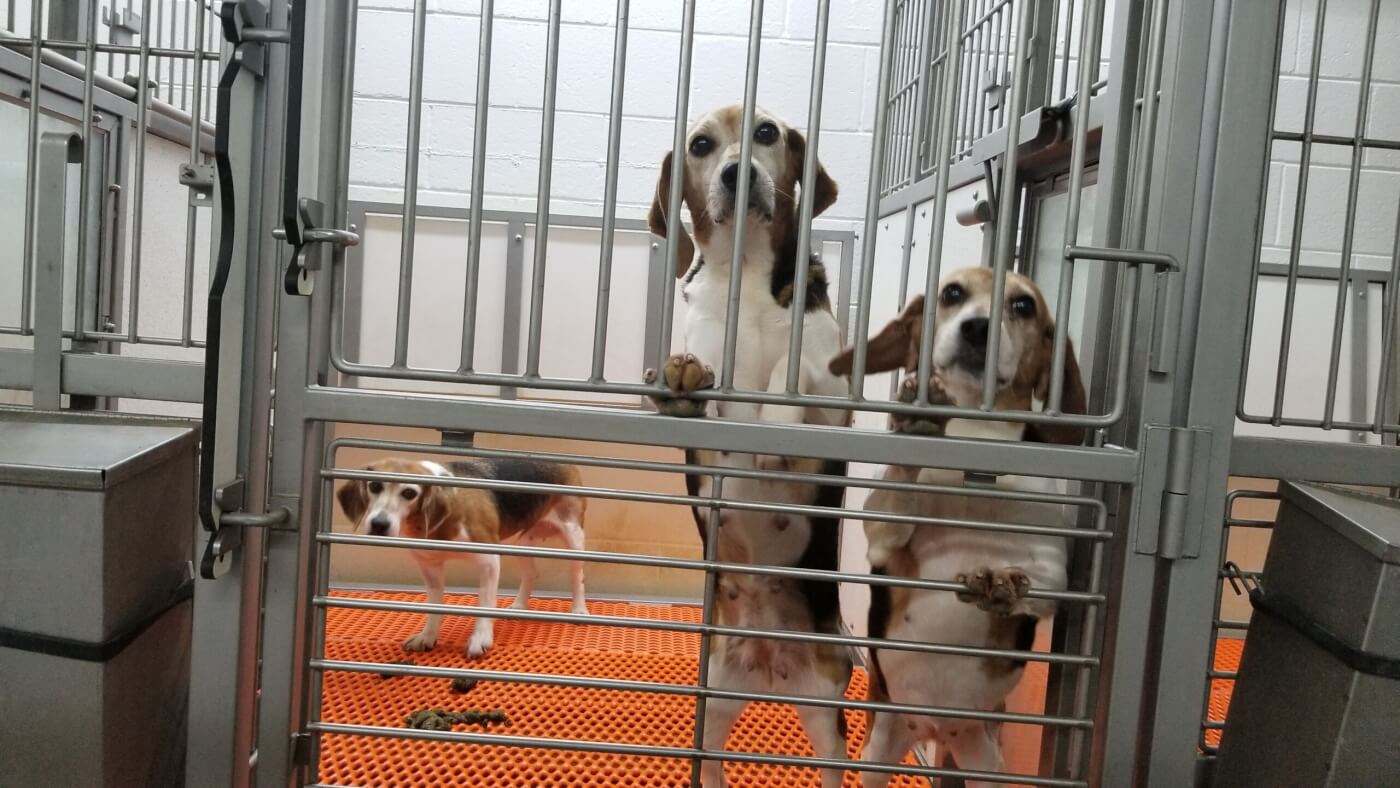 After telling PETA’s investigator and another worker that nursing dogs “did not get fed,” the supervisor cautioned, “[I]f too many people know it, it’s gonna get out that’s what we’re doing, and then it’s gonna get bad.”

Later, the supervisor encouraged workers to say that they were feeding nursing mothers—if they were asked about it—even though they had been instructed not to.

You Can Help!
Experiments on these beagles and other animals are cruel and unethical, but did you know that a staggering 90% of basic research, most of which involves animals, fails to lead to treatments for humans?

Yet the biggest funder of research in the U.S., the National Institutes of Health (NIH), spends nearly half its annual budget on animal studies.
That’s $19.6 billion down the drain every year.

We need a better way—and PETA scientists have come up with it. The Research Modernization Deal outlines a roadmap and strategy for optimizing our nation’s investment in research to cure disease—by ending funding for experiments on animals and investing in research that’s relevant to humans.

And I mean….When it comes to practicing the worst torture on living beings, the gang of animal experimenters comes first.

Where do these mentally deranged people actually get the right to use taxpayers’ money to practice torture on animals according to the Nazi pattern?

They have no right to do so, but they get the opportunity to act out their sadistic instincts through systems and authorities that cooperate with them and cover or tolerate their crimes.

The ridiculously low penalties (or none at all) for even the most devious animal cruelty create feelings of powerlessness – and not just that…
They generate the conviction that pacifism is the wrong strategy against professional sadists, professional torturers, and professional cruelers.

Life imprisonment or long sentences for these scum (as would be the case in a civilized society) would certainly weaken that belief.

But the question of legality, whether experimenters can cut animals alive, torture them, let them die helplessly at will, is not posed by systems that are insatiable in their power.
These systems do everything – lying, cheating, stealing, torturing, murdering – to increase their power.

And they will not stop as long as criminals remain under a secret, anonymous and protected identity.
Names, addresses and photos of the involved animal abusers must be made public.

Our mistake is that we let them sleep peacefully

One thought on “U.S: Shot down the breeding hell of dogs for experimentation”