“Why are so many people so cruel to their dogs?”

That is the question The Post’s Gene Weingartenset out to answer when he spent three days in the field with workers from PETA who investigate complaints of cruelty.

The closest he came to any kind of answer — after witnessing one instance after another after another of dogs chained or caged in truly horrific conditions — is because they can.
Hopefully, though, his searing exposé will wake up local and state officials to the need to ban the unattended tethering of dogs.

Dogs are naturally social beings.
They need interaction with humans and/or other animals, but it sadly is commonplace for owners to leave their dogs outside in all weather extremes, attached to some stationary structure or imprisoned in a pen.

“It occurs all over the country,” Mr. Weingarten wrote, “the pitiless 24-hour-a-day chaining of dogs to lifelong sentences of misery and madness.”

In addition to the psychological effects — otherwise friendly dogs becoming neurotic, unhappy, often aggressive — there are the physical ailments that result from being continuously chained.
Necks become sore and raw; collars can grow into their skin, and they are vulnerable to parasites and insects.

Often they are denied food and water. Four of the dogs rescued by PETA during the three days of Mr. Weingarten’s reporting were so damaged they had to be euthanized.

“I have been doing this for 25 years, and I still don’t understand it,” Daphna Nachminovitch, PETA’s senior vice president of cruelty investigations, told us about what she sees as the disconnect between someone deciding to own a dog and then utterly failing to understand its most basic needs.

While she acknowledged that “you can’t force people to love and respect and show kindness to animals,” Ms. Nachminovitch stressed that it is possible to impose and enforce some basic rules of decency and humanity.
PETA has led the effort to try to persuade state and localities to ban the brutal practice of leaving dogs unattended for hours on end tethered to a chain or trapped in a pen. 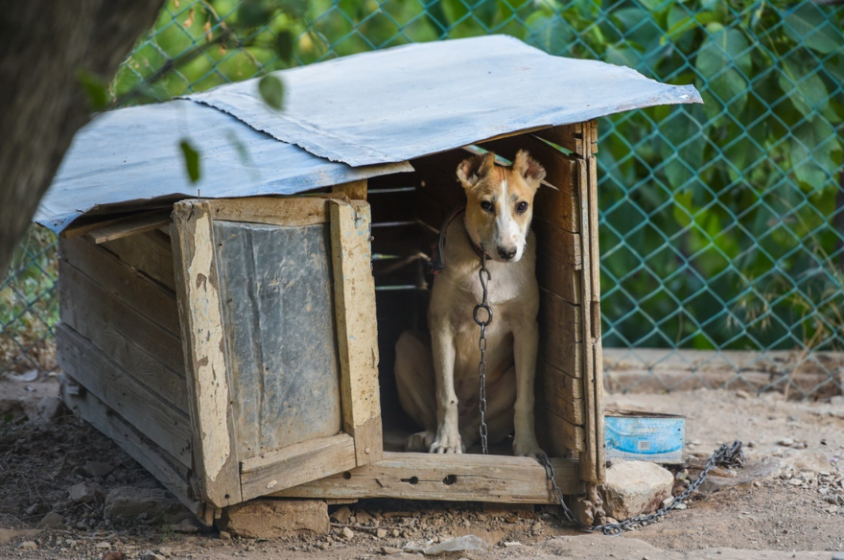 Twenty-two states and D.C. have laws that attempt to limit the number of hours or specifying what kind of collar or length of chain is allowed.
But those efforts have come up short.
None have banned unattended tethering entirely.
There has been some success at imposing prohibitions at the local level but, as Mr. Weingarten reported, they represent less than 1 percent of all cities, towns and counties in the country.

As Mr. Weingarten wrote, “There is a terrible power that comes with being human. But there is a potentially beautiful power in that, too. In this brutally unequal world, isn’t that part of the covenant with our pets?
Don’t we owe them that much dignity?”
Animals are helpless, but when it comes to making their lives more bearable, people are not.

And I mean…“There is a terrible power that comes with being human. But there is also a potentially beautiful power in this … “

“The all-important question is: Has there ever been something like an education for peace, a training for peacefulness, an introduction to being good?
Has a moral sensorium ever been developed here that one can address, that one can appeal to?
Is it possible to educate people about morality, to be good or at least to want to be good at all?

At least there is a glimmer of hope – albeit a paradox: it can be influenced, the motivation for morality, an education for discord is undoubtedly possible.
But if a negative moral shaping of the human being is possible, then positive attempts at influencing could also have a chance of success.

Personally, however, I have little hope that the described process of training to torture and killing could also lead to significant successes in the opposite direction.
I think the development towards inhuman and immorality is much easier than the other way round.

Mainly because even the very best animal protection law does not grant animals any rights, but only restricts the power of disposition of humans. Humans have rights, animals suffer under the violence of those who have rights to it.

Therefore: without the recognition of animals as subjects of rights that has to exist without being asked for, fascism against ALL animals will never end.

One thought on ““Why are so many people so cruel to their dogs?””