In never-before-seen footage, a PETA Asia investigation into an Indonesian slaughterhouse that supplies Gucci with lizard skins reveals how Gucci wallets, belts, and purses are made.
The lizards’ legs are tied, then they’re callously thrown around and beheaded without stunning—causing them a prolonged, agonizing death.
This kind of cruelty goes into every one of Gucci’s lizard leather purses, belts, wallets, and other fashion accessories.

Workers put the lizards on a wooden block one by one and chopped off their heads.
PETA Asia’s investigators documented workers striking lizards up to 14 times with a machete until the decapitation was complete.
Lizards struggled and thrashed throughout the process.

According to Dr. Clifford Warwick, a reptile expert who reviewed PETA Asia’s footage, decapitating live, conscious reptiles has been recognized as extremely inhumane by major scientific bodies for approximately four decades and is illegal in some parts of the world.

Decapitation does not cause an instantaneous death in lizards. According to Dr. Warwick, the lizards’ brains were probably conscious—fully aware and feeling intense physical pain and psychological stress—for over 30 minutes after they had been beheaded.

Workers then inflated the lizards’ headless bodies with an air compressor to make their skin easier to remove.

Despite hearing from PETA, Gucci continues to profit from this kind of cruelty.

Lizards have individual personalities, just like cats and dogs. Research has shown that some species of lizards are devoted parents and mates, and three generations of lizards may live together in family groups.
Rather than exploring lush rainforests, the lizards used by Gucci are taken out of their natural habitat, abused, and violently killed for cold-blooded vanity.

No matter what standards companies tout, PETA entities have repeatedly exposed the horrendous ways in which animals are abused by the exotic skins trade.

A previous PETA Asia investigation documented that snakes in Vietnam are killed by being inflated with compressed air and that crocodiles are electroshocked, stabbed, inflated, and then likely skinned alive.

In South Africa, PETA U.S. investigators caught workers on camera striking ostriches in the face during transport, and at the slaughterhouse, they were stunned and flipped upside down, and then their throats were slit in full view of the other terrified birds—all for the bumpy-textured ostrich-skin purses sold by Gucci.

No bag, belt, or wallet is worth so much pain and suffering.

Gucci banned fur and angora after hearing from PETA and our supporters. It’s time for the company to do the same with exotic skins.

And I mean…Luxury items make money.

The trade in Asian pythons alone is an estimated 1 billion US dollars annually.

Because the leather of the phyton snake is particularly popular.

To do this, the living phyton snakes are hung with their jaws on a hook and pumped full of water so that the body is full and the snakeskin can be peeled off with a straight cut. 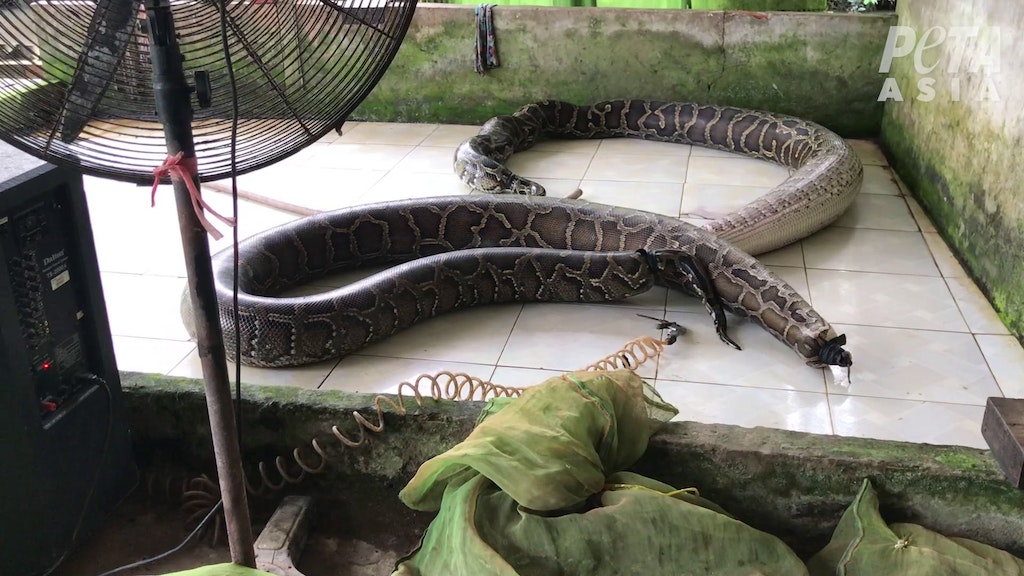 A living python with a compressor hose: anus and mouth are sealed with tape Photo: dpa / Peta

After that, the skinned phythons, which are disposed of as waste, often live for several days before they die in agony.

Most of the leather used is imported from “low-wage countries” such as China, Brazil, India, Bangladesh and Vietnam.

In the countries of origin, leather can now often be sold more expensive than meat, which is why leather is no longer a waste product of the meat industry, as is widely believed, but the opposite is often the case.

The leather of exotic reptiles is back in vogue: The reptile leather is mainly imported from luxury fashion brands such as Gucci, Cartier, Hermès and Bally and processed by them into watch straps, shoes and bags.

Switzerland is the world’s largest dealer of goods made from the leather of exotic animals.

The industry and the exclusive clientele do not seem to care what agony the animals have to suffer from in order to end up as an accessory.

There is no species-appropriate way to kill an animal. Millions of animals die each year for trade in exotic skin, and every single animal goes through the same excruciating killing process.

We don’t need wildlife products for luxury fashion. This damages the ecosystem and causes incredible torture for the animals

WAV Comment – Talking of old fossils – there I was thinking the Conservative Party had only been around since 1834.  Just shows you; you live and learn. Joking aside; an amazing discovery to learn more about the past.

Five ice-age mammoths in an extraordinary state of preservation have been discovered in the Cotswolds, to the astonishment of archaeologists and palaeontologists.

The extensive remains of two adults, two juveniles and an infant that roamed 200,000 years ago have been unearthed near Swindon, along with tools used by Neanderthals, who are likely to have hunted these 10-tonne beasts. More are expected to be found because only a fraction of the vast site, a gravel quarry, has been excavated.

Judging by the quality of the finds, the site is a goldmine. They range from other ice-age giants, such as elks – twice the size of their descendants today, with antlers 10ft across – to tiny creatures, notably dung beetles, which co-evolved with megafauna, using their droppings for food and shelter, and freshwater snails, just like those found today. Even seeds, pollen and plant fossils, including extinct varieties, have been preserved at this site.

All these will now offer new clues into how our Neanderthal ancestors lived in the harsh conditions of ice-age Britain, a period of prehistory about which little is known. The exceptional discoveries will be explored in a BBC One documentary, Attenborough and the Mammoth Graveyard, to be aired on 30 December, in which Sir David Attenborough and evolutionary biologist Professor Ben Garrod join archaeologists from DigVentures to film the excavation.

Garrod told the Observer: “This is one of the most important discoveries in British palaeontology.” While the odd mammoth bone often turns up, he said, finding such complete skeletons is “incredibly rare”. “Where these mammoths lie in the ground is exactly where they died a quarter of a million years ago – next to incredible things like stone tools and the snails they trampled underfoot.

“We have evidence of what the landscape was like. We know what plants were growing there. The little things are really revealing the context of these big, iconic giants. It’s a glimpse back in time. That’s incredibly important in terms of us understanding how climate change especially impacts environments, ecosystems and species.”

Lisa Westcott Wilkins of DigVentures, an archaeology social enterprise, said: “Exciting doesn’t cover it. Other mammoths have been found in the UK but not in this state of preservation. They’re in near-pristine condition. You can’t take it in.”

She added: “Archaeological sites from this period are rare, and critical for understanding Neanderthal behaviour across Britain and Europe. Why did so many mammoths die here? Could Neanderthals have killed them? What can they tell us about life in ice-age Britain? The range of evidence at this site gives us a unique chance to address these questions.”

The researchers believe that the mammoth remains and the artefacts date to around 220,000 years ago, when Britain was still occupied by Neanderthals during a warmer interglacial period known as MIS7. Falling temperatures had forced Neanderthals south, and this site was then a lush, fertile plain to which both animals and humans were drawn.

The earliest mammoths came from Africa about five million years ago. This particular species, the Steppe mammoth, was the largest of them, and lasted from about 1.8m years ago to about 200,000 years ago.

Garrod, professor of evolutionary biology at the University of East Anglia, said the species weighed up to 15 tonnes, twice or three times the weight of an African elephant: “This was the largest species of mammoth ever. By the time they were about to be gone, they had dropped down to 10 tonnes, which still sounds a lot. We think that was an adaptation to the change in environment, climate and resource availability. It was becoming colder at that time, resources were getting sparser, and it drove that shrinking of the species. On top of that, there would have been undoubtedly local pressure from hunting and competition from other species.”

Speculating on why so many animals died at this site, he added: “Was there a massive glacial flood that washed these poor animals down? By looking at the mud, it doesn’t look like there was. It’s very uniform all the way down. Were they hunted by people? Were Neanderthals crouching down in the rushes and chasing them into the water? Possibly. There is definitely an association between a wonderful hand-axe and other stone tools and these bones. Did they chance upon this bunch of dead mammoths and have a mammoth buffet?

“Or was it just really muddy? With elephants today, if a juvenile gets stuck, often the adults won’t leave the site. They’ll try and help them. This is very thick mud. I’ve grown up near the seaside, near estuaries; you don’t need to be very heavy to get stuck in mud very quickly.”

The excavations also revealed further evidence of Neanderthal activity on the site, including flint tools that would have been used for cleaning fresh hides. Some of the bones have possible butchery marks.

DigVentures is a team of archaeologists that specialises in public outreach. They were called in after a Neanderthal’s hand-axe was found with the initial discovery of mammoth remains by amateur fossil-hunters Sally and Neville Hollingworth.

DigVentures raised the funding from Historic England, dug the site and is coordinating the analysis and research. They hope to continue excavations once further funds have been raised. The site is now protected from fossil hunters by natural flooding.

Westcott Wilkins praised the Hills Group, the quarry owners, for allowing them as long as they need: “There are also early discussions about wanting to build a public outreach centre where we can display some of the finds.” Other finds are expected to go to the Bristol Museum.

She noted that the mammoths were barely five metres below ground level and close to a busy road: “People are whizzing by, not realising that feet underneath their car is this scene. It’s very surreal. We’re all still trying to get our heads around what we found.”