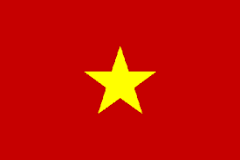 One has put him in a skirt and closed his mouth with a muzzle. His eyes are wide with fear. As a moon bear, he is one of the endangered species.

Here he is forced to drive a scooter.

The ever-present whip of his trainer is a permanent reminder of what happens when the poor bear does not cooperate.

This timid moon bear is just one of the many desperate animals that must live a life of pain, misery and fear in the shameful circuses in Vietnam 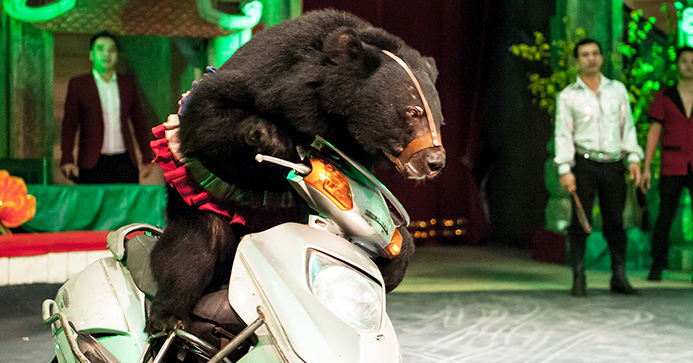 It is indisputable: In the animal circuses of Vietnam, moon bears, macaques, elephants and even orangutans suffer from daily exploitation.

For a long time they are imprisoned or chained. Through intimidation, coercion and violence they are trained.

As a result of the intense, inescapable stress many are hurt themselves.

In addition, Animals Asia has doubts as far as the papers of the endangered species are concerned (including moon bears, orangutans and elephants). Without papers, it would be very possible that they are illegally hunted and trapped animals.

Although Animals Asia has shared these shocking discoveries with the Vietnamese government, nothing has been done so far.

Bolivia, Costa Rica, Greece, Croatia and Scotland are already on the ever-growing list of countries that have completely banned cruel wildlife circuses. For Vietnam, it is time to follow their example.

Animals Asia is ready to assist in Vietnam, in the rescue of each of these circus animals. For the bears, there is room in the organization’s own award-winning rescue center and for the elephants in the partner Elephant Sanctuary.

Please appeal NOW to the Vietnamese Government for the wildlife circuses to be closed and the animals to be given a home in rescue centers.