The currently extremely hot temperatures make the already burdening animal transports for many cattle, sheep and goats a torture. Despite maladministration in transporting animals to third countries for years, especially during the hot summer months, long-distance transports to countries outside the EU are still authorized and implemented.

And that, although it has long been known, that the EU Transport Ordinance is regularly violated. In addition, as in previous years, the situation is getting worse as a result of long waiting times at the border in the heat – as is currently the case on the Turkish-Bulgarian border.

“There is an immediate need for action on the part of the German Federal Government: at these extreme temperatures and as long as it is not ensured that European animal welfare standards are met, live animal transports may no longer be handled,” claims Thomas Schröder, President of the German Animal Welfare Association. It is also high time that the EU Transport Regulation is revised, including an international limitation of animal transport to eight hours. “In the long term, it must be the goal to stop transporting live animals, but to slaughter at the nearest slaughterhouse and carry out chilled meat or semen instead of breeding animals,” said Schröder. 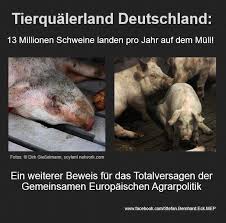 “Animal torturers land Germany: 13 million pigs end up in the garbage every year! An other evidence of the total failure of the Common EU Agricultural Policy”!

According to the Eurogroup for Animals, a truck with 57 cattle from France and the Czech Republic was currently waiting for days at the Turkish-Bulgarian border without water or food supplies at temperatures above 35 degrees. Cases like this are not an isolated case. Especially in the warm summer months it comes in the vans to temperatures above 35 degrees. These extreme climatic conditions and the situation at the Turkish-Bulgarian border with hours to days of waiting, without adequate care of the animals, leads to unnecessary suffering in the animals. Serious violations of the EU Transport Regulation have thus long been the order of the day. The laws of the Regulation are not respected until the destination, as the European Court of Justice ruled in its judgment in 2015.

In September 2017, the serious abuses at this border crossing were documented by the EU Commission, but without consequences – the situation for the animals is unchanged.