An advocate of Big Coal and chemical companies could soon be in charge of environmental protection in the United States.

Andrew Wheeler’s beliefs about climate change and the environment make him unfit to lead the EPA. 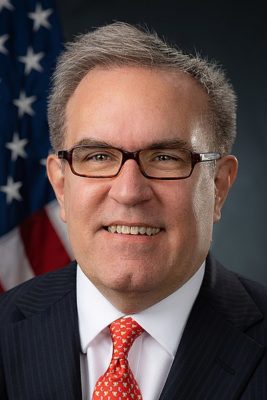 Sign this petition to ask the Senate to reject this unqualified and utterly inappropriate nominee.

Goal: Do not confirm polluter ally Andrew Wheeler as the new head of the Environmental Protection Agency.

Andrew Wheeler does not prioritize the environment. His track record as the acting head of the Environmental Protection Agency (EPA) proves this. We need the new head of the EPA to uphold the EPA’s mission statement of protecting human health and the environment. Wheeler is not the man for the job.

Andrew Wheeler became the acting EPA administrator in July 2018, when Scott Pruit resigned amid a serious scandal that he misused federal funds for personal gains. He is before Congress this week for his congressional hearing to officially lead the agency.

Wheeler has a history as a coal, chemical and uranium lobbyist. He vehemently defends the Trump administration’s rollback of environmental regulations. He does not think that climate change is a crisis caused by humans that requires a swift response. His attitude and policies do not protect human health and the environment. He is unfit to lead the EPA.

Senate Democrats spent much of their time during a confirmation hearing pointing out how far out of sync Wheeler’s track record is with the mission of the EPA. They accused Wheeler of tipping the scale in favor of the fossil fuel industry. Unfortunately, Democrats hold a minority in the Senate and will not be able to block the confirmation of Wheeler alone. They need Senate Republicans to take a stand for the environment.

Join us in demanding that the Senate Committee on Environment and Public Works remember what the EPA was designed to protect.

Do not confirm Andrew Wheeler as the new head of the EPA.

In your capacity as chairman of the committee, you hold a good deal of power and influence when it comes to confirming the next head of the EPA. Andrew Wheeler is before your committee seeking confirmation. Please do not confirm him.

The EPA was designed to protect human health and the environment. Wheeler’s track record proves that he will not uphold the mission of the EPA. He repeatedly works to deny climate change, lobby for fossil fuels, and repeal regulations that safeguard human health. Wheeler is not the person I want in charge of environmental regulations.

I am asking you to not confirm Andrew Wheeler as the next head of the EPA.

There are some Trumped up narcissists who survive only on the amount of money they have and by ensuring that everybody calls them ‘Mr President’.  These are the same folk who are supposed to run a nation and keep people in employment paid a monthly, living wage.  On the other side of the coin, there are many folk who are not financially rich; but who do hold that special trait of being ‘compassionate’ people; trying to help other living. sentient beings.  In the following videos you will witness actions from such people.  In our opinion; these folk are the real ‘heroes’ of any nation; they do not seek self glorification from the media; instead they just get on doing what they do best – in this case saving desperate animals in need of help; providing care for their survival.  We salute them; not the jumped up egomaniacs living in their ‘fake’ world that says they think everything they do is correct whilst everything others do is wrong.

Welcome here to the world of compassionate, normal; sensible people:

We were greatly assisted by Dr Jinendra Shastri, a political leader in Udaipur, who helped organise the event and ensured that the media covered activities of Animal Aid throughout the week, including a special feature about two of our most stellar volunteers, Anca Gheorghe from Austria and Ayala Melki, from Israel. We loved the publicity, the awareness raised about street animals’ problems, and the opportunity to celebrate Udaipur residents who have helped save so many lives

10 incredible rescues will make you cry tears of joy

Harrowing rescues all with happy endings, 10 unbelievable close calls will bring you from “Oh No!” to “Yesssss!” within the same breath.

When all hope is lost, with your help, we’re there.

We got a call for a dog who had been hit by a bike and was unable to walk. He had somehow dragged himself to the side of the road but was unable to stand or to walk. He was so happy to see his rescuers that he wagged his tail despite the pain of his injuries. We brought the dear boy back to Animal Aid’s hospital and began his treatment and 6 weeks of bed rest.

Please donate today to save the lives of precious street animals like Prince.

His mother cow was frantic. She paced back and forth at the edge of an open well in heart-breaking agony because her calf had fallen in. We could barely distinguish his face looking up from the floating garbage as, exhausted and ice cold, he took his last breaths. Our rescue team arrived just in time. Watch a beautiful mother get her most desperate wish fulfilled.

Please donate for animals, and for those who love them most.

Mr Teddy Bear was starving and riddled with mange

He cowered under a porch, weakened with agony after what must have been weeks of maddening itching from mange. His scab-encrusted body was also attacked by maggots that had entered the skin which he had scratched open in desperate confusion. Too ravaged by the mange parasites to eat, this precious dog was in the final stages of his life. But watch what happened next.

Even extremely ill animals can be saved. But they need your help. Please donate.

7 years ago Udaipur animals got a new guardian angel with rescue team leader Bhagat Singh. As a our ambulance driver, Bhagat has led his team in literally thousands of life-saving missions, guiding rescuers down winding lanes, calamitous construction sites, busy freeways and into the back rooms of private houses–wherever animals hide in pain, or are stopped in their tracks by urgent health problems. Bhagat cheerfully tackles near-impossible distances and every hour makes critical judgments about which animals need to be treated as the highest rescue priorities. Bhagat Singh has set the highest standard for life-saving rescues.

The real Heroes –  every one of them ! – please try and donate today, Thank You – WAV.

Man has no or at most only a few unique abilities.
There are many living beings who can learn a language, enter into complex social relationships, renounce their own wishes for the good of the community, use tools, imagine things and dream. There are many creatures that can remember certain information, play with their friends, enjoy intimacy, talk and grieve for their dead.
Some creatures have abilities that far surpass our own – be it in terms of navigation or stamina, communication or the early detection of natural events.

We still do not know exactly how all living things think or what they think. But dismissing their world of thought as less developed, less rational, less ethical, or less intelligent than ours is clearly a mistake.

No living thing deserves to be mistreated

No matter what skills it has. We all know that tormenting children or disabled people is just wrong because they do not have the same skills as adults.
In the same way, all living beings on this earth have a right to freedom and respect – not because they have abilities that we admire, but simply because they are living beings.
We all have the same evolutionary roots, we all live on the same earth, and we are all subject to the same laws of nature.