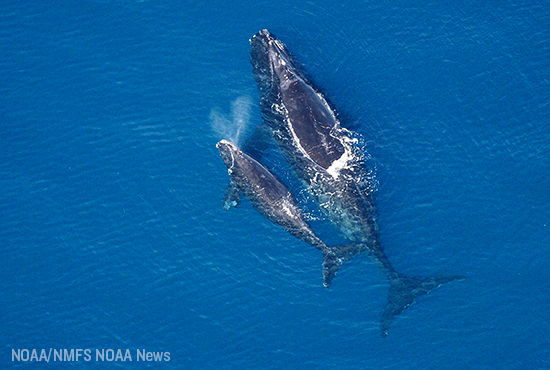 Support the NRDC with their campaign to:

Meanwhile, Congress is considering bad legislation that would slash critical protections for ocean wildlife. While NRDC continues to fight the administration in court, you can help protect whales, dolphins, and other marine mammals by keeping the pressure on Congress to stand strong against Trump’s giveaway to Big Oil.

The Trump administration just gave fossil fuel companies the green light to explore for oil and gas off our Atlantic coast using deafening seismic airguns — which will cause senseless harm to thousands of whales, dolphins, and other marine mammals, including endangered species like the North Atlantic right whale.

At the same time, Congress is considering bad legislation that would slash critical protections for majestic ocean wildlife when we need them more than ever. But, there’s also major bipartisan support for strong legislation that would help keep the Atlantic coast off-limits to destructive seismic exploration.

Tell your senators and representative to stand strong against Trump’s giveaway to Big Oil by opposing any attempts to expand seismic oil and gas exploration in the Atlantic — and push for strong legislation to protect our cherished coastline and save whales!

Professor Tasuku Honjo has been awarded the 2018 Nobel Prize in Physiology or Medicine for his discovery of the programmed cell death protein 1 (PD-1), a key player in tumor immunology. He shares the award with Professor James P. Allison, who pioneered research on the immune checkpoint protein CTLA-4, another major pathway allowing cancer cells to evade the immune system.

Prof. James P. Allison (left) and Dr. Tasuku Honjo (right) were awarded the Nobel Prize for Medicine in Stockholm on 10 December. For their experiments, they have bred mice with tumors. Only in the breeding of such a so-called model, there should be up to fifty committee animals. So animals that do not even survive the cruel breed. For the livestock then begins a life of agony. Locked up in a laboratory, the researchers make cruel experiments with them. Some die immediately, others have a painful life.

Tormented dogs, rabbits, hamsters, chimpanzees, sheep, cows, chickens, pigs and frogs form the basis of the work of the Nobel Prize in Medicine since 1901. It is no wonder that animal rights are trampled here. Alfred Nobel, the founder of the Nobel Foundation, was an explosives and arms dealer and was not even interested in human rights. Over three million land mines delivered his weapons factory in the world. How many children have lost body parts throughhis mines or have even died, can not count.

To be against animal experiments shows superior intelligence to the scientists performing these experiments.
Penicillin has saved more lives than any other drug. If it were discovered today, it would be different. Because it would not have passed the animal experiment, and thus would never be allowed for humans. The same applies to aspirin and insulin.

Animal experiments are not only cruel, they even hinder science.

Why are they being carried out?

And how are the experiments paid?
With taxpayers’ money for which citizens, animal lovers or not, have worked hard.

97% of all drugs tested in animal experiments are never approved!
Already in the breeding of animals for animal experiments, many animals are tortured and killed: On a useful “model” come about 50 animals to be disposed of.
More than 60 percent of all diseases are not curable, although researchers experiment with animals for decades.

They already exist, the animal-free, forward-looking research. For example, in-vitro testing and organ microchips are the most ground-breaking revolution of the future, and are already on the rise in the US and Asia.

The Netherlands, which want to be free of animal experiments by 2025, show that there is another way.

My comment: I quote from http://www.asianscientist.com/: “Together, Honjo and Allison showed how different strategies can be used to inhibit the braking of the immune system in the treatment of cancer. The groundbreaking discoveries of the two winners are a milestone in the fight against cancer”!

Quote from an article in “Times” by dr. Richard Klausner -Director of the American National Cancer Institute: “The history of cancer research is the story of how to cure cancer in mice. For decades, we cure cancer in mice, but in humans it does not work! “

It was a race against time and the elements to rescue a dog trapped on a frozen lake, but one brave officer was willing to tough it out to save the animal. It happened in the Van province of Turkey.

A police diver swam out to the dog and then had to use his arm to break through the ice. The dog was suffering from hypothermia and needed medical attention right away.

Give that man a medal !

And Trump gripes about China ???

Florida authorities have arrested nine people accused of running a sickening operation that had black bears chased, tortured and killed by packs of hunting dogs throughout various counties in the state.

Footage shared on social media reveals the depth of torture experienced by the bears, with one heartbreaking video showing a terrified, exhausted black bear attempting to escape up a tree before falling to the ground and being mauled to death by at least a dozen frenzied dogs.

Bears as young as one week old were savaged in these brutal attacks, the majestic animals so overwhelmed by the sheer number of dogs they were unable to fight back.

Florida Attorney General Pam Bondi says their investigation found that two bears died as a direct result of the baiting and hunting, but authorities suspect many more were killed over the last year.

The nearly year-long investigation discovered the group using buckets of peanut butter, dog food, and stolen donuts to bait the bears before ordering the dogs to attack the helpless animals. Many of the incidents were filmed and used as “advertising” to sell hunting dogs. Florida county authorities have confiscated 53 dogs used in the operation.

It is illegal to hunt bears in Florida, and the perpetrators have been charged with felonies and misdemeanors including animal cruelty, illegally baiting and taking black bears, and RICO violations. Each person accused may face at least 30 years in prison.

Florida Attorney General Pam Bondi and local authorities should be commended for taking this case seriously so far and working to shut down the operation. Sign this petition encouraging her to see this case through to justice, and push for a lifelong ban on the hunting or keeping of any animal for all found guilty.

Hundreds of kittens are forced to eat infected, raw meat as part of an experiment by the US Department of Agriculture (USDA). These kittens are then euthanized at the end of this experiment. Demand an end to this wasteful and cruel experiment that uses taxpayer money.

A laboratory in Beltsville, Maryland breeds up to a hundred kittens per year, feeds the kittens parasite-infected raw meat, collects their feces for 3 weeks to track physical reactions to the parasites, and then euthanizes the kittens. This is a taxpayer funded experiment that has been ongoing for nearly fifty years. This experiment costs taxpayers $650,000 each year and is being conducted by the USDA — the very organization charged with enforcing animal welfare laws.

The most heart-breaking part of this may be that even the kittens which survive the experiment, and are perfectly healthy, are euthanized instead of sent to a rescue organization to be adopted by a loving family. This is a waste of life and an atrocious use of tax money. Sign this petition to tell Secretary Perdue that we are not okay with how our tax money is being used. Demand an end to taxpayer funded animal experiments that kill defenseless kittens.

The USDA, which is in charge of setting and enforcing animal welfare laws, uses taxpayer money to fund atrocious animal experiments. Your lab in Maryland breeds kittens, feeds them infected food, monitors their reactions to the parasites, and then euthanizes them – even the healthy survivors are killed.

This is a despicable waste of life in a time when there are alternatives to animal experiments. At the very least, the healthy kittens should be sent to a rescue organization for adoption by loving families.

Our tax dollars do not support animal abuse. We demand an end to this taxpayer funded animal experiment that murders kittens.

It is the  dwarf flying squirrel