Rabbits, dogs and monkeys with masks holding a smoking cigarette – many still remember the terrible images of the 60s and 70s. It is hard to believe that such animal experiments – today mainly on rats and mice – are still common.

Although population studies on the health hazards of smoking could fill entire libraries, and although modern research methods exist today. And although animal testing for the development of tobacco products in the Animal Protection Act are prohibited.

Although nicotine consumption is declining in Germany, 25% of the population still smoke in 2015. 120,000 people die each year as a result of smoking. These tobacco-related deaths are most often the result of cancer and cardiovascular disease.
90% of lung cancer cases are caused by smoking. Smoking is also the most important cause for the development of chronic obstructive pulmonary disease. The German Cancer Research Institute estimates the direct and indirect costs of smoking at around € 79 billion a year.

Smoke tests with animals in the past

By the middle of the last century, the negative effects of cigarettes were still dubious.
Because the animals that were forced to smoke, got no cancer or cardiovascular problems. And this result gave more credibility than the results of existing population studies.

At the turn of the millennium, the health risk of tobacco consumption was well known.  But even with the knowledge, animal experiments continued in the 1990s and 2000s. The focus of the former attempts was u.a. on the consequences of passive smoking and the development of lung cancer.

The tobacco giant Philip Morris forced in his office in Cologne in the 2000s rats and mice to smoke to investigate the passive smoking or to test cigarette additives such as vanillin.

Many people are unaware that even today animals continue to suffer and die for tobacco smoke testing. And that, even though the Animal Welfare Act has forbidden since 1986 “animal experiments for the development of tobacco products … in principle”.

Smoke tests on animals in the present

Here is an example of a horror- experiment from the Institute of Anaesthesiological Pathophysiology in Ulm, 2018:
Mice are exposed to the smoke of Roth-Händle cigarettes without filters 5 days a week for 3 weeks. On the first day, the smoke from 4 cigarettes is picked up by a semi-automatic smoke generator and placed in a box. Each smoke lasts 15 minutes. On the second day the number increases to 6 cigarettes, from the 3rd day to 8 cigarettes per day.
One week after the end of the smoke examinations, it is sucked out of some mice so much blood through the vein that the extremely low blood pressure causes a bleeding shock.
After an hour, the blood is mixed with medication. Some of the mice that have already been exposed to cigarette smoke and blood loss get an explosive air wave in the chest that causes lung disintegration.
The few animals that survive these procedures are killed by bleeding. Result: Smoking has a negative effect on severe lung crushing (!!!).

Prevention is the best medicine

In addition to nicotine, cigarette smoke contains about 5,000 substances, of which more than 90 have been shown to be carcinogenic or mutagenic. With the tobacco smoke thus a variety of toxins are absorbed through the lungs and distributed throughout the body. That smoking is harmful for the consumer as well as for his fellow human beings (passive smoking), is out of the question today.

Then why not fight the evil directly at the root? Research and medicine are almost always focused on mitigation and treatment of the effects of tobacco use. It would be much more effective, however, to focus more on prevention. By eliminating cigarettes, the risk of many illnesses is reduced enormously.

Animal experiments on the development of tobacco products have long been prohibited by law. However, this does not prevent animal research from further exposing animals to cigarette smoke in order to “protect human health”. And that, although now much more meaningful methods are available. As in other biomedical areas, it will continue to adhere to medieval methods.

My comment: The Labor Mafia knows that lung cancer and heart disease have their causes predominantly due to smoking.
Although they know best that only people get cancer from smoking, not animals, they continue to torture defenseless animals for no reason.
And above all, although this test is prohibited by law.
One wonders, where do they get the right to conduct such illegal experiments?
The answer is simple: a disgusting government protects and promotes them!

Goal: Punish the man who allegedly beat an innocent puppy to death with a shovel.

A puppy was allegedly beaten to death in a shocking case of animal cruelty. The suspect reportedly used a shovel to fatally injure the helpless dog. Demand justice for this innocent animal.

The Randolph County Sheriff’s Office is investigating after they received reports of aggravated animal cruelty. Per a concerned citizen, 49-year-old Donald Duran Baker beat a puppy to death with a shovel earlier this month. The citizen witnessed the alleged beating and reported it to authorities days later. It is unclear if the puppy’s body has been discovered and Baker’s motives are unreported at this time.

Deputies arrested Baker and charged him with felony cruelty to an animal. He has been granted a $25,000 secured bond. Sign below to demand that this man receive the maximum penalty possible, if convicted.

A puppy died after the poor animal was allegedly maliciously beaten. Deputies stated that a shovel was the suspect’s weapon of choice. I demand justice for this poor pup.

The Randolph County Sheriff’s Office arrested 49-year-old Donald Duran Baker on one charge of felony cruelty to an animal after he allegedly killed a puppy. A concerned citizen contacted deputies and claimed that they witnessed Baker beat the puppy to death with a shovel. It is unclear if the dog’s body was found or what Baker’s alleged motive might have been. Baker has been granted a $25,000 bond and he will face his charge at a later date.

The person who murdered this innocent puppy is a danger to animals and they must be punished. I demand that you seek the maximum penalty in this case.

Dozens of horses on the Spanish island of Mallorca are forced to pull heavy tourist carriages through busy streets, day in and day out. 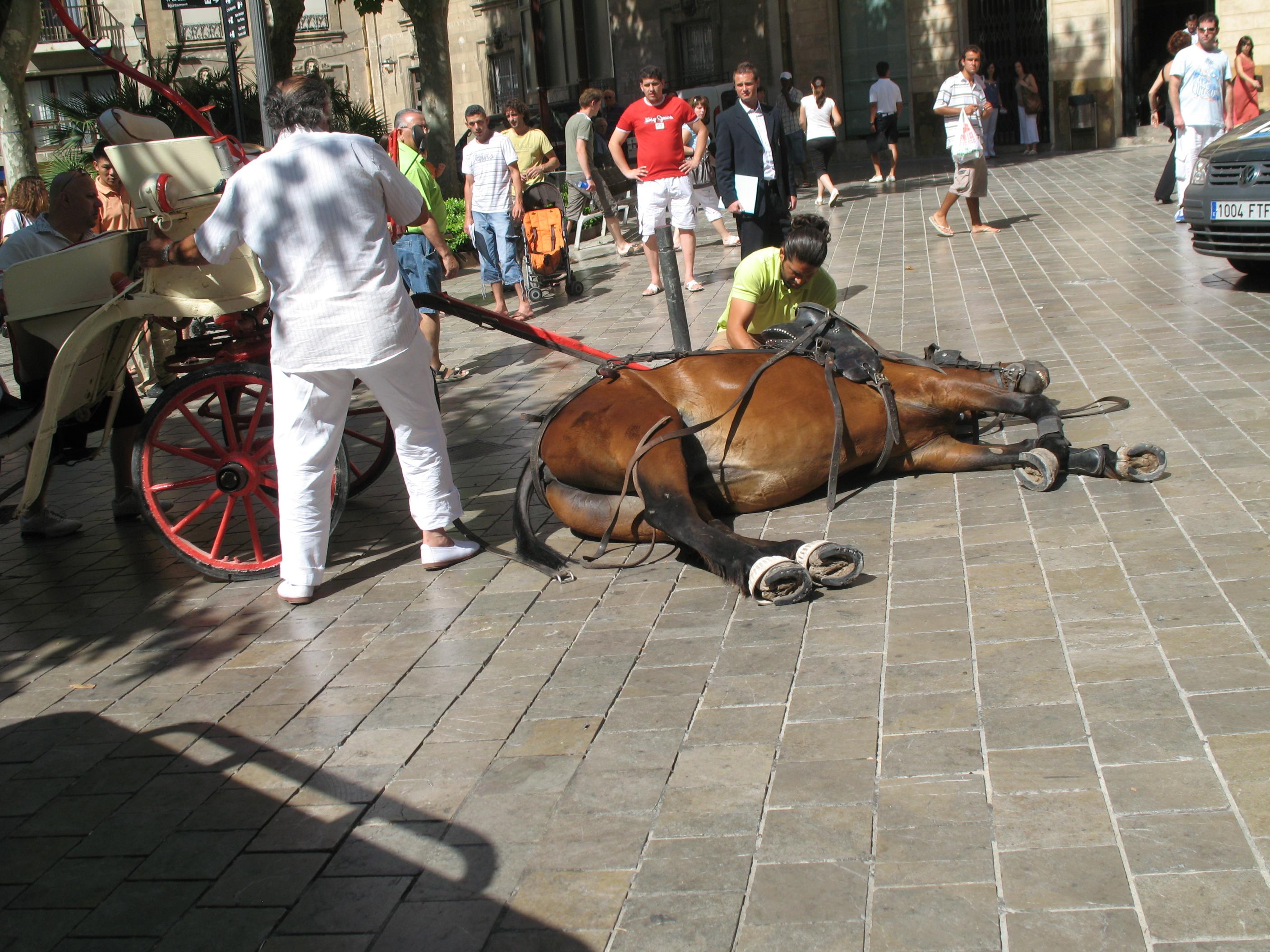 Cruel carriage rides like these have already been banned in Oxford, Barcelona, New Delhi, and Tel Aviv – and for good reason. In Mallorca, many horses collapse from exhaustion – especially in summer, when temperatures regularly reach 40 degrees.

Some horses get caught up in noisy traffic, which often leads to accidents. The honk of a car’s horn or even just an insect bite can be enough to trigger their instinct to bolt.

Several cities that prohibit horse-drawn carriage rides instead offer animal- and eco-friendly means of transport such as electric vehicles, which are a much safer way for tourists to explore local sights. There’s no reason why Mallorca can’t do the same.

Mark, horses belong on pastures where they can rest in the shade, move about freely, and interact with members of their own species.

Will you urgently send a message asking Mallorca’s mayors to ban horse-drawn carriages?

Thank you for speaking out for horses.