All animal cruelty in this world does not come because we underestimate animals, but because we overestimate ourselves.
That makes people nothing more than a habitual criminal, at every level.

At this laboratory, primates are put through conditions so disturbing, “nightmarish” doesn’t even begin to describe it.

Male monkeys are dragged out of metal cages by their necks and locked into restraint chairs. Once strapped in and unable to move, staff bring out electric shocking devices. They lower the devices to the animals’ genitals.

This sounds like the kind of thing that could not even possibly be real. But it is, and an undercover whistleblower for PETA witnessed these experiments occurring first-hand.

Where could such horrendous types of research possibly be conducted? At a renowned university funded by federal tax dollars — the University of Wisconsin at Madison (UW-Madison).
The experiments described above are only one part of the problem.

Staff is also extremely numb to the monkeys’ emotional needs, neglecting and tormenting them as a result.
The “lab rat” primates are shut away in rooms without windows or natural sunlight, inside metal cages just barely large enough to meet federal regulations. Infants have regularly torn away from their mothers. 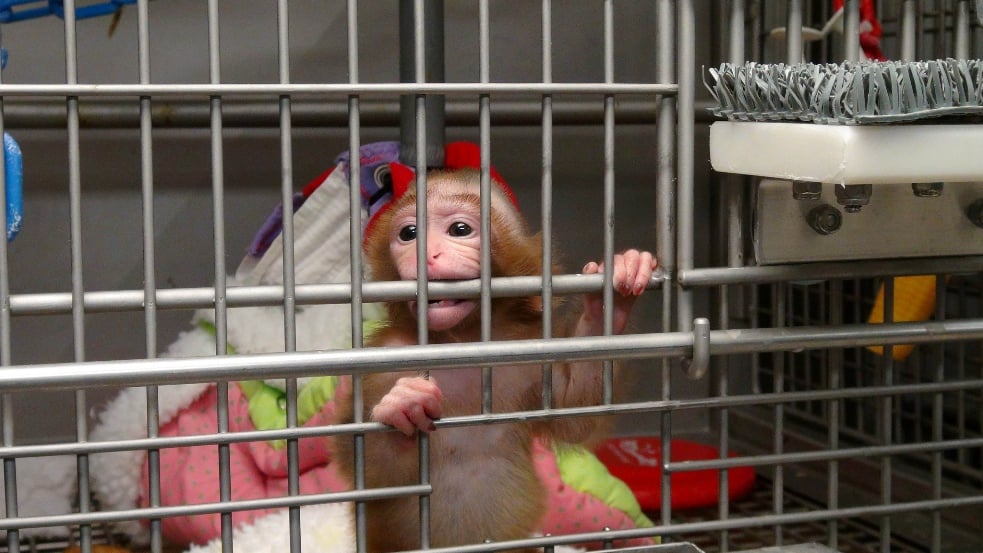 Baby monkeys torn away from their mothers are forced to live alone in small metal cages.

Some are put through surgeries performed without proper anesthesia.

In one case, a monkey — still stuck inside his metal cage and screaming to be let out — was run through equipment designed to wash cages at extremely high temperatures. The wailing animal died as a result of this torture.

In another incident, a supervisor confided that one of their staff members was a “bit too … rough” and broke another monkey’s leg.
Still more animals have lost parts of their fingers and toes from amputated injuries, often sustained while they are desperately trying to escape.

Other captive, experimented-upon primates at the lab have taken to self-mutilating.

One, called “r12050,” created an open wound on his own leg and continued scratching and digging until he’d bored a hole into his body that went all the way down to his muscle. Meanwhile, multiple other monkeys have resorted to an activity born of severe trauma called trichotillomania, in which they pull out all their hair — even to the point of becoming completely bald.

The list of abuses at this window-less, dungeon-like horror facility goes on and on and on. There are quite literally far too many accounts of trauma to address here.

No university should be affiliating itself with this level of out-and-out sadism.

There is NO EXCUSE for this kind of brutality and callous disregard for animals’ rights. Yet as of now, there are still approximately 2,000 monkeys trapped in this research facility’s premises.

Tell the leaders of the University of Wisconsin — Chancellor Rebecca Blank and Vice-Chancellor Steve Ackerman — that we will not stand this cruelty any longer!

They must close this primate lab immediately!

Sign the petition to demand that the gruesome primate lab at UW-Madison be shut down, now!

Important information on the topic: Since 1989, UW-Madison’s Richard Weindruch has starved caged monkeys—depriving them of an extreme 30 percent of needed calories—to see if this would increase their longevity.

The monkeys have been caged alone and kept perpetually hungry for nearly three decades. Members of the control group in this experiment were fed an extremely high-sugar diet and became morbidly obese.

The experimenters have repeatedly tried to make meaningful claims about the health benefits of caloric restriction, but given the fundamental flaws of this experimental design, it can’t possibly hope to inform us about anything of value.

Surrogate mothers, then and now. Left: Harry Harlow, a controversial experimental psychologist who worked at the University of Wisconsin-Madison for more than 40 years, studied the effects of isolation on baby monkeys. Right: When psychiatrist Dr. Ned Kalin’s research into the effects of early adversity on the brain begins, experimental animals will live in this incubator for the first several weeks of their lives.

In 2013 20 rhesus monkeys, as well as another 20 used as a control group, will be given tests intended to provoke and measure anxious behavior. After one year they will all be euthanized and their brain tissue collected for molecular analysis.

“We’re killing baby monkeys,” Streiffer says, Professor of Philosophy and Bioethics, at UW-Madison. “There are other things that have been done that are worse, but that’s not a justification for saying that this isn’t really really bad.”

The public has a right to insist that federal tax dollars not be wasted on unnecessary “terror testing”. Far more useful and painless methods of research are already available that do not involve animal suffering.

Why are we animals still subjecting these hellish experiments?

No one in a common sense would argue that it is okay to separate people from their families, take them overseas, and not subject them to consensual, painful procedures.

So how can we tolerate other living beings?

The answer is only one: animals cannot defend themselves. And that is also the reason why we still experiment on animals and no longer on humans, as we did a few centuries ago.

It has nothing to do with human welfare because animal experiments have no practical relevance!

““I am not interested to know whether vivisection produces results that are profitable to the human race or doesn’t… The pain which it inflicts upon unconsenting animals is the basis of my enmity toward it, and it is to me sufficient justification of the enmity without looking further.”
― Mark Twain

The 10 Best Cities to Be Vegan in Europe, According to Experts

The 10 Best Cities to Be Vegan in Europe, According to Experts (chooseveg.com)

Your dream list of future vacation destinations is ready to be finalized! Consumer spending experts at money.co.uk analyzed cities across Europe to find the best locations for vegans. Among other factors, the researchers considered the number of vegan restaurants and plant-based takeout services and the cost of cooking a vegan meal at home.

Here are their findings!

Proteins in a Vegan diet – check it out here:

At Petco stores around the country, they’re confined to tiny plastic cups with scarcely a couple of inches of water inside that are stacked on top of one another.

Scores of customers have complained of finding dead, sick, and injured bettas floating in filthy water on the chain’s store shelves.

PETA’s investigations of the pet industry have uncovered appalling neglect of betta fish even before they reach stores.

They’re often starved for several days during transport and are confined individually to tiny bags that are stuffed into boxes stacked up high in massive wholesale warehouses. Many fish die before and during transport to retailers, which can take days, as they’re shipped all over the country. Industry insiders have confirmed that this system is a common practice for some retailers.

Each captive betta fish requires a regularly cleaned aquarium with gallons of water heated to between 76 and 82 degrees Fahrenheit, a good filtration system, and enrichments such as caves, rocks, and live plants in order to thrive.

Selling them in tiny bowls or cups perpetuates the harmful myth that they’re nothing more than pretty “starter pets” who should be kept solitary. In fact, female bettas can live together, and while male bettas will fight with other males, they can be placed in a “community” aquarium containing other species of fish.

While some bettas are captured in the wild, the vast majority of those sold in the U.S. come from breeding farms in Thailand and other countries in Southeast Asia, where it’s common practice to keep them in small bottles.

When it’s time to pack them for transport, fish are haphazardly dumped into baskets covered with nets and scooped up into tiny plastic cups. Then, they’re packed up to be sent to the United States.

Segrest Farms, a Petco fish supplier, admitted that it sources bettas from Thailand.

In addition to being forced to endure cramped conditions, these fish are denied everything that’s natural and important to them, which can cause them to become depressed. According to Victoria Braithwaite, a professor at Penn State University who studies fish intelligence, depression is likely prompted by a lack of stimulation.

In study after study, fish are defying stereotypes: Some use tools, and others can recognize individual human faces.

Male bettas have devoted fathers who build bubble nests for their young with their mouths and fiercely protect their babies from predators. In his book What a Fish Knows: The Inner Lives of Our Underwater Cousins, ethologist Jonathan Balcombe notes that bettas stop killing each other and instead exhibit cooperative group behavior when they’re released from the “artificiality of captivity.”

Despite the cruelty inherent in the “pet” betta fish industry, Petco continues to sell these animals in tiny containers. No fish should be forced to live and die in a tiny bowl. Urge Petco to end the sale of betta fish immediately!

Betta Fish Are Suffering by the Millions | Take Action Today

Additional Information: Thailand is one of the world’s most important export countries for fighting fish.
In 2019, an eyewitness from PETA took a look around Thai fighting fish farms that supply the global pet trade – including the German one. What he found was shocking conditions and cruelty to animals.

Many of the animals had died in the breeding tanks and were simply not removed.
At a Petco supplier, the eyewitness came across a bucket full of dead and live fighting fish.
One employee said these animals were not profitable because their caudal fin was damaged. She admitted that they would just dump them in a nearby pond or canal.

The eyewitness looked at a total of 10 establishments

For worldwide shipping, fighting fish are packed without any food and sent on a journey of several days by air freight. A staff member told the eyewitness that sedatives would be put into the water to prevent the fish from trying to eat their own caudal fin.

According to an employee, a company that supplies Petco sends 100,000 fighting fish to the USA every week.

The company EFS – Zoo buys Betta fish from Thailand from the company Q.P.S. International Aquatics Co. Ltd., which can be seen in this video at minutes 1’41 – 1‘59.

Fish are not decorations, and they should never be forced to live and die in a tiny bowl

There is nothing more perverse than imprisoning animals in a water prison for life and claiming that someone does this out of love for animals!

Every single living being has a specific task, an individual meaning in the entire context of life.
Only the recognition of the individuality of each being can lead to a coherent ethic for our behavior with animals.
Since thinking is part of our life’s tasks, we are morally obliged not to tear other beings out of their living space and use them at will.

This moral principle cannot be discussed. It is a fact!

It may be quiet today; but 2021 will see an end to live animal exports from the UK.