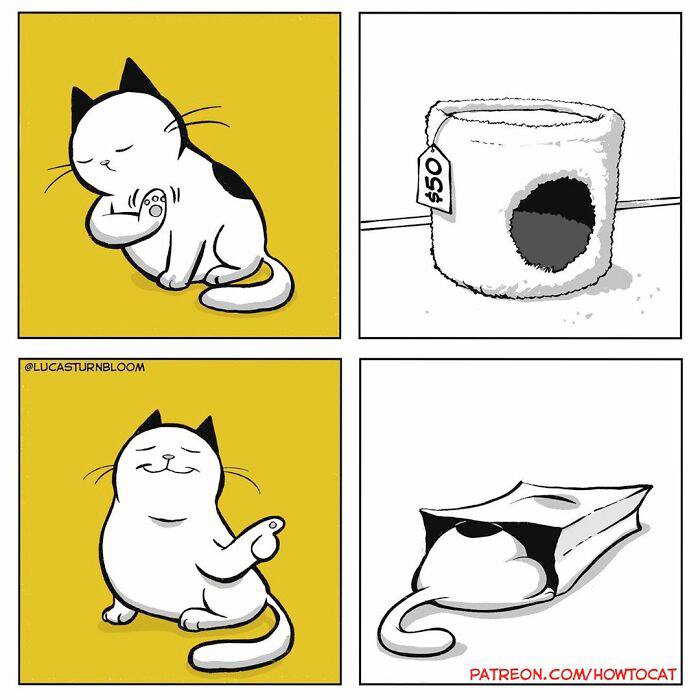 The Kochel police cleared up a series of sawn high seats in the Walchensee area. The perpetrator is a former police officer. The pensioner confesses.

A former police officer has let his hatred of hunters at “Walchensee” (Bavaria) run free
Since 2018 he has been sawing, among other things, several high seats
He was caught red-handed. 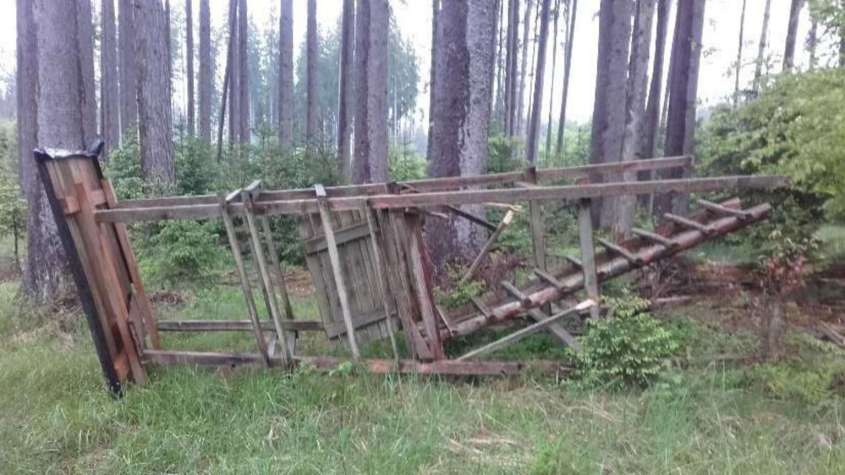 The cases go back to 2018, the Kochler police chief announced on Wednesday.

A 75-year-old man from the southern district was identified as the perpetrator.

He confesses and it is a retired police officer

The man was caught red-handed in the forest by one of the victims in August 2020.
The investigation has been ongoing since then.
The officials in Kochel also examined cases from previous years. Until 2018, property damage in the Walchensee area of ​​the perpetrator could be proven, according to the Kochler police chief.

Specifically, there are eight cases with sometimes massive damage to so-called hunting facilities such as high seats and salt licks.

“In some cases, high seats had been completely cut, sometimes only the ladders were sawed,” reports police chief. The property damage is “in the very high four-digit range” (!!!)
The local Hunting Entitled (!!!) and the Bavarian State Forests are affected. Fortunately, no one was harmed in the acts.
It is possible that some high seats were even “climbed in ignorance of the danger”.

The perpetrator confessed to the damage to property.
“As a motive, he named personal problems with hunting wild animals.”

The 75-year-old confessed to some of the cases, while others could be detected by wildlife cameras or the location of the tracks.

“For example, we found traces of paint rubbed off on saws on the suspect.”
The Kochel police have worked through all the cases from previous years in this matter.
The perpetrator has so far not appeared as a criminal offense.

All reports will now be sent to the public prosecutor.

The perpetrator must expect a fine or even a low-threshold prison sentence.

And I mean…First of all, respect and solidarity belong to the man.
In addition, for one more reason: despite his old age, he continued to try to eliminate the execution places in the forest.

Some things should be clarified here about the status of these murder seats.
Not all are legal, but who dares to ask?
And each scrap of them costs a maximum of 200 euros, most of which are built by the hunter himself.

These “salt licks” are nothing more than bait that the hunters put in front of the high seats so that the future victims get used to them and visit the site regularly.
This is the only way the hunter can create a safe execution site for the future.

Of course, the hunters claim that by fattening them up, they help the weaker ones to survive the hard winter in the forest.
But if the winters are as mild as it was in 2020, it should go without saying that no hunter feeds.
But they do it anyway.

So.. why are hunters so strongly against a possible feeding ban?
It is clear !! Because by regularly feeding the animals, any city hunter can play the nature boy in the fields and hallways and shoot a deer quickly and not sit and wait long in the high seat.

It is creepy when suddenly there is a bang in a high seat in the forest and animals that have been shot (but not dead) fight for their lives.

For someone who has experienced that, it is unforgettable 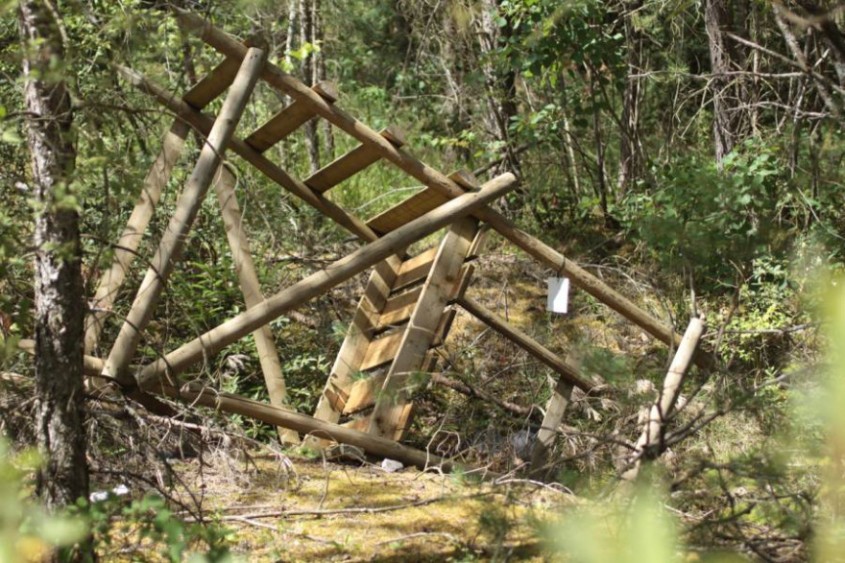 Therefore we are happy when these execution places are sawed down.
It is not forbidden.

From ‘Eurogroup for Animals’ – Brussels.

Our major wins for animals in 2020

What a special year 2020 was – not only for the world, but also for animal welfare. With the many tough events we faced this year, we want to take a moment to acknowledge and look back on the positive sides and the success stories for animals in 2020.

The European Parliament approved the setting up of a special Committee of Inquiry on animal live transportwhich is a crucial step towards making the revised Transport Regulation an effective tool to protect the welfare of animals transported within and outside the EU.

After hosting a high-level online event on labelling of animal products and the publication of our report on animal welfare and food labelling, we welcomed to see the Council setting the course for a comprehensive labelling system that displays the well-being of animals over the whole animal food production cycle in the adoption of Council Conclusions in December.

Next to our labelling report, we also published our report on broiler welfare – a groundbreaking new report presenting the first comprehensive scientific overview on the welfare of broiler chickens, showing improvements are feasible, urgent and should inform future EU legislation.

Groundbreaking news reached us in November when the European Parliament approved funding of a research project to find alternatives to high-concentration CO2 stunning or killing of pigs. Now the European Commission will invest 2 million Euro in applied research in an effort to move away from the inhumane procedure.

Lastly, we welcomed the Court of Justice of the European Union’s ruling which confirmed Member States’ right to introduce mandatory pre-slaughter stunning.

While it is often agreed that our pets are not on the front stage when it comes to EU developments and protection, 2020 has set the scene for several strategic opportunities for dogs, cats and equids.

The Croatian Presidency of the Council of the European Union and Eurogroup for Animals’ expert workshop “The Illegal Pet Trade: Game Over” took place on 21 April 2020, in the middle of the COVID-19 crisis and just a year before the EU Animal Health Law will take effect. 100 participants from European institutions, Member States, academia and the animal welfare sector debated this pressing issue. They explored the shortcomings of the control systems of the online pet trade that are currently in place and looked at best practices in how to better protect animals, consumers and ultimately taxpayers, including how these could be rolled out across Europe as a whole. All these outputs have been collected into a major publication, the “Illegal Pet Trade: Game Over report”, and was handovered soon after the release to Commissioner Kyriakides. On 27th November, Eurogroup for Animals had a pleasure to meet Claire Bury, Deputy Director General of DG SANTE, the Directorate-General for Health and Food Safety of the European Commission.

Equines were not left aside. The seventh meeting of the EU Platform on Animal Welfare in June saw the announcement that the European Commission is to mandate a new reference centre for ruminants and equines. The 8th meeting of the PAW finally acknowledged the 3 documents Eurogroup for Animals developed with its member organisations, namely the Horse Guide, Donkey Guide and Horse Factsheets.

To counter the growing national calls to reduce the level of protection of large carnivores in the EU, member organisations joined forces to showcase the opinion of million citizens to keep protecting wolves.

In the aftermath of World Kangaroo Day, Eurogroup for Animals, with the support of the Intergroup on the Welfare and Conservation of Animals, held the event ‘Animal welfare in the EU-Australia trade negotiations and the EU’s role in commercial kangaroo hunting’.

Wildlife issues have been more than ever under the spotlight this year, mainly because of the pandemic and how the way we treat animals has an impact on zoonotic diseases.In the preparation of the release of the major EU Biodiversity Strategy, Eurogroup for Animals and its members started the Stop Pandemics Start here campaign to make sure the upcoming work of the EC will address the sources of pandemics; in other words, of we treat animals. As part of this major campaign, the keeping of exotic pets is a major issue. Earlier in June, we released the Updated legislative report on Positive List and we have  launched an EP petition on exotic pet trade.

With the outbreak of the virus in several mink farms, we decided to seize the opportunity to call for an immediate closure of mink farms and sent our Joint Open letter to the EC on mink farming and COVID-19.

On 22 September, 10 years after the Directive, we joined the celebration of the First European Day for Humane Science with our members and other NGOs to call the EU to really start the work for Humane science and the phase out of animal testing.

Following calls from EU authorities for cosmetics ingredients to be tested on animals, Europe’s leading animal protection groups have sent a joint statement to MEPs urging them to uphold the groundbreaking cosmetics testing and marketing bans.

On 28 June 2019, the EU and Mercosur announced the conclusion of an unprecedented free trade agreement (FTA). As the text grants more market access for animal products without any condition related to animal welfare or sustainability, it will further fuel the intensification of animal farming, both in the EU (dairy and pig meat) and in Mercosur countries (beef, chicken). In addition, the cooperation mechanisms put in place on animal welfare and on Trade and Sustainable Development are weak. They cannot be enforced in the absence of political willingness or resources. Subsequently, Eurogroup for Animals believes the EU-Mercosur agreement is a bad deal for animals.

Eurogroup for Animals called then for a renegotiationof the EU-Mercosur agreement and was satisfied to see the issues to be pushed back for further discussions.

The Animal Friends Croatia, which has been intensively lobbying for a ban on firecrackers for years, welcomed today’s vote on the Final Bill on Amendments to the Law on Explosive Substances and the Production and Trafficking of Weapons.

At the second reading, members of parliament unanimously supported the ban on firecrackers of category F2 and F3. Unfortunately, amendments by which the use of other pyrotechnics from these categories would be allowed only between the 31st of December and the 1st of January were not accepted.

“We are happy that, after eight years of our campaign to ban all types of firecrackers, today’s vote in Parliament was a long-awaited historic moment for Croatia. We thank the Ministry of Internal Affairs and members of parliament who accepted the appeals of associations, the public, experts, and institutions to stop the terror of firecrackers,” said Luka Oman, president of AFC. He added that it was a pity that the logical proposal that the use of other noisy pyrotechnics is allowed only on New Year’s Eve and New Year was not accepted, which should certainly be corrected in the next amendments to the Act.

He explained that the current permission to use pyrotechnics on December 27th, 28th, 29th, and 30th is illogical because nothing is celebrated on those days, and pyrotechnic explosions scare people and animals and often cause hand, arm, and eye injuries: “The goal is to reduce horrific injuries of children, as well as helping people who, instead of celebrating, have to spend the holidays locked in a house every year, under sedation, with the shutters down, fearing whether their terrified pets will survive the shooting or die of heart failure. ”

He reminds us that not so long ago all pyrotechnic devices of categories F2 and F3 were banned throughout the year: “Therefore, we consider these changes as the first steps towards greater safety of citizens and animals. We need to think about the well-being of pets, domestic and wild animals, the elderly, heart and other patients, people suffering from PTSD, as well as the protection of property and the reduction of air pollution.”