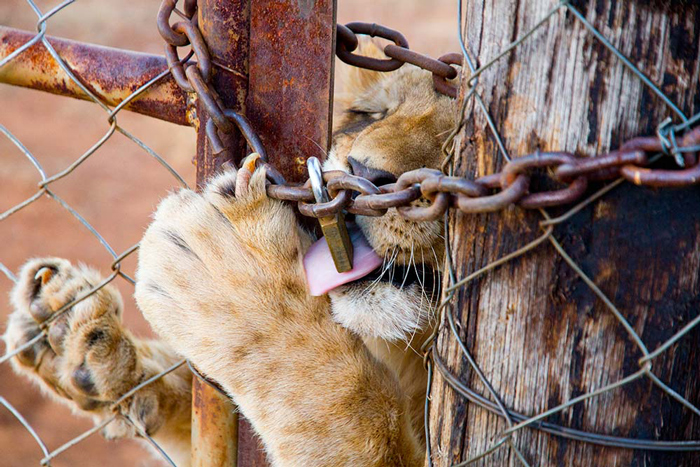 Those familiar with the scene speak of a total of 8,000-10,000 lions. There are also extremely endangered big cats from cheetahs to leopards to Bengal tigers.

The said population of 12,000 captive lions now outnumber the wild population by almost four to one. Each day, around 50 lions get killed in one particular lion farm.
They are all just for profit.

For a high fee they can be shot or slaughtered by wealthy tourists.
The victims of the hunt very often experience their end in delirium.
So that they represent the easiest possible target for the often completely inexperienced shooters, they are injected with a mix of drugs before they are shot.
With the bullet, the execution works at least reasonably quickly.

The trend is towards crossbows or bows and arrows.
This is particularly trendy in the nouveau riche circles.
There is a feeling of Robin Hood. 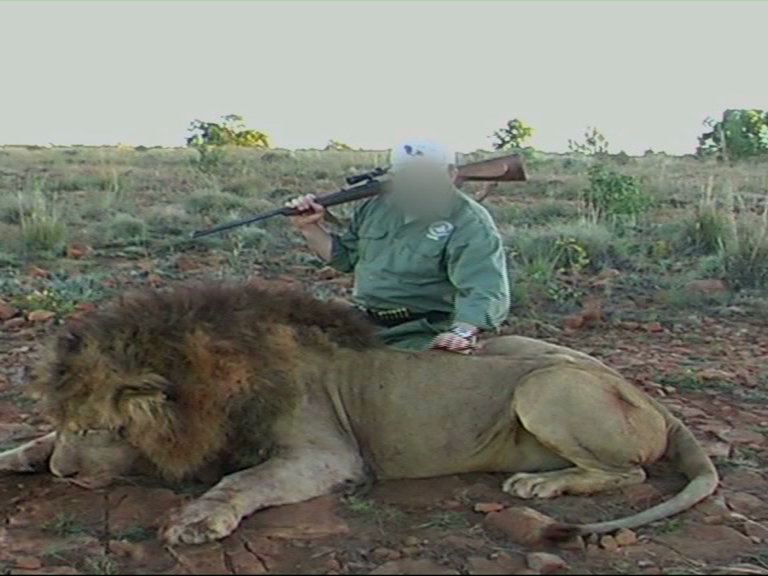 One can easily imagine the torture when the first arrow does not hit properly, when the wounded animal flees and is hunted.

Most arrows will probably not hit properly.
With a movable hit area of ​​only 10 x 10 cm, which leads to immediate death, it is definitely not the ability, but the chance that is decisive.
Martyrdom begins shortly after birth.
As in cattle breeding, the babies are taken away from the mothers as quickly as possible.
The little ones earn their first money by being petted and fed by tourists for a fee.

Like all kittens, lions and tigers also need a lot of sleep, most of which is deprived of them.
If they are a little bigger and too rude to be petted, they end up in small, filthy sheds and enclosures, where they are bored until they die.
Feed and medical care are reduced to a minimum, there is no care.
Some will say that wild lions are not cared for either. That’s right.

But…In “intensive care”, however, many more and completely different diseases develop due to the hygienic deficiencies.
There is no clean underground, the animals are constantly lying in their own dirt.

They usually find out the end through a tourist’s bullet. But more and more are “only” slaughtered because, due to the lack of tiger parts, lion parts are used for Chinese medicine.

The shooting fees for “canned hunting” lions start at around 5,000 euros, depending on their stature.
White and especially large lions are much more expensive.
For tigers, including the most endangered Bengal tigers, up to US $ 100,000 are offered.

One might think that these hunting farms would at least save the lions from extinction. Unfortunately, this is not the case.
Above all, the stately animals with the dominant genetic makeup are preferred to be shot, which worsens the gene pool.
The breeding lions do not pay attention to breeding lines or inbreeding. It’s about quantity, because more and more lions are “only” intended for the slaughterhouse.

And I mean…Canned hunting is, simply, “hunting” and killing an animal in an enclosed space.

If the area is completely fenced in so that the animal has NO WAY of escaping, then it is absolutely canned hunting.
There is absolutely no concept of fair chase like there would be if the animal was truly in the wild. It is incredibly unethical and most educated people frown upon it.
It’s a disgusting, lazy, cowardly form of trophy hunting.

The canned hunting of lions is extremely popular over in South Africa.

Unfortunately, it is legal. It was temporarily banned in 2007. However, in 2010 (after enough whining and complaining from “hunters” and breeders), a Supreme Court of Appeals ruled in favor of continuing this barbaric practice.

Game farms/ranches breed and raise lions.
Soon after the cubs are born, they are taken away from their mother to be hand-raised by humans.
They do this so that the lioness more quickly becomes ready to breed again.
She’ll have more litters of cubs here in captivity than she ever would in the wild.

To the ranch owners, more lion cubs = more money to be made from canned hunting.

At these ranches, people are allowed to come in and handle and play with the lion cubs. The people behind the ranches put on a front to the public and they claim to be conservationists and that they rescued all these cubs and that they will eventually be released back into the wild.

Of course, this is all shit because you just can’t release a captive-bred lion into the wild.

The lions become dependent on humans to feed them. Because of the constant interaction with humans, the lions grow up to not be afraid of them. This makes them easy targets to kill.

When the lions are old enough, assholes from all over pay THOUSANDS of dollars to shoot a lion in an enclosed space.
Oftentimes, the “hunters” shoot the lion from the safety of their truck. It’s also been reported that they request to shoot the animal when it is still in its cage.

Such social structures are not normal, but can be described as psychopathic. Mentally, morally, socially healthy people with upbringing and morals do not need such disgusting, barbaric activities.

And every government that goes along is either dictators or terrorists.