‘Crush’ videos are made by the most sick and depraved in the human species.  If you have not heard about them before; they nearly always involve young cats and dogs – especially kittens.  Sick women put on stiletto heeled shoes and then set out to torture the animal by digging the heel of the stiletto into various parts of the animal.  Eye sockets for example.  Or they will grind the heel into the rib cage of the animal, crushing it (hence the name) and causing it to die in huge amounts of pain by suffocation.  It is sick abuse of defenceless animals; by very sick people.

Please sign and support this petition – get everyone you can to add their name.

The photos are examples only and are not associated with the petition.

A female DJ in Thailand has been accused of live streaming herself crushing a baby kitten to death, all for the pleasure of sick animal torture fetishists in exchange for bitcoins. The disturbing videos were streamed on a ‘dark web’ site that promotes violent acts against innocent animals for sexual gratification of people who enjoy watching the gore.

A woman named Isaraporn Samutklalin accuses the DJ of murdering and disemboweling a baby male kitten she had recently adopted from Ms. Samutklalin’s sister. After Samutklalin reported the alleged kitten torturer to Phetkasem police, another woman came forward claiming the suspect also lied about “losing” a cat she had sold her.

So far, police claim they do not have enough evidence to press charges. Sign this petition to urge officials to thoroughly investigate this case — including finding out exactly what happened to these missing kittens — so that justice may be served. In addition, authorities must track down this appalling website, shut it down and prosecute those responsible.

They must make clear that torturing and killing innocent creatures for sicking “animal crush” videos will never be tolerated.

Goal: Punish the man who allegedly killed his girlfriend’s Yorkie while dog-sitting.

A dog reportedly died from blunt force trauma while in the care of a dog-sitter. The pup’s owner came home to find her poor pet unresponsive, police stated. Demand justice for this innocent animal.

Virginia Beach Animal Control officers are investigating after a Yorkie reportedly died under suspicious circumstances. The pup had been left in the care of the owner’s boyfriend, police stated, and died at some point during her time away. The owner reportedly rushed her dog to the Blue Pearl Veterinary Clinic, but their attempts at resuscitation proved unsuccessful. Necropsy reports showed that the Yorkie died from blunt force trauma to the head, suggesting physical abuse.

Officers arrested Craig Cadore on one charge of felony animal cruelty. He has been released on bond.

Sign to demand that he receives the maximum penalty possible, if convicted.

Very heart-warming news out of Vietnam as the animal welfare non-profit Animals Asia has rescued five more bears from the cruel bile industry! The rescue team arrived in a small town in Vietnam’s southern province to rescue the five moon bears from a notorious bear bile farm. These sweet bears were most likely captured from the wild and have been held captive for at least 13 years, forced to live their lives in tiny cages so that their bile could be extracted for use as a traditional medicine. This extreme captivity, devoid of any stimulation or opportunity to express natural behaviors, left the bears traumatized and their bodies broken.

Once freed from their torture cages the five bears were transported 1,700km by truck to Animals Asia’s Vietnam Bear Rescue Center, where they can begin the healing process and long road to recovery. The physical and psychological condition of these bears is very critical, as after so many years of abuse rescued bears often suffer from numerous debilitating medical ailments and disabilities. The rescue team contains experienced veterinarians and vet nurses who always hope for the best, but have to be prepared for the worst.

Animals Asia Vietnam Director Tuan Bendixsen said: “As with many rescues, we have no information about the bears at present – not even their genders. But we know they have never received any health care in the last 13 years of extreme captivity and abuse. Repeated bile extraction takes a huge toll on the bears’ health and our team will be ready for anything. Our primary goal will be to get them out of cages which were never designed to be opened, keep them alive and get them back to our sanctuary where high-quality care can begin.” You can watch the bears’ rescue video here:

Bear bile farming is a huge problem in many countries throughout Asia, and reached a peak in Vietnam in 2005 when over 4,000 bears were kept around the country on private bile farms. Animals Asia has been working for twenty years to end the bear bile industry, and in July 2017 the years of campaigning finally succeeded in the signing of a landmark agreement between the non-profit and the Vietnamese government. According to the groundbreaking agreement the government of Vietnam will close every bear bile farm and send all the bears to sanctuary by 2022. Vietnam’s Traditional Medicine Association, which is a huge part of the problem, has also vowed to stop prescribing bear bile by 2020.

This agreement was a huge step in the right direction; however, with so many bears being held captive on bile farms it is a very long process to get them all to qualified sanctuaries. The latest figures from the Vietnamese government show the number of bears in private hands has now fallen to approximately 800. The five moon bears most recently rescued were voluntarily handed over by their owner with the help of the provincial Forest Protection Department.

Animals Asia Founder and CEO, Jill Robinson MBE said: “More and more farmers are beginning to realize that bear bile farming is finished in Vietnam. Demand for bile is plummeting as people learn of the cruelty behind every vial, while the government has made it clear the end of the industry is just a matter of time. For these five bears, the end of suffering cannot come soon enough. Now we have to get them home to our sanctuary where their new lives can begin.”

To date, Animals Asia has rescued 611 bears, mainly from bile farms in Vietnam and China. Over 170 bears currently live at the organization’s Vietnam Bear Rescue Center, the largest and oldest sanctuary for bears in the country. These five bears rescued recently are certainly very lucky, as their lives are about to improve monumentally.

Caretakers plan to introduce the bears to progressively larger spaces, slowly integrating them with other bears at the sanctuary. Before too long they will be able to roam large natural enclosures, where they can express their natural instincts and behaviors. Moon bears can live up to 30 years, and with these sweet darlings in such good hands they will enjoy many happy years under the sanctuary’s loving care.

GREAT NEWS! @Coach has banned fur, saying that it’s the “right thing to do.” Today’s shoppers don’t want to wear the fur of any tormented animals, so we urge #Coach to extend the ban to angora and mohair. 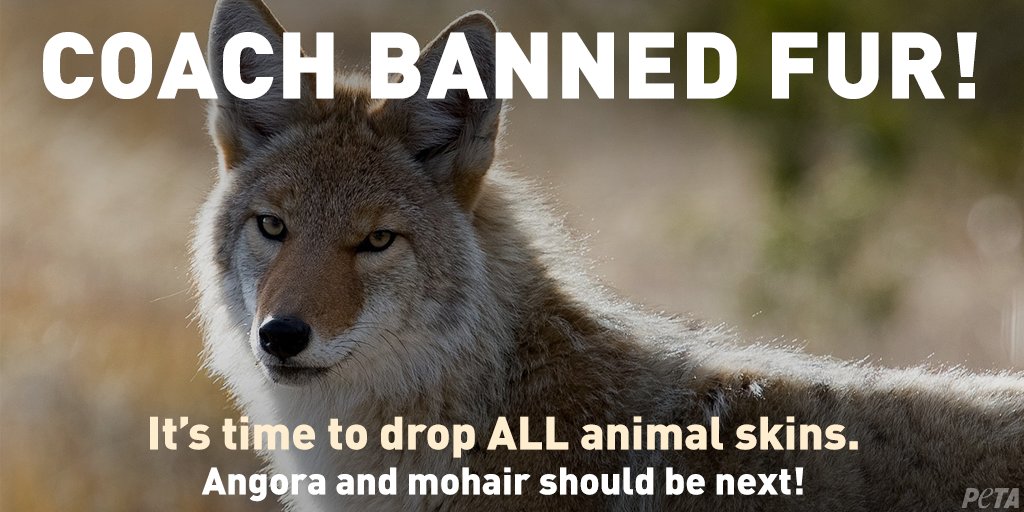 Coach joins the hundreds of designers and retailers around the world—including Burberry, Versace, Giorgio Armani, Gucci, Vivienne Westwood, Stella McCartney, and others—in banning fur, most of which comes from animals who spend their short, miserable lives inside cramped wire cages before being electrocuted, bludgeoned, suffocated, or even skinned alive.

The company’s compassionate move is further proof that the future of fashion is vegan.

Banning angora wool and mohair—as more than 300 companies already have—is also the right thing to do. Please quickly take action to urge Coach to extend its compassion to rabbits and goats by banning angora and mohair.

Coach banned fur because, as its CEO said, “it’s the right thing to do.” Please thank the company for taking this compassionate step and urge it to stop supporting horrific abuse of goats and rabbits by banning mohair and angora as well.

Thank you to everyone who helped us achieve this victory. Progress isn’t possible without you !

My comment: Yes! if we stay united, then we can win!

If we think that petitions and small steps do not work, we can only lose. With the mentality of “all or nothing” in animal welfare, we often end up to nothing.
In my city in southern Germany, the German Welfare Office had organized a systematic campaign against a department store chain, because the store sold fur heavily. I was part of this campaign.
Recently, the store official said that they no longer carries and sells fur!
Our fight has worked, so we will never stop fighting for animals.
Until death separates us from these!