DIRECT ACTION IN PROGRESS AT THE BELL SLAUGHTERHOUSE (SWITZERLAND): INCREASE OFFENSIVE COMPLICITY AGAINST THE SPECIESIST ECONOMY!

Blockade of the Bell slaughterhouse (Switzerland) by 134 antispecies activists from Angletterie, Belgium, France, Italy and Switzerland. Our place is between the knives and the victims. 17 hours of solidarity between activists to co-resist with the 600 animals killed every day in one of the biggest places of the speciesist massacre in Switzerland. Photographs: Julien Derreux # 269AnimalLiving #SmashSpeciesismByMakingARevolution #JusticePourLesAnimaux 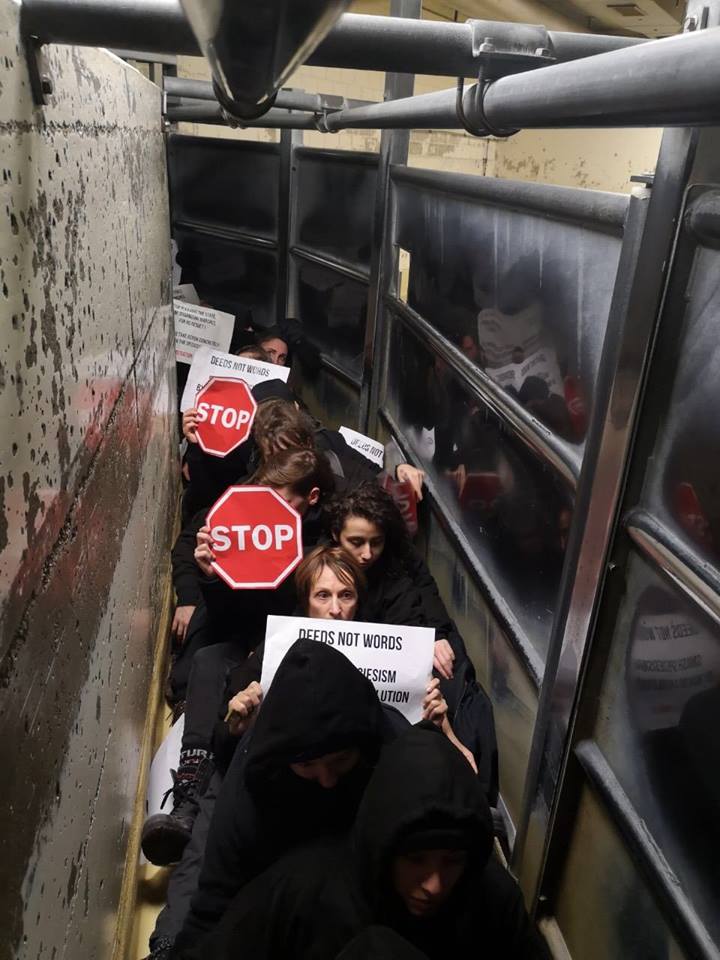 The 134 activists come from England, Belgium, France, Italy and Switzerland and start on 21.11.2018 their ninth hour of blocking at the Bell slaughterhouse (Switzerland).
Despite the terrible and delirious repression of antispeciesists activists practising direct action, they have chosen to continue along this path.
We should all show them our support and above all show, as they do, solidarity with the oppressed who resist alone in these places.
By intervening between the knives and the victims, these 134 antispeciesists activists practice a new form of “defense for others” and break this speciesist dividing line between bodies worthy of defense and those who, disarmed or made abusable indefinitely, are left defenseless.

They have shut down one of Switzerland’s largest slaughterhouses and bent the speciesist industry. No individual will lose his/her life in this place today, no one will be pushed into this terrible “death row” stained with the fear and blood of the victims.
Have we experienced so many of those moments when the balance of power reverses to neglect them when they occur?
The real radicality is taking action.
Direct action brings efficiency and power; what are you waiting for to join them?

My comment: “Exploitation has become obsolete as an evolutionary strategy” Colin Tudge said.
And that is what we, who fight against the exploitation of animals, must enforce and prove by all peaceful means.

Our undercover operative who worked for 8 months inside the Haifa slaughterhouse speaks for the first time exactly one year after the broadcasting of the investigation.

Special thanks to the ‘Animals’ association which concurrently conducted their own undercover investigation inside the same slaughterhouse. Their recordings are incorporated in the operative’s testimonial. The operative has asked to remain anonymous for fear of reprisal. What he did was incredibly brave and he is a hero for the animals. For 8 months he had to witness the horrors in silence in order to bring them to light, for the world to see.

If you have been affected by this video and would like to make a change, please click on the following link for a 22-day vegan experience (International) where you will receive support every step of the way.
bit.ly/GoingPlantBased

From me: For this video, I miss the words to write a correct comment.
I have only one message, to all countries, and especially to the country that has suffered the most under fascism, Israel: Abolition of all Dachau for animals, no fascism for animals in slaughterhouses and in everyday life! Such crimes against animals in slaughterhouses revive times that were a disgrace to humanity.
Israel knows it best!