In the district of Schwandorf (Bavarian), radical hunting opponents hang out threatening letters against hunters for weeks. Six high seats have now been destroyed in the area.

Torn up high seats, damage in four-figure height, leaflets on the trees – in the district of Schwandorf (Bavaria) again radical hunting opponents are up to mischief. Six pulpits have destroyed unknown persons in one night in the area of Maximilian Freiherr von Wiedersperg at the end of October. Presumably with a vehicle as a tractor, the seats were torn from their anchorages and overturned.

Several weeks earlier, more than 20 leaflets were stacked on tree-lined footpaths in the area where hunters were labeled as “murderers” and “brutal animal abusers.” The destroyed high seats are not the first property damage to Revier facilities in the area. As early as 2014 unknown people sawed tall ladders and posts. In May last year even a residence was blown up. The baron (!!!), however, does not start from targeted actions against him. Damages were also reported from other areas, the injured party told the editors.

The police secured traces, but the evaluation would take some time, so a spokesman told the editors. The police asks for information from the population.

Aha… First of all, one thing must be clear:
For 80 years, the nobility in Germany has officially been abolished. Since then, aristocratic associations have worked to ensure that nobody notices it.
But the activists have already noticed it!
And reminded the hunter (without “baron”) that wrong titles and wrong seats have to be taken out of circulation.

Dirty stables, injured buffaloes and dead calves: The pictures, which were taken in August 2018 on twelve buffalo farms in Campania, southern Italy, reveal the naked truth behind the popular luxury product buffalo mozzarella. The research by FOUR PAWS, journalists and the Wildlight team shows that male buffalo calves are particularly affected. Considered as a worthless byproduct, juveniles are often deliberately neglected. If they do not die as a result of the poor husbandry conditions, they are slaughtered on average 30 days after birth. FOUR PAWS urges supermarket chains, dealers and producers to take responsibility. 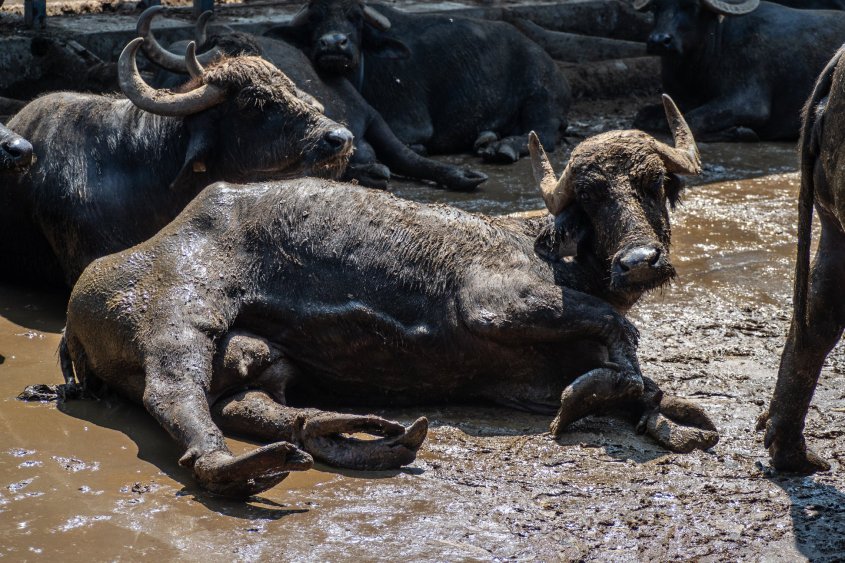 “The pictures show calves, who apparently have been lying dead on the ground for a long time – and in front of the other buffaloes. Other live calves were so emaciated they could barely stand. Without contact with other animals and reasonable care, the calves are kept in much too small, cage-like enclosures, “reports FOUR PAWS livestock expert Hanna Zedlacher. “Around 30 days after birth, the calves are old enough to be transported to the butcher. In 2017 alone, over 52,000 buffalo calves were legally killed in Italy. The meat is usually processed into dog food, “says Zedlacher. 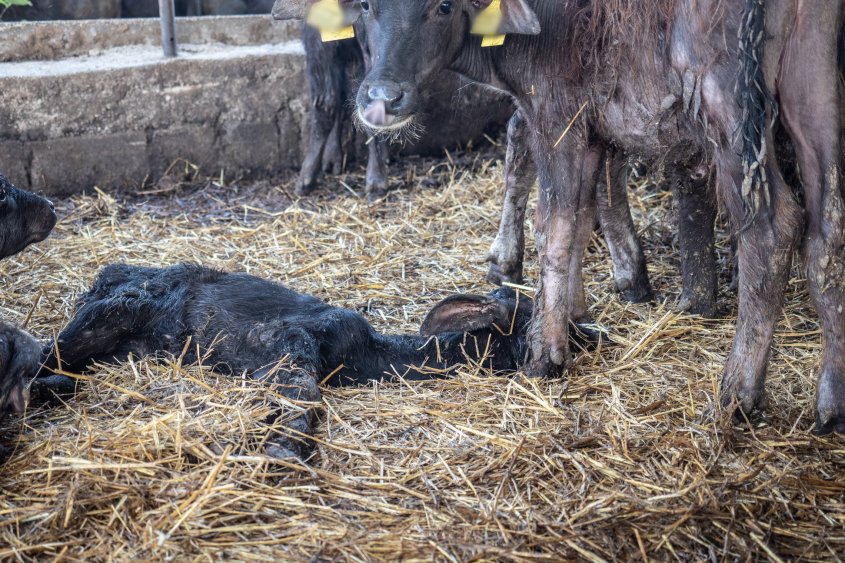 The FOUR PAWS investigation material shows that adult female buffaloes also suffer from miserable housing conditions. Intensive livestock farming means little or no runoff for the animals. Ponds or pits that serve to cool down are rarely available. The stables and the animals are filthy. Many of the buffalo suffer from overgrown hooves, tumors and untreated injuries.

Buffalo farms have been in focus since 2014

Already in the summer of 2014, FOUR PAWS drew attention to the bad situation of Italian buffaloes. Four years later, however, the demands made at that time are still not fulfilled everywhere – FOUR PAWS sees the responsibility of the producers, but also of the supermarkets and traders. It is important to ensure the standards.

“Only buffalo mozzarella from pet-friendly farms should be offered. We demand regular checks, appropriate posture and medical care. We also expect humane solutions for male calves. The unnecessary killing of the animals must come to an end, ” Zedlacher demands and adds: ” We recommend consumers to inform themselves about the origin of the buffalo mozzarella and to refrain from buying in case of doubt. ”

74% of the approximately 400,000 buffalos living in Italy are bred in Campania. There are 2,212 buffalo farms nationwide. The vast majority – 77 percent – are pure milk producers, 14 percent are pure meat producers and only 9 percent use the animals for both milk and meat production. Buffalo mozarella from Campania carries the DOP seal (Denominazione di Origine Protetta, Protected Designation of Origin) and is the export hit of Central and Southern Italy.

47 million kilos, Mozzarella di Bufala Campana DOP ‘- buffalo mozzarella in short – were produced in 2017 in Italy. To meet the high demand for luxury cheese, many Italian farmers are focusing on efficiency rather than animal welfare.

The main customers of the luxury cheese are France, Germany, Great Britain, USA, Switzerland and Spain.

My comment: “It is important to ensure the standards” says FOUR PAWS”!

By whom should the standards be respected?
From the milk mafia?
From the farma owner for bufallos?
Or from a corrupt system that closes its eyes and defends the agrarian mafia when it comes to animal welfare?
That’s how the system works, and every system in the world.
Not with standards.
But with fascist rules, that will be followed by state lackeys and indifferent consumers.

New York-based fashion label Coach is joining the avalanche of brands who are taking a stand against fur, with a plan to phase it out in the short term before a complete ban by fall 2019.

The label, under the direction of chief executive Joshua Schulman, said that they made this humane decision based upon feedback from employees and shoppers who oppose the use of fur.

“We understood from our employee population and from our consumers that it was important to them that we take a stand on this issue,” said Schulman. “We’re doing it because we believe it’s the right thing to do.”

Although the ban will see Coach stop using furs such as mink, coyote, fox and rabbit, they will continue to use other animal products like mohair and angora — as well as leather.

Coach teamed up with the Humane Society of the United States (HSUS) to discuss the move before the announcement, and the organization helped educate key senior executives about the cruel fur industry.

“The announcement from a brand as iconic as Coach is the latest indication that fur is just not fashionable,” said Kitty Block, CEO and president of The Humane Society. “Consumers worldwide are saying no and fashion leaders are following.”

The anti-fur movement has had some big wins this year. Notably, Los Angeles voted in favor of a ban on the manufacture and sale of fur last month, which will see it become the largest city in the world to go fur-free. Prior to that victory, in March this year, San Francisco joined West Hollywood and Berkeley in voting to enact legislation banning the sale of fur.

A slew of fashion labels over the last few years have made similar pledges, including Burberry, Gucci, Armani, Stella McCartney, and Vivienne Westwood, along with many more.

Even iconic fashion magazine InStyle has banned the promotion of any products that use fur — both within its photo spreads and advertising materials.

“The fur trade kills more than 100 million animals each year, with animals used for fur either trapped in the wild, where they remain in cruel leghold traps for days without food or water, or raised in cramped cages for their entire lives and then killed by electrocution or gassing,” said Block.

The tide is well and truly turning for the barbaric fur industry, and before long, those who continue to use it will be in the minority. We hope that continued decisions like this spell the end for the practice, consigning it to the history books forever.

“Fur Sucks When Its Worm By Humans Instead of Animals” 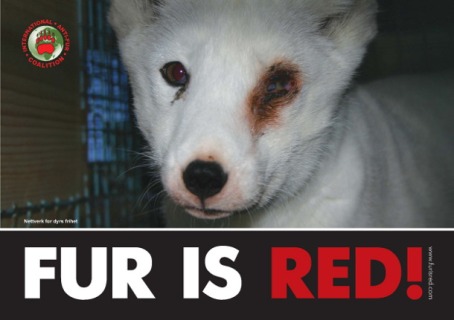 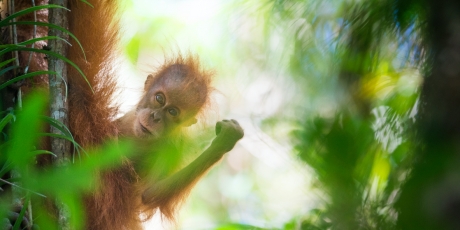 This is wild! Scientists just announced there’s a new species of orangutan that we never knew existed before… and they need our help.

They’re called Tapanuli orangutans and they have their own distinct genes and features.

But there’s only 800 of them left — and a new dam project is about to rip through their forest in Indonesia.

But there’s still hope: the scientific announcement has made headlines, and investors are backing away from the project. Let’s end it once and for all by getting the Indonesian government to stop all industrial projects in the Tapanuli’s home land!

– when we reach a million signers we’ll take our call directly to the Indonesian authorities!