“Animals are my friends … and I do not eat my friends,” said George Bernard Shaw.
Not only does it sound logical, but it is – and means nothing more than: animal lovers must become vegans!

On the other hand is often objected: It may indeed be correct in principle, no animals to eat. But if I’m going to become a single vegan now, that does not change anything, that’s not important at all. Who says that, should remember:

Every day thousands of people are killed in the world. So it would not matter if I killed one too. Nevertheless, we do not think and act that way!

The animal industry is not the only area where things pass that we condemn, without being able to directly influence them right now: the arms race, for example, was no different. What did those do who opposed it? They have demonstrated against it. To become a vegan is also a kind of demonstration: It demonstrates that it is wrong to torture and kill sentient beings for such banal purposes as our tastes. Here, veganism is not just a demonstration, but the most important and urgent one: No one can convince another of the correctness of a thing that he does not practice himself!

None of the great movements against injustice and oppression, such as against slavery, racism or sexism, would ever have been brought to life (let alone be successful) if their representatives had only fought if they were sure of their success!

For all the great crimes of human history, the participants have subsequently justified themselves in this way: what should I have done as an individual? It was not all about me! 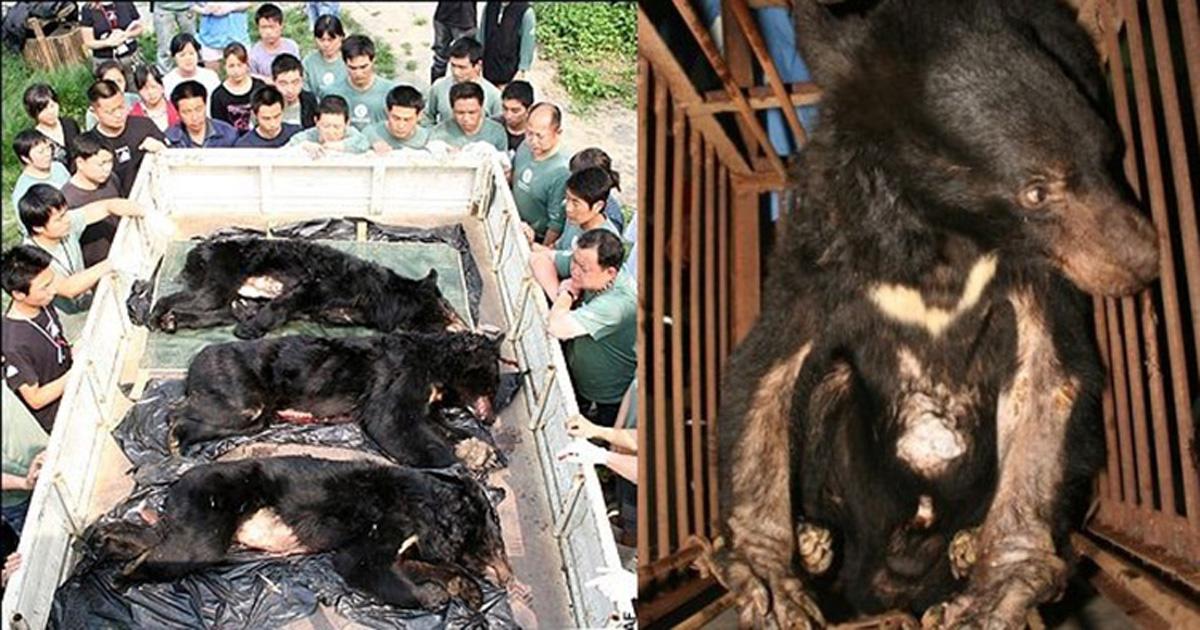 Addressed to: Government of China and 2 more

This petition will be sent to:

Yesterday I read that a mother bear escaped from her cage and drowned her baby to save her from a lifetime of suffering in a bile farm, then killed herself by banging her head against a wall. I cry and I still get goose bumps when I think about that scene and all that these bears suffer in these places where they are “milked” bile throughout their lives until they die from exhaustion or some infection from open wounds that have. Imagine living that way for more than 30 years, I would also think about committing suicide.

In many countries in Asia, such as China, there are these farms where the bears live in small cages called “crush” that are deliberately small so that the animals can not move, constantly hooked to a catheter that drains the bile while the animals live constantly drugged.

The bears that survive this constant torture of decades, unable to produce more bile, are killed and their body is sold.

It is time for all of us to fight to end these farms of torture, abuse and death.

PETITION TARGET: Australian Ambassador to the US Joe Hockey

Locked away in the laundry room without water or food, desperately crying for help while forced to wallow in a pool of urine and feces for two weeks — we can only imagine the immense fear, pain, and trauma endured by two dogs that suffered this fate in the suburb of Albury, New South Wales, Australia.

By the time RSPCA staff discovered two-year-old Staffy cross Benji and six-month-old Ruby the Kelpie last year, it was too late: their stiff bodies clinging to each other for comfort, both animals had died from a combination of starvation and dehydration, with their guardian, 21-year-old Kimberly Thi-My Atwell, admitting she hadn’t given them food or water for 11 days.

Atwell appeared in court this week to face the consequences of this appalling abuse.

Her punishment? A fine of $144 and 80 hours of community service, along with a ban on owning animals for only five years.

This paltry sentence, handed down by Magistrate Rodney Brender at the Albury local court, is nowhere near fitting for this extent of cruelty. Such a slap on the wrist sends a dangerous message that those who torture and kill animals will face hardly any consequences at all.

Sign this petition urging  the Australian government to push for stronger laws — and stiffer enforcement — in the state of New South Wales and throughout Australia, so animals are protected from cruelty and shocking crimes like this are treated with the severity they deserve.

Target: Xi Jinping, President of the People’s Republic of China

Goal: Prevent China from overturning a ban on the trade of endangered tiger and rhino parts.

Rhinos and tigers could soon go extinct if a trade ban is overturned in China. The Chinese government has announced plans to reverse a 25-year-old ban on the trade of rhino and tiger parts. According to the news reports, the Cabinet cloaked their intentions in promises of “controlling the trade” and that they would merely be making exceptions for “special circumstances;” these circumstances operate on the claim that rhino horns and tiger bones are essential to medical research and practices.

The World Wildlife Fund predicts “devastating consequences globally” should this ban be removed. Not only are rhinos and tigers among the most threatened species on the planet, but there is no concrete evidence of these parts’ effectiveness in health care or medicine. Thousands of these animals have died for nothing beyond a profit; only roughly 3,000 tigers remain and 30,000 rhinos, with the latter’s numbers dropping year by year. To make matters worse, the ban has been very lax in the past, with the government only seriously cracking down in recent years.

We cannot allow China to deplete the remaining rhino and tiger population for the sake of monetary gain and a medical myth that has yet to be and may never be proven true. Sign this petition to demand China keep the ban on the trade of these animals’ parts in place.

Your government’s plan to overturn the 1990s-era ban on the trade of rhino and tiger parts could wipe out both species entirely within just a few short years. The Cabinet has claimed they will only make exceptions and promised to “control the trade;” the main reasoning is said to be the belief that rhino horns and tiger bones are essential to medical research and practices.

You cannot allow this ban to be reversed. Too many poachers have managed to keep the trade going in spite of it, with the laws only recently tightening to stop their black market operations. The number of living rhinos is dropping every year, and only roughly 3,000 tigers remain in the world. You must keep the ban on this trade in place and protect what remains of both these species.