“It is a scandal that animals continue to be transported under terrible conditions to third countries. The outcry after the 37 degree reportage “secret thing animal transports” was once very large – but now you continue just as before, “said Dr. Rusche of the German Animal Welfare Association. 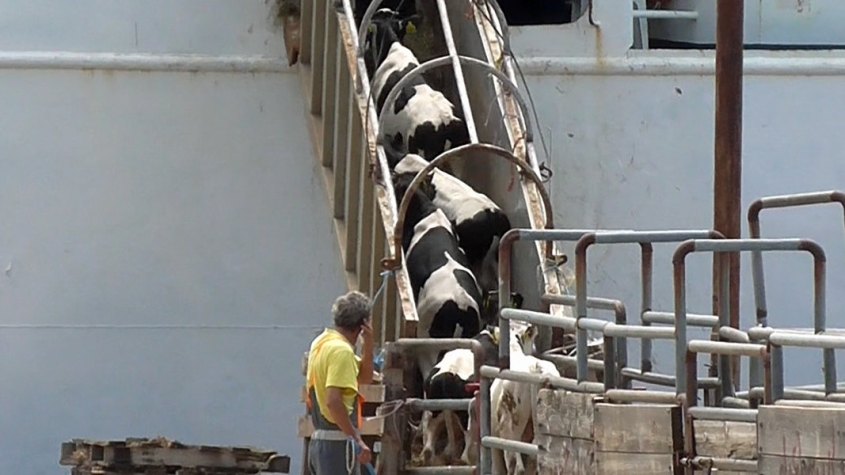 In their application, the Greens called for a suspension of transports – as long as the requirements of the EU regulation on live animal transports in third countries are genuinely met – as well as limited transport times. The FDP (free democrats)  demanded the suppression of transports, if they do not meet the European minimum standards, as well as compliance with the EU Regulation with appropriate controls, reports the German Animal Welfare Association.

END_OF_DOCUMENT_TOKEN_TO_BE_REPLACED

This Remembrance Day, We Must Not Forget The Animals Lost In War

Not them, nor anyone or anything else that has made unimaginable sacrifices for every single one of us alive today.

Very few of us find this weekend lacking in emotion. Perhaps from our own personal experiences or just hearing stories and memories of war from older relatives, we all make a point of honouring the dead by wearing a poppy, respecting the two-minute silence, as well as attending our local Remembrance Parades too. All of these actions help us reflect deeply about how lucky we are as a nation; and how it’s all due to those brave heroes that fought, and still continue to fight, for our freedom in every bloody battle, conflict, and terrible war.

But as well as the millions of human heroes that gave the ultimate sacrifice, please also spare a thought this weekend for all the poor animals that also helped bring us peace, specifically employed by mankind, and employing all manner of skills, that both served and died alongside British and Allied forces in wars and campaigns. On the Animals in War Memorial in London’s Park Lane, there’s an inscription that simply reads “They had no choice.”

Famously of course, horses always formed the cavalry, able to draw heavy artillery and providing an incredibly useful all-purpose and reliable method of transportation. We’re all aware of Michael Morpurgo story ‘Warhorse’, but tragically eight million warhorses lost their lives during the Great War. Most died from disease, starvation, or exposure; one of mankind’s most noble and loyal servants reduced to shivering bags of skin and bones, some even resorting to chewing on their own rugs for food.

In the deserts, mountains, and tropics, with much tougher terrain, camels and elephants were better suited to help our soldiers, playing a crucial role in warfare; just like those oxen, mules, and donkeys that carried supplies, arms, as well as our dead and wounded. Mules serving in the dense jungles of Burma even had their vocal cords severed, ensuring their loud braying would not betray Allied positions to the enemy.

Unsurprisingly dogs also suffered high casualty rates as they were used to relay messages between soldiers in the trenches. Furthermore their excellent sensitivity to smell meant that they were employed to search for mines and trip-wires, commonly leading to in injury or death from resulting explosions. Some would rip their paws to shreds scrabbling through the rubble of bombed-out buildings in UK cities attacked in the Blitz, looking for survivors or bodies.

In contrast nowadays it’s rare for a mine detection dog to be killed or injured, as these dogs are trained not to step on the mines, and the way they are worked is very strictly controlled. Usually once a mine is detected the dog is trained to sit beside it as a sign to the handler that it’s found something. Furthermore dogs are often not heavy enough to set off anti-tank or anti-personnel mines. Serving teams of all nationalities, these explosive-detecting dogs are extremely well looked after, and deeply loved by their handlers; not really surprising since the handler’s life and often their unit’s moral is often determined on the close bond they share with their faithful four-legged pals when working under extremely stressful conditions.

Did you know that ‘Para-dogs’ were once dropped behind enemy lines to assist with covert operations? And in the Soviet Army, dogs even had explosives strapped to their backs to be used as anti-tank weapons, trained by placing food directly under tanks. The idea was that these apparently starved dogs would learn to associate tanks with meals, and would then proceed to run under any German tanks they saw to find their dinner. Unfortunately the Soviets vastly underestimated their dogs’ intelligence, as the first time they were used, instead of attacking the German tanks the hungry dogs recognised the Russian tanks used in training, running straight back under them instead. After this catastrophic misjudgment the use of anti-tank dogs was very quickly abandoned.

Unbelievably war isn’t just about man against man, often supported by these brave animals. Were you aware that during wartime some animals were even pitted against other animals? For example British carrier pigeons delivering crucial messages to Front line troops in both First and Second World Wars would suffer multiple attempts to prevent them reaching their destinations; German hawks were waiting to attack our unwitting winged messengers at the Pas de Calais. Between the hawks, the bullets, and Mother Nature herself, a staggering 100,000 pigeons were killed between 1914 and 1918, with many of these remaining avian survivors limping home with oil-clogged feathers, shot-away wings, and ripped-open necks. The difference made by these birds was absolutely crucial.

Then there were the cats such as ‘Frankenstein’ on warship HMS Belfast, who had his own hammock and was kept on board to protect the food stores from the many rats and mice. Canaries were also employed in wartime to alert sappers to gas; and last, but by no means least, the glow worms, by whose soft light World War I soldiers would read their maps in their last moments before going over the top. Even in modern wartime dolphins and sea lions are deployed to help detect naval mines.

We must never forget. Not them, nor anyone or anything else that has made unimaginable sacrifices for every single one of us alive today.

Eight million horses and countless mules and donkeys died in the First World War. They were used to transport ammunition and supplies to the front and many died, not only from the horrors of shellfire but also in terrible weather and appalling conditions. Mules were found to have tremendous stamina in extreme climates and over the most difficult terrain, serving courageously in the freezing mud on the Western Front and later at Monte Cassino in World War II. Equally they toiled unflinchingly in the oppressive heat of Burma, Eritrea and Tunisia. There are many inspiring and often tragic stories of the great devotion and loyalty shown between horses, mules and donkeys and their masters during some of the bloodiest conflicts of the 20th century, as can be read in Jilly Cooper’s moving book Animals in War, published by Corgi.

The dog’s innate qualities of intelligence and devotion were valued and used by the forces in conflicts throughout the century. Among their many duties, these faithful animals ran messages, laid telegraph wires, detected mines, dug out bomb victims and acted as guard or patrol dogs. Many battled on despite horrific wounds and in terrifying circumstances to the limit of their endurance, showing indomitable courage and supreme loyalty to their handlers.

More than 100,000 pigeons served Britain in the First World War and 200,000 in World War II. They performed heroically and saved thousands of lives by carrying vital messages, sometimes over long distances, when other methods of communication were impossible. Flying at the rate of a mile a minute from the front line, from behind enemy lines or from ships or aeroplanes, these gallant birds would struggle on through all weathers, even when severely wounded and exhausted, in order to carry their vital messages home.

Elephants, camels, oxen, bullocks, cats, canaries, even glow worms — all these creatures, great and small, contributed their strength, their energy and their lives in times of war and conflict to the British, Commonwealth and Allied forces during the 20th century.

This Memorial is a fitting and lasting tribute to them all.