It is not the first time that we see burning elephants. The habitat of Asian elephants is shrinking. A crowd of people in an Indian village brutally attacked an elephant and his cub and shot the couple with firebombs. After getting close to humans, they were shot at with firebombs. The problem: Indian elephants roam huge areas. There is a conflict: human against wilderness.

Elephants stubbornly follow their old ways because they know they will not destroy a single habitat. When the villagers plant a tea or coffee plantation in their route, they’ll just go through it. If someone scares them off with a blast or a fire, they’ll run amok.

Due to the rapid deforestation of forests in India, wild animals have less habitat and this is increasingly driving them into conflict with humans. The angry villagers mercilessly attack the elephants, as you can see in the photo.

If the villagers do not have firebombs to disperse the elephants, they use flaming torches. As in the following photo, here a group of men are chasing a herd of wild elephants. 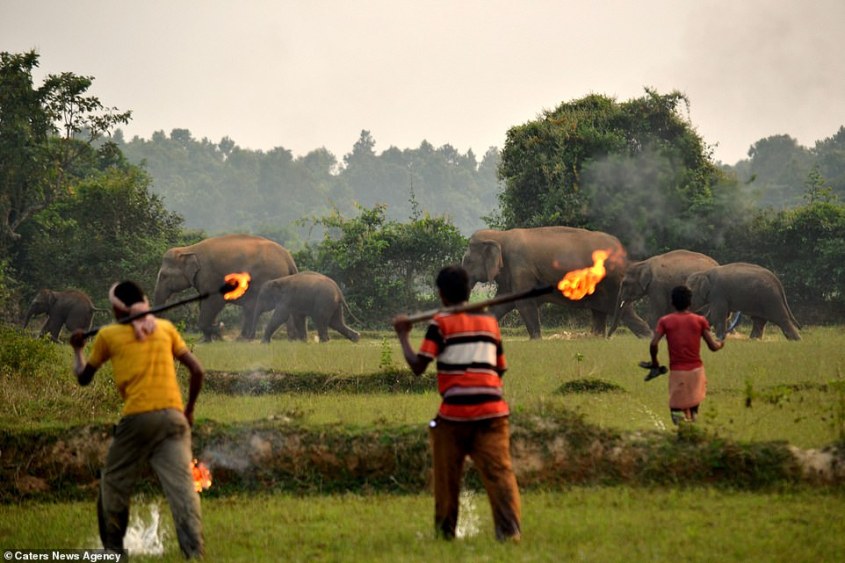 This happens because the villagers have to save their crop, said the photographer Hazra the news agency Caters. His photo won the first prize in the Sanctuary Nature Foundation Photo Contest. Now he shows new photos to illustrate the conflict between elephants and humans.
This week, another elephant mother was detonated with her calf!

Indian elephants are considered endangered. Their stock numbers have fallen by over 50 percent since the 1940s.

The big animals have to spend up to 19 hours feeding daily and produce about 100 kg of manure per day. Especially these men who attack elephants with firebombs benefit from this crap.

An elephant mother and her calf are trying to cross the railroad tracks that lead through their natural habitat.

Photographer Biplab Hazra said the goal of his documentary photos is to raise awareness of the population, and to draw attention to these problems, which put the habitat of elephants under danger.

A large elephant herd crosses a railway line built in Bishnupur, India, into its natural habitat.

Photographer Biplab Hazra, who took the heartbreaking pictures, said, “There are many elephant corridors in human villages.”

We have already reported that not only in Thailand are the elephants captured. 30,000 euros is worth a cub. Therefore, many elephants are also imported from other countries, for example from Myanmar!

This terrible industry is booming because foreign visitors ride elephants or pay a lot of money for the elephants to do tricks.

Elephant babies are ripped off by their mothers, and when the elephants defend the young animal, other herd elephants are shot dead. Locked up in a small cage or hole in the ground, tied up and cruelly maltreated, the elephant baby is taught to fear and obey people.

The attack has terrified online communities, and many have engaged in social media to condemn the heartless attack.

My comment: The human species are becoming more and more and the animal species are becoming less and less.
The conflict between man and beast is artificially made by human hands and is based on the fascist belief that only the stronger has the right to life and habitat.
Whoever is the weaker and its existence disturbs the Stronger, loses his home, his family, his freedom, his life.
This is the justice of the ruling species.
And those who disobey are destroyed.