A Russian restaurant in the region of Kabardino-Balkarian Republic is holding a lion and bear captive in miserable conditions. The neglected animals are suffering day in and out in cramped metal enclosures with a hard concrete floor and no space to move, roam, or act naturally.

An eyewitness informed LFT of the sad plight of these helpless animals after visiting Cafe Karavan. The animals are caged directly next to the restaurant for people to look at. They have zero interactions with other animals and live a lonely, dejected life.

In these exclusive eyewitness photos, a skinny lion and bear live side by side in barren cages. A small vat of murky water is visible along with an open crate that is too small to provide adequate shelter from the elements.

It is time to save these poor animals from this life of misery.

Sign this petition urging Russian Ambassador to the US Antonov to take action by demanding that these beautiful animals be freed from imprisonment and rehomed to a sanctuary to live in peace and freedom. 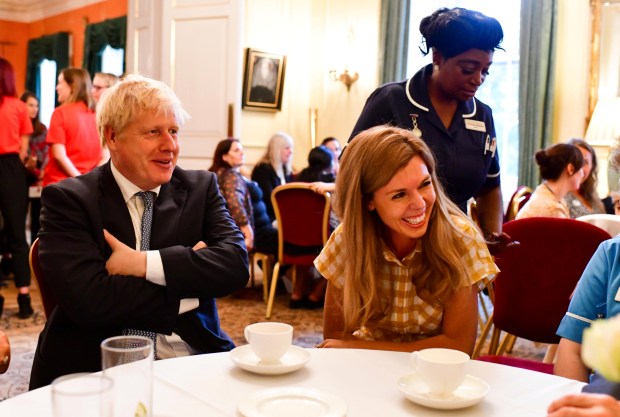 The 15-week-old pup – which faced near-certain death after being abandoned by a Welsh farmer, has moved into No. 10 today, 2/9.

He was cast away by his ruthless breeder for having an undershot and misaligned jaw – meaning he couldn’t be sold, the Mail On Sunday reports. 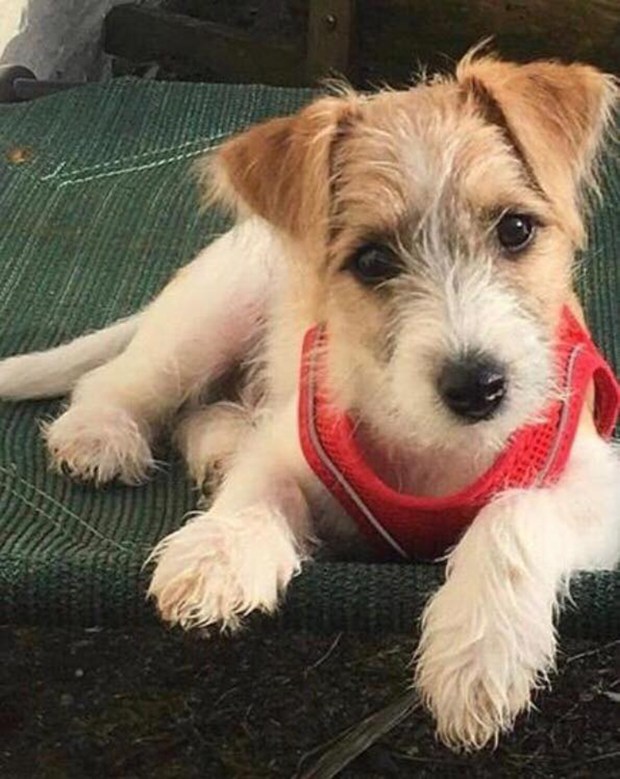 The as-yet-unnamed pup was then rescued by Eileen Jones of the volunteer group Friends of Animals Wales – which rehabilitates sick and discarded animals.

Unlike Larry the No10 cat, the dog will belong to Boris and Ms Symonds rather than whoever occupies Downing Street. 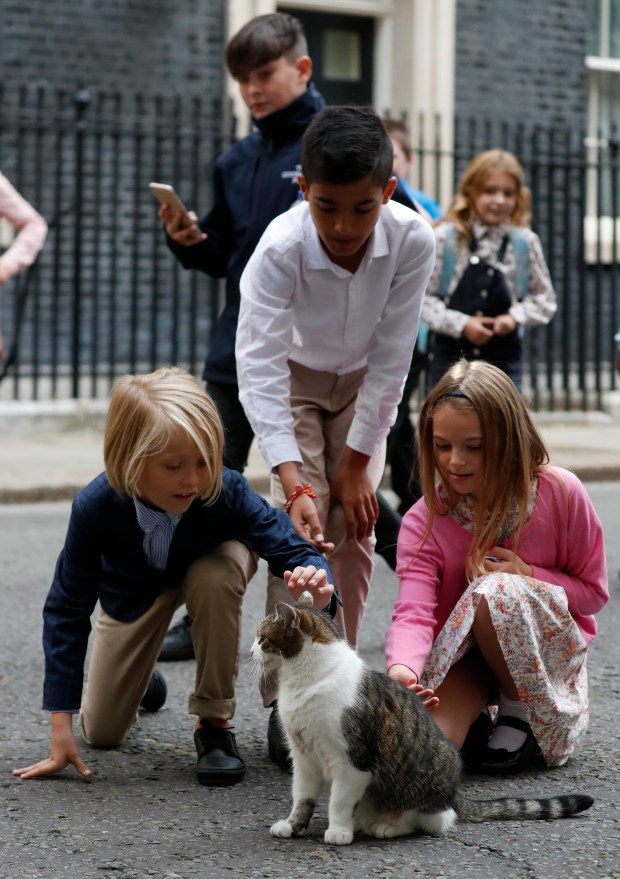 Larry the No 10 Cat is a favourite with children; the Press crews, everyone !

And he will be trained to get along with chief mouser Larry – who is famously territorial.

Staff have offered to take the pup on walks after voting overwhelmingly in favour of getting a dog when polled by the PM. 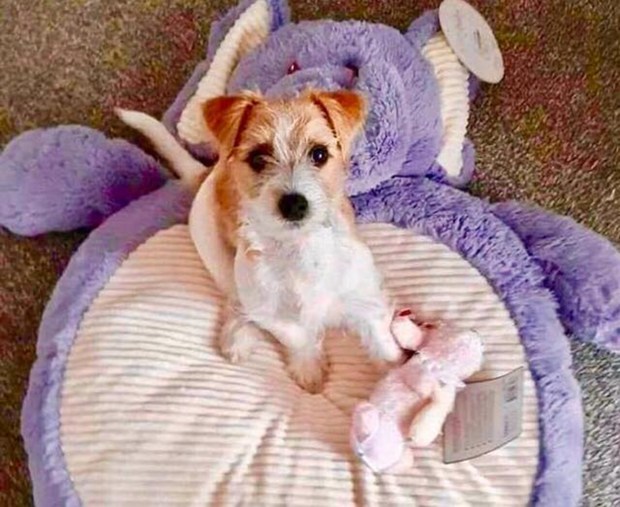 Known as Lucy’s Law, the clampdown will come into force next April and targets third- party puppy sellers who breed dogs often in brutal conditions.

Lucy’s Law is named after tragic pet Lucy – a Cavalier King Charles Spaniel who died of her injuries just three years after being rescued from a terrible puppy farm.

The new legislation – backed by celebs Ricky Gervais, Rachel Riley and Brian May – will make it illegal for a puppy or kitten to be sold without seeing it interacting with its mother in the place where it was born.

PupAid founder Marc Abraham, who helped spearhead the legislation, said last night: “I’m absolutely delighted that the Prime Minister and Carrie have chosen to rescue a puppy, which will hugely help to highlight Lucy’s Law.’

He added: “Eileen is an absolute hero who has racked up massive vets’ bills picking up these poorly puppies and breeding dogs.

“I hope this encourages others to adopt and donate to her work.”

Boris and Carrie are both animal welfare supporters – we hope that this sees a bright future for animals during his time in Downing Street.

No. 10 Security policeman knocks on door to get Larry the cat into the warm: 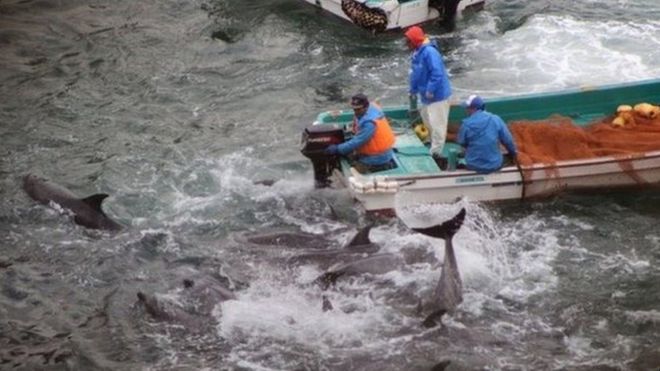 Japan has started its controversial annual dolphin hunt in the coastal town of Taiji.

The hunt sees the animals driven into a cove where most are slaughtered for their meat with knives in shallow waters.

Other dolphins are sold to aquariums and marine parks.

The Taiji hunt has been carried out for decades and gained global attention when it was the subject of the Oscar-winning documentary The Cove in 2009.

This year’s Taiji hunt kicked off on Sunday, but according to Japanese media the boats returned without any dolphins.

According to environmentalist group The Dolphin Project, five Risso’s dolphins were killed on Monday.

The overall quota for the season allows for more than 1,700 animals to be killed or captured.

Environmentalists say the drive hunt is extremely cruel and the dolphins can take up to 30 minutes to die by suffocation or drowning.

Yet the fisherman from Taiji say the community’s livelihood is dependent on the trade.

The dolphin hunting season is expected to last for about six month.

Demand for dolphin and whale meat has been on the decline over the past years and both have been found to have unhealthy levels of mercury.

Animals caught alive and sold to marine parks fetch a far higher price than the meat yet there is growing pressure on the parks not to buy dolphins captured in Taiji.

Japan has already come under criticism this year for resuming commercial whaling after it left the International Whaling Commission (IWC).

Commercial whaling ships left port on 1 July this year and the first whales have already been killed and sold.

Under an IWC moratorium, whaling had effectively been banned since 1986.

Japan though had never fully stopped whaling – it has been conducting what it said were research missions killing hundreds of animals each year.

The internet was in shock this past week when video of popular YouTuber Brooke Houts was released that shows her reportedly abusing her pet dog.
Houts is allegedly seen yelling, hitting, and pushing the dog. In addition, the footage suggests that Houts may have spit in the dogs face and abused the dog off camera, as viewers can clearly hear the dog whimpering.
This type of content should not be uploaded to any internet platform. It is violent and perpetuates this harmful behavior toward animals.
I urge you to immediately suspend Houts from using YouTube services.
Sincerely,
[Your Name Here]