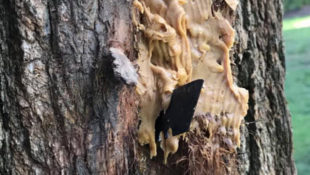 Goal: Punish the man who allegedly baited wildlife with a razorblade and peanut butter.

A cruel wildlife trap, containing a razorblade surrounded by peanut butter, was reportedly set at a public park. The trap attracted numerous small mammals, police stated, putting them at risk of injury and death. Demand justice in this case.

Town and state Environmental Police began investigating after they received reports of a tree with a razorblade sticking out of its truck at a public park. Upon closer inspection, they apparently discovered that the blade was surrounded by peanut butter in an attempt to attract local wildlife. Officers stated that multiple squirrels fell victim to the trap, though their injuries were not documented, and children played in the trap’s vicinity. The suspect claimed that he was trying to attract local wildlife, per reports, and a thorough search turned up no additional traps.

Sixty-five-year-old Brian McGrath was charged with animal cruelty, reckless behavior, and wanton injuries to trees. Sign below to demand that he receive the maximum penalty possible, if convicted.

Multiple animals reportedly fell victim to a cruel trap set at Goodwill Park, leading to charges of animal cruelty and wanton injuries to trees. Per officers, 65-year-old Brian McGrath placed a razorblade in a tree and smeared the area with peanut butter with the intent to attract local wildlife. It worked, per reports, and several squirrels suffered in the process. Children also apparently played in close proximity to the trap, meaning that they were also at risk of injury.

Anyone who could set such a cruel and painful trap is a danger to local animals and they must be punished. I demand that you prosecute this suspect and seek the maximum penalty possible, if he is convicted.

This is the 16th slaughterhouse in which we have filmed, but the first one located in Wales. Once again, we have brought to light evidence of blatant staff incompetence and brutal treatment of animals.

This was further amplified by an extremely fast paced slaughter-line. Investigators filmed in Spring and Summer of this year.

We brought to light many concerning issues including workers pinning down and cutting the throat of a sheep who appears fully conscious, and a stun-man picking up a sheep by her fleece and neck and hurling her down the slaughter conveyer line, whilst shouting. Another worker grabbed sheep by their throats or fleeces and threw them backwards into the conveyer, often with an audible crash.

We believe this provides vital evidence that makes the case for mandatory CCTV to be introduced across Welsh slaughterhouses to bring Wales in line with England and plans proposed for Scotland.

Without our covert cameras in place, this horrendous situation may have continued, unchecked for some time. Join us in calling on the Welsh government to introduce independently monitored mandatory CCTV without delay across Wales.

Write to the Welsh government now

Teen left blind and deaf after living off crisps, chips and white bread

The unnamed youngster admitted avoiding fruit and vegetables since primary school because he did not like the textures.

A teenager who for years had lived off a diet of chips, crisps, white bread and processed meat has lost his hearing and sight because of a lack of vitamins and minerals.

The unnamed boy from Bristol had first gone to his doctor complaining of tiredness when he was 14.

Tests showed that he had low vitamin B12 levels and macrocytic anaemia – a condition bringing larger-than-normal red blood cells. It was said the ailments had been brought on by him being a “fussy eater”.

A case report by researchers from Bristol Eye Hospital, published in in the Annals of Internal Medicine, said he was given B12 injections and dietary advice, but when he returned to the doctor a year later his hearing and vision were already impaired.

The report said that “by the age of 17, the patient’s vision had become progressively worse, to the point of blindness”.

It was at this point that he confessed that since primary school he had “avoided foods with certain textures and only ate French fries, Pringles, white bread, processed ham slices, and sausage”.

“By the time his condition was diagnosed, the patient had permanently impaired vision,” the report said.

WAV Comment  – fruit and veg, that’s what your body needs.  Where were his parents ?

Nightmare comes true for Romanian sheep exported to the Gulf.

WAV Comment – as some of you will be aware, we at WAV were tracking and reporting on this consignment throughout its time between Romania and Iran.

Here are just 3 of our links from the time:

Well it seems that all of our concerns at the time regarding how the sheep would be treated, as well as the extreme temperatures which we reported on throughout the trip, have now surfaced. Please read the article below.

It was not only this shipment that has caused us concern. We were informed that Romania was planning on exporting around 200,000 live sheep to the middle east every month for the next 6 months or so. This is backed up in the report below which talks of 1 million sheep planned for export to the Gulf. We repeat what is said in the article:

Now that sun kissed MEP’s have finally returned from their Summer holidays; probably mostly oblivious to what has been going on, we call on them to take action to stop the export trade from Romania. As we said recently we will be writing to our MEPs on this issue and also that of the ‘box’ trailers (see picture below of sheep transporter) which are used to carry live animals all over Europe.

Yes it is full of live sheep – a ‘box’ trailer as used in the EU.

Also, as we published, there have been major problems regarding cattle being shipped from Brazil to Turkey. What a terrible journey that must be for the animals; only to be religiously slaughtered once they arrive in Turkey, not even considering the carbon footprint which is left by a ship hauling cattle half way round the world. The massive fires in Amazonia just show that cattle ranchers there are burning the land to make yet more space for cattle to be raised; for export half way round the world !

These are all issues we will be raising with the EU in the next few weeks. We will publish our letters and concerns; and reproduce any correspondence we get back from the EU.

Animal protection organisations are calling for infringement proceedings against Romania, which allowed 66,000 sheep to be exported to the Persian Gulf in the middle of summer, despite the EU Commission urging authorities not to allow the vessel to leave.

In a recent letter to Animals International, Romanian authorities claim they required a 20% reduction in stocking density to mitigate heat stress. But the organization’s evidence, presented last week to the EU Commission, reveals that hundreds of sheep died by the time they reached their destinations, with an investigator describing the “piles of dead sheep” that were filmed at the unloading point in the Gulf.

They also saw surviving sheep being “beaten” as they disembarked in temperatures of over 40°C. While the initial destination was Kuwait, the vessel made 5 stops in the Gulf, increasing the risks of suffering and death from heat stress. Animals were unloaded in Saudi Arabia, Kuwait, Dubai, Qatar and Oman.

Romania’s daily reports were requested by the Commission after Commissioner Andriukaitis’s call on 10th July to Petre Daea, the Romanian Minister of Agriculture and Rural Development, to stop the cruel shipment was ignored. “These reports cannot be true. The vessel is a shipwreck that will not be allowed in Australia after the end of this year for being unable to have enough ventilation and access to animals. Even a single sheep on an empty deck will suffer severe heat stress once the temperature and humidity rises on the ship. The ship’s ventilation system is not able to reduce the heat and humidity below the ambient temperature, and in fact the temperature and humidity in the sheep pens will regularly be between 2 and 6 degrees higher than outside the ship. Even if stocking density was halved, the remaining sheep would still be subjected to unbearably high temperatures and would suffer heat stress during these months in the Red Sea and the Persian Gulf,” said Gabriel Paun, EU Director of Animals International.

According to the Romanian authorities, this was just the first shipment. Over one million sheep are planned to be exported this year alone to the Gulf, in addition to a further one million animals to be sent to Jordan and Libya from Romania. Such journeys see heat and humidity combinations reach levels that cause heat stroke, resulting in sheep literally cooking alive in the holds of vessels.

There is one light at the end of the tunnel: a proposed law by the Romanian Parliament aims to follow the positive example of Australia and prohibit the sea transport of livestock during the summer months, which would make it the first EU Member State to have such regulations. But Animals International says that even if the law is rushed through in September, it won’t necessarily mean that no more sheep undergo such journeys in the future, as exporters have their eye on at least three other European countries as sources of animals.

Eurogroup for Animals and Animals International had a meeting with the EU Commission last week, during which they presented some of the distressing footage from the Middle East. Both organisations are calling on the Commission to start infringement proceedings against Romania.