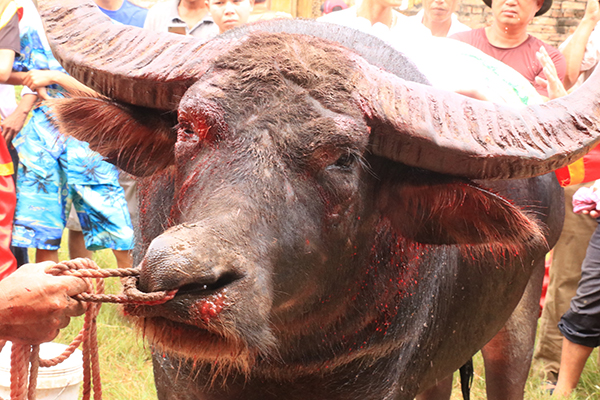 The “traditional” festival is a horribly violent and cruel spectacle of animal suffering.

Prior to the contests, owners do everything possible to agitate their buffalo into an aggressive state, banging gongs close to their heads, causing disorientation and profound stress which they then unleash on their equally distressed opponent.

After the fight, no animals ever survive. The buffaloes are taken out of the area, maimed and bleeding, and are violently killed and butchered so their meat can be sold for exorbitant sums.

Despite Animals Asia’s annual protests of the festival and attempts to have it cancelled, this year the only change will be that organizers have requested the number of buffaloes used in the festival events (the Do Son and Hai Luu) to be reduced by half. While that is an improvement, the suffering of even one buffalo is one too many.

“As a spectacle of violence and animal cruelty, the Do Son buffalo fights stand alone in Vietnamese culture. As Vietnam enters a new era of evolution and modernity, we call upon officials to end this cruel event. We should be setting an example for future generations with our benevolence toward animals. We should be teaching the children of Vietnam to respect animals, not abuse them.”

The event was almost shut down in 2017 after a trainer was gored to death by his own buffalo. That tragedy, along with a demand by the Ministry of Culture, Sport and Tourism that all “uncivilised” festivals be abolished, should have seen Vietnam move away from this 30-year-old “tradition”. But instead it has been permitted to not only continue, last year the event was allowed to return to national television airwaves in the country. Viewers could see trainers deliberately sharpening the horns of their buffaloes to raise the level of violence further.

“Despite demands by officials, sadly Vietnam still does not have a specific law to stop people from deliberately harming animals for entertainment. As long as these bloody fighting contests featuring animals such as dogs, cocks, goats and buffaloes continue, they will continue to be a stain on Vietnam’s image.

“The government and the vast majority of people want nothing to do with animal cruelty, but nobody has stepped up to stop it.”

Vietnam passed its first animal welfare legislation in 2016 in the form of the Animal Health law, but there is presently no provision to punish those who carry out cruelty to animals.

While amending a law is a long legal process which can take years, Animals Asia is petitioning the government to introduce and implement a Circular that would change the existing Animal Health law – a move which can happen far more quickly to outlaw deliberate cruelty to animals such as the Do Son Buffalo Fighting festival.

This year, Animals Asia has invited representatives from the Ministry of Culture, Sport and Tourism to judge and witness the event firsthand in the hope of persuading them to end it once and for all. We have also asked children and young adults to submit drawings of buffalo suffering at the festival along with drawings of buffalo being treated well under the umbrella theme, “Respect the Lives of our Buffalo”. These drawings will be sent to the Ministry after the festival.

It’s time to end the Do Son Buffalo Fighting Festival — a cruel spectacle masquerading as entertainment. Please sign our petition calling for the establishment of proper animal welfare laws in Vietnam.

Sharks are often portrayed as human-killing machines, yet it is we humans who are inflicting pain and death upon them.

Hunted for their flesh (usually their fins), sharks are killed by the hundreds of thousands each day. Shark flesh consumption is common in countries in Asia, and also consumed in some Scandinavian and African countries. Shark fin soup has been stated as the primary reason the numbers are so high, as it is seen as a delicacy, in comparison to the flesh from the remaining body.

Many of the individuals that are caught have their fins removed whilst still at sea, and are dumped back into the ocean. They will either die from lack of oxygen due to not being able to move to filter the water through their gills, or are eaten by other fish that have found them defenseless at the bottom of the ocean.

Despite being banned in many countries, sharks are still being killed at a higher rate than their population growth, meaning that the number of these individuals worldwide is still decreasing.

…We are not only a threat to the sharks.
We are a danger to the entire planet.
Or rather, as Nitzsche put it: “The earth has a skin; and this skin has diseases. One of these diseases, for example, is called “human.”

Berst regards to all, Venus

Nilgai buried alive. Forest department of Bihar ordered to kill 300 Nilgai as farmers complained that they are damaging crops. Hence the government ordered to shoot them & kill by recruiting hunters, one of the Nilgai didn't die after the gunshot…They decided to bury him alive pic.twitter.com/uFKdy3I2QS

In a video circulating locally since August 30, an earth mover is seen pushing the injured animal into a pit and burying it with mud.

The police in Bihar’s Vaishali district have filed a first information report against the driver of an earth mover used to bury an injured nilgai, The Indian Express reported. However, no arrests have been made yet.

The video has been circulating locally since August 30. It drew widespread outrage on Thursday. The earth mover is seen pushing the injured animal into a pit and burying it with mud.

The video was shot in a village under the jusrisdiction of the Bhagwanpur police station. The officer in charge of the station, Chandrabhushan Shukla, said: “We have booked a JCB driver on complaint of Lalganj ranger.”

The animal was shot by a Hyderabad-based shooter hired by the state environment, forests and climate change department, unidentified police officials told The Times of India.

“A drive was being carried out in the district to kill nilgais, but they were to be buried after proper culling,” Shukla told the newspaper. “This animal was, however, buried alive. The farmers were facing crop loss due to increasing population of nilgais in the district. Accordingly, a committee under the chairmanship of district magistrate had ordered culling of nilgais by hiring a shooter.”

Vaishali Divisional Forests Officer Bharat Bushan Pal told The Times of India that 495 nilgais were culled by the department between August 27 and August 31. “A forest guard has been suspended in the matter,” he added.

District Superintendent of Police Manavjit Dhillon ordered an inquiry on August 30. Several reports had suggested that Lalganj MLA Rajkumar Shah witnessed the incident. However, Shah told The Indian Express that it was a rumour. “I am not the Vaishali MLA,” he added. “I represent Lalganj and had no business to go there. Let the district police look into the matter.”

…to fight for the rights of the animals and we are not interested in making enemies in EU circles.
We are there for the weak, for those who have no voice, for the proletarians of this world, “who have nothing to lose but their chains”!

It’s an issue that has been a major concern for years, and today, under the barbaric conditions in which they run, is more relevant than ever to us: animal transports.

Actually, it should be banned already 6 years ago, since 2013 that life beings are transported for weeks under the most painful conditions on a ship or truck.
The 8hours campaign, one of the biggest European animal welfare campaigns ever,
had at that time the right to demand it with 1.2 million signatures.

But the EU is the strongest agrarian lobby, and that’s why this campaign is buried in the sand.

One of the worst consequences of globalization and global trade is the increase in animal transport and the expansion of transport distances. The specialization in the agricultural sector, the liberalization of markets, the international orientation of companies and the new information and communication technologies make it possible today to market animals internationally.

Published in 2018 bndestem.nl. a photo showing dozens of dead calves – victims of a collision between two trucks. They were Irish calves. On the way to Groningen. Because Ireland and the Netherlands are in the European Union, there are free shipments of goods or animals. When these early-dead calves died at the scene of the accident, they had already traveled a long way.

First through Ireland, then crossings by ferry and another trip of about three hundred kilometers. Why are a few hundred calves carting around Europe? Now these calves are dead. Again and again, accidents occur when one considers the cruel reality: Annually, around 170 million livestock transports take place in Europe alone.

Recently we have the cruel transport of 70,000 sheep to Qatar. Romania has carted 70,000 sheep out of Midia with the ship “Al Shuwaikh” into the Persian Gulf and in a heat of up to 47 ° C. This is not just a violation of EU law. That’s a negligent murder.

The subsidies paid by the European Union for the export of slaughter cattle to third countries have since been removed. However, this decision does not apply to breeding cattle and pregnant cows. Its export to third countries continues to be financially supported by Brussels. Therefore, there is a high risk of subsidy fraud that slaughter cattle are declared as breeding animals.

The conditions for sheep, pigs, cattle or goats are catastrophic: they suffer from lack of space, malnutrition, thirst and serious diseases. Many animals do not survive the cruel transport or collapse after exhaustion for days of exhaustion. These cases are very clear violations of existing EU law on the protection of animals, but only very rarely or not at all are punished.

This map should help everyone to visualize the distances the animals have to endure.

We have written about the agonizing animal transport very often, and we are not tired of doing it any further. Our constant question was and still is: Does the prescribed protection of the animals from cold, heat, thirst, hunger, illness, injury and fatigue during transport (according to Regulation (EC) 1/2005) apply at all?

This question has always been made clear but only inadequate, smart or not answered.

We have often written to the EU Commission and we have only pointed out that one must do his job properly if one is paid for it. The result is that we are the “bad guys” because we can not accept that with our moneye we pay a lot of incompetent, unwilling and lazy employees. Those who do not answer our letters, disregard our millions of petitions and put the meat, milk and transport mafia businesses above the EU Animal Laws.

The EU institution, along with all subsidiary institutions that are also responsible for the rights of animals and strive against animal transport belong to the around 50,000 people who work in the European institutions, of which around 32,000 work only for the EU Commission.

Actually, with so many people, we could start a small town where all of them would at least have a decent job, pay their taxes, and could be far more useful than they are now.