Our topic today: traps and hunters

Below are some of the hollow, de facto false arguments hunters make about traps when the public asks about it

1. Hunter’s statement: Traps are no longer allowed or used in Germany!
That’s not true!

Trapping is a completely common and widespread hunting method in Germany. However, it is hidden from the public by the hunters.

The trap is used in particular to track foxes, marten, and domestic cats. Many dogs also suffer cruel deaths in traps year after year.

2. Hunters’ statement: Only live traps are allowed in Germany.
That’s not true! 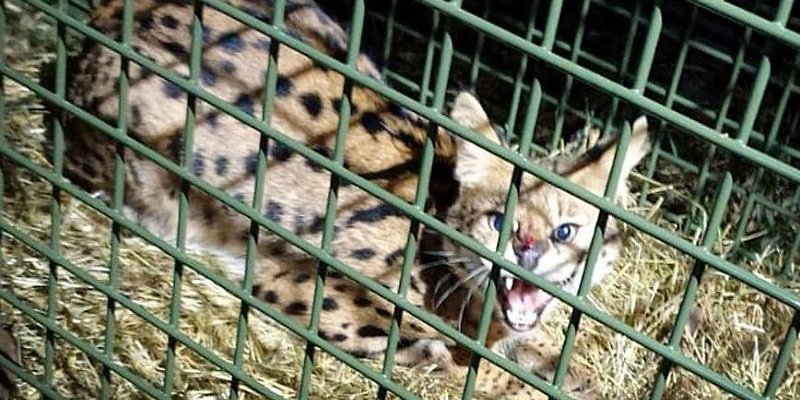 In Germany, manslaughter traps, which are supposed to kill immediately, and live traps in which the animal is caught, are allowed.

Homicide traps are supposed to kill immediately, but often don’t. Many animals die a slow and agonizing death in these traps.

Live traps: Live traps are mostly boxes made of wood or wire, into which an animal is lured using bait or fragrances, lures made by industry. According to studies, the animal panics when the trap closes – and is often seriously injured from desperate attempts to escape. Due to the panic fear of death, the animals are under high stress and often die of heart failure.

Others, severely injured, often lie hungry and thirsty for hours or days, tormented by cruel pain, and wait for death. 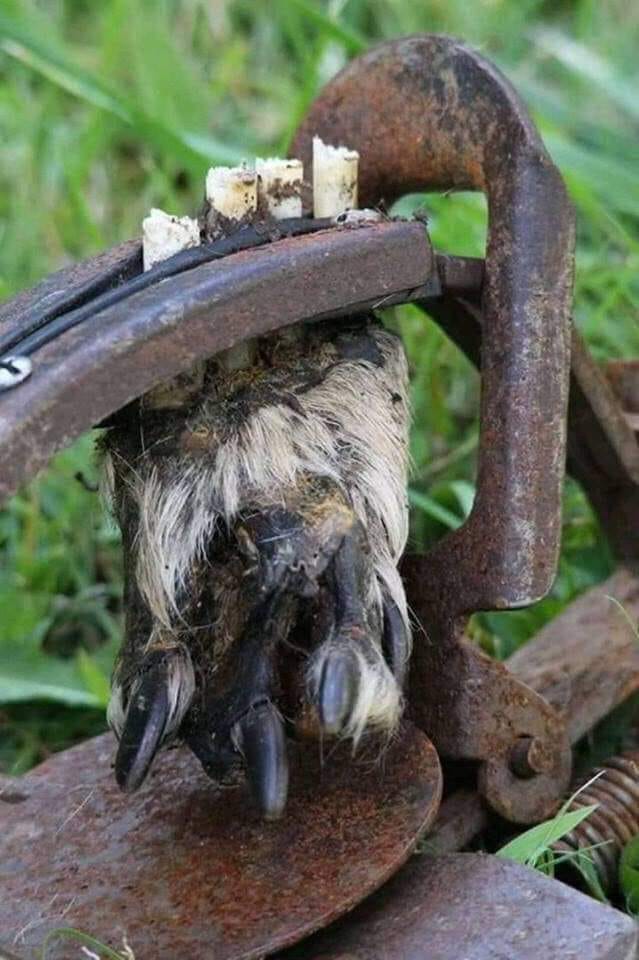 Although the law requires the traps to be checked once a day, it is reasonable to assume that this will not happen. If the traps e.g. are only checked every 2 – 3 days, this means that the animals caught in the so-called live traps slowly and painfully perish from injuries or stress.

3. Hunter’s statement: After being caught with a live trap, the animals are released back into the wild.
That’s not true!

Most of the animals are killed. The old wives’ tale of the release into the wild is told to the unsuspecting citizen in order to conceal the harsh reality in our forests. Animals caught in live traps by hunters are mostly killed. E.g. Foxes and cats.

“A powerful blow with the narrow side in the neck or over the muzzle does no less than a small-bore pistol – and works silently.” (quoted from K. Hutter, A loud word against the silent hunt)

4. Hunter statement: Traps are only somewhere in the deep, deep forest.
That’s not true! 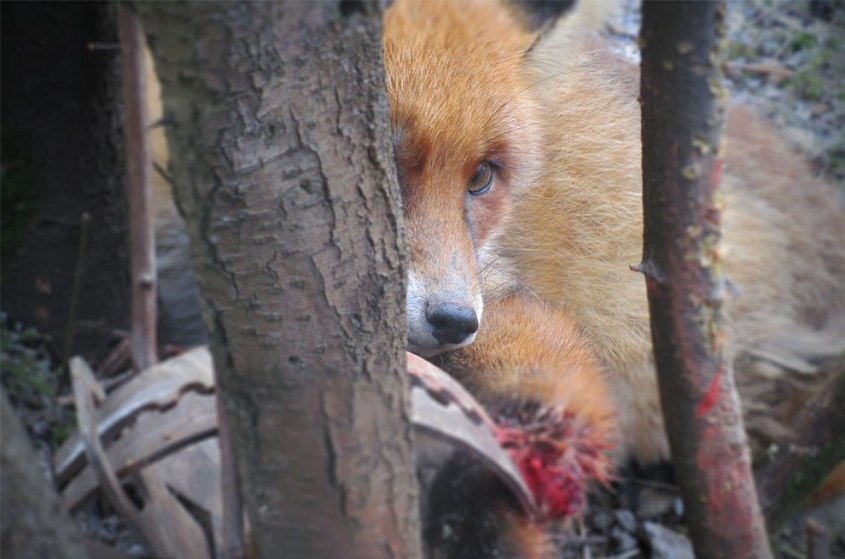 Traps can be anywhere. They are often set up near high seats or even completely normal paths, from where they can be more easily controlled.
Gardens, allotment gardens, log piles, field trees, concrete pipes in the forest (e.g. under paths), field barns, piles of straw, piles of brushwood, and fences are popular trapping sites.

The trap is covered with brushwood, litter, etc. and thus hidden from the view of the walker.
From the magazine “Hunter” (quoted from Dag Frommhold): “The pulpit (raised stand) is ideal as a distraction. The hikers’ eyes are sure to wander up to her. The nest box that hangs on the tree nearby makes the visitor friendly. So we are happy when the eyes wander upwards – because our traps are below. “

5. Hunter’s statement: Traps only selectively catch a certain species of a wild animal.
That’s not true

Animals are lured into traps with attractants! Fox attractants often work on dogs as well. Of course, animals that are similar in size to e.g. have a fox go into the trap. Foxes have no closed season in Germany. It is just not allowed to shoot suckling birds (which is all too often disregarded). Exception: adult foxes have a closed season in Berlin (but not young foxes).

6. Hunters’ statement: Traps are only set by poachers!
That’s not true!

Trapping is a common hunting method used by hunters in Germany. Any hunter who has completed an approx. 15-hour trapping course and can then present a certificate of trapping qualifications is allowed to hunt with the trap.

7. Hunter statement: Traps are secured in trapping bunkers so that only the best. Animal goes in e.g. the Fox. There is no danger to pets.
That’s not true!

There are certain rules for setting up and securing a trap. Ultimately, the decision when, where, and how a trap is set up is at the discretion of the person authorized to hunt.

Every hunter has his own practice here. In fact, control cannot take place. And securing a fox trap against e.g. Pets of the same size are not even possible.

So-called trapping gardens (the trap is only accessible on certain paths) cannot prevent pets of the same size, larger or smaller, from falling into the trap.

8. Hunter’s statement: The fox trapping is necessary because it endangers humans through the transmission of rabies and fox tapeworm.
That’s not true!

The fox tapeworm poses an extremely low risk to humans today, as does rabies.

The fox’s bad image as a carrier of rabies and fox tapeworm is, however, carefully cultivated by the hunters in order to be able to pursue the fox, which the hunters see as a prey competitor, without restriction.

Almost everywhere there is not even a closed season for foxes. From a purely legal point of view, fox mothers may not be killed as long as the survival of their young depends on it.

However, if the hunter kills the puppies first and then the mother, this is not a problem.

The mother fox can therefore be hunted even if she has young. Even in hunting circles today it is admitted that the dangers of rabies and fox tapeworm for humans are very low. In addition, it has been established by biologists that the number of offspring of foxes increases drastically when many foxes are killed by hunting, while in areas where fox hunting has stopped, the fox populations regulate themselves and rabies does not occur.

What else you should know:

Traps are baited, “for which an experienced hunter recommends irresistible weather for the fox consisting of cockchafer, a handful of earthworms and a handful of bits of cat meat with fur”.

It works with attractants that also attract pets. Valerian, fox urine, industrially manufactured attractants, e.g. for foxes, which also affect dogs
Approx. 450,000 cats and 65,000 dogs fall victim to hunters every year by being shot down or trapped!

Not only the forest is a hunting area! You can hunt almost anywhere. Even the university campus or a cemetery can become a hunting ground.

By the guns and the traps of German hunters.

The hunt led to the extermination of bears, wolves, and lynxes. The only reason for these forms of murder was and is the lust for the suffering of animals, the lust for killing.
During the Nazi rule, the majority of the hunting principles that are still valid today became the law in the “Third Reich”: selecting and killing animals that were supposedly weak or surplus animals, destroying alleged pests, … etc …

Even today, the majority of the approximately 388,500 hunters in Germany give the main reason for hunting the joy or “desire” in chasing and killing the animals, the “prey”.

Hunting serves the rule of a minority of 0,45% of the population over animals and all of nature. Hunting traditions from the Nazi era still prevail, the rich make hunting trips in the style of German colonial rulers and insult opponents of hunting with racist and sexist slogans.
And anyone who disagrees is intimidated at gunpoint.

The best hunters could do would be to shoot themselves and their stupid accomplices in politics too.