A temporary, heartwarming antidote to the seething cauldron of hatred and violence that currently envelops us. They say animals feel like we do, but that’s not entirely true.

Animals feel more intensely, more honestly, more alive than we humans.
Animals have the ability to create feelings and to convey them.
And always give us back three times more of love and loyalty.

We have a lot to learn from animals.
If we don’t close our eyes, ears, and our heart

After the scandal ruling by the Hamburg Higher Administrative Court, according to which the Hamburg animal testing laboratory is allowed to reopen the Laboratory of Pharmacology and Toxicology (LPT), Doctors Against Animal Experiments filed a criminal complaint against the LPT on suspicion of cruelty to animals.

The nationwide association wants to underline the urgency that the people responsible for the animal suffering documented on film must be brought to justice.

In October last year, covert recordings by SOKO Animal welfare from the LPT laboratory in the Lower Saxony district of Mienenbüttel brought scandalous conditions to the public: dogs lying in their own blood and monkeys writhing in primate chairs.
LPT manipulated studies.
For example, animals that have died in a series of experiments are said to have been swapped for living ones without having to properly note this or to take it into account in the further course of the study – with corresponding risks also for human health.

After the undercover investigation, the authorities withdrew the operator’s permission to keep animals because his reliability is not given –
This was done in January 2020 first at the Mienenbüttel location and in February at the headquarters in Hamburg-Neugraben.
Only the 3rd laboratory in Schleswig-Holstein remained unmolested. 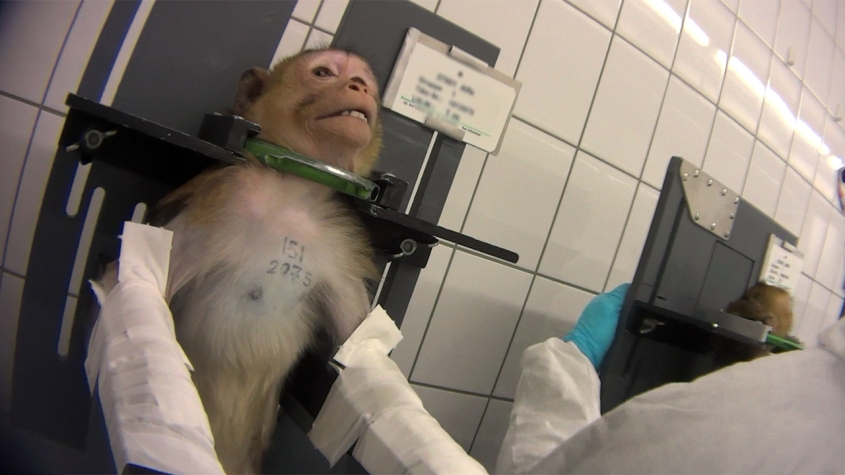 In August of this year, the Hamburg Higher Administrative Court overturned the decision of the authorities and allowed animals to be kept at the headquarters in Hamburg-Neugraben again.

In the opinion of the association, those responsible, especially the managing director Jost Leuschner, must at least be punished.
“The filmed evidence shows very clearly that the crime of cruelty to animals is present.
So the severity of the law has to take effect, otherwise, the animal welfare law degenerates into a laughing stock, ”explains Gericke.

END_OF_DOCUMENT_TOKEN_TO_BE_REPLACED

WAV Comment – Normal people understand and are not confused by the term Veggie Burger; they know it is made from vegetables. But we can understand that the EU officials may find it difficult – they seem to find everything that we take as basics hard to grasp. Thats why they are ‘officials’ we guess !

Veggie Burger – it has NO meat:

Environmental groups across Europe have hit out at an EU proposal to ban plant-based products from using terms such as “veggie burger”, saying it contradicts the bloc’s objective to encourage sustainability.

The organisations’ grievance concerns two amendments proposed by Committee on Agriculture and Rural Development (AGRI) which would restrict the naming of meat and dairy alternatives to avoid consumer confusion.

Under the measures, plant-based products would be banned from being advertised using words such as “burger”, “sausage”, “yoghurt style” and “cheese alternative”.

Critics say this will favour the meat and dairy industries and will unfairly affect the growing plant-based food sector, which provides more sustainable products.

If MEPs vote in favour of the amendments next week, they could become part of the Common Agricultural Policy that would come into effect at the start of January 2023.

In a letter sent by 13 leading environmental organisations to MEPS on 8 October, the proposals were criticised for contravening the European Green Deal, which seeks to reduce the agricultural sector’s environmental footprint.

The groups argue that the move goes in the “completely opposite direction” to scientific evidence showing the harmful effects of the meat and dairy industries, and against growing demand for plant-based products.

Marco Contiero, the EU agriculture policy director at Greenpeace who was one of the letter’s signatories, told The Independent that there was “no justification” for amendments which go against environmental, health and economic considerations.

Mr Contiero added that they constituted an “attempt to prevent a new, very important business from actually conquering the market”.

I think most ‘normal’ people understand the difference; kill or no kill.

Despite the overwhelming wishes of the Australian people to stop live exports; the government seems to ignore them and continue to bow and make excuses for support of the trade.  If I lived in Freemantle and heard this news I don’t think I would be very impressed with this situation.

Sems that the Health Minster and the WA Premier have now got a bit of a problem here.

The authorities want to ‘remove the ship so that it can be cleaned’ !

If Australia did not have the live animal export trade then there would be no (live export ship) crew infections; no risk to the people of Freemantle (Health Minister Roger Cook said authorities were working to get as many people as possible off the ship and into hotel quarantine) – so sick crew now being taken ashore into a hotel reduces the risk, does it ?

We say Karma to the government – sadly, people may die as a result of all this; livestock ship crew being taken ashore ? – increasing the chances of infection to other land based folk no doubt.  If the government has to keep on dreaming up excuses for the vile trade to continue; them let them dream up excuses for this new situation.

If the citizens of Australia don’t like it – then get them out !

You know how ‘Mr Coal’ failed you in the recent fires !

Further to our very recent post re Covid on a livestock ship docked in Freemantle:

It now seems to be getting much larger within a day – 24 crew now seem to have tested positive.

Another 24 crew members on board a livestock carrier docked at Fremantle Port in Western Australia have tested positive for coronavirus, as a move to phase 5 of eased COVID-19 restrictions has again been delayed in the state.

One crew member from the Al Messilah ship had already been diagnosed and brought onshore to quarantine in a hotel.

The other 51 crew from a number of countries remain on the ship, which was scheduled to be loading stock but has now been delayed.

Health Minister Roger Cook said authorities were working to get as many people as possible off the ship and into hotel quarantine to allow for deep cleaning of the vessel.

WA Premier Mark McGowan said it was possible there could be “further positive results in coming days”.

“It is becoming clear that ships arriving with COVID-19 on board is one of the weakest links and the biggest risk to our way of life in Western Australia,” he said.

Mr McGowan demanded the Commonwealth “step up” and work with other jurisdictions on the issue, saying WA received around 30 vessels to its ports every day.

WA’s tentative date to move to phase 5 of eased COVID-19 restrictions had been pencilled in to begin this weekend.

It would have seen the 2-square-metre-per-person rule abolished along with the 50 per cent capacity limit at major venues.

Mr McGowan said WA would extend phase 4 restrictions for now, but the 2-square-metre rule would be modified.

WARNING – click on the link below to see the reality of this industry.  This is

why your action is needed NOW !

A few minutes of your time, may help save a life!

“The greatness of a nation and its moral progress can be judged by the way its animals are treated.”

Please help save millions of Korean animals from horrific cruelty by taking this action today.  Click below Take Action buttons to file e-People petitions for each cities in South Korea.

Then you will see a large table – on the right side in RED is the call for action.

Where it says ‘Click’ on the right side you can do just that – you will then be taken to a further page giving you actions you can take info on the specific region / dog farm you have selected.  There are ghastly videos; local government contact e mails to write to, as well as a sample letter for you to copy and send (to the contact address list given).

There are many action links – about 290 to be precise; so please add this to your favourites and return to it to take more action when you have time.

Despite the fact that dog and cat meat consumption is an everyday occurrence and is being carried out all over South Korea, it is NOT LEGAL in that country.

Their Government does nothing to stop this illegal practice and they seem happy to ignore it; many Korean citizens are just as apathetic and must also be held accountable.

This is the 21st Century, and it is high time that all South Koreans, leaders and general public alike, stand up and take responsibility to enforce their own country’s laws. South Korea and South Koreans cannot continue to ignore these brutal and unethical trades, so let us campaign to urge each of South Korea’s cities to enforce their laws and to put an immediate end to these illegal dog and cat meat trades.

Below are the most populous cities in South Korea. Please sign our petitions and send postal letters to these cities calling for an end to these illegal trades. Postal addresses for the Mayors are shown in the change.org petition. You can use our petition as sample letter (just copy and paste) or use your own words.

Please note: We will be adding more petitions so please check back with us often. Thank you!

Please help us to help the wonderful South Korean activists with their massive campaign to shut down the dog meat in South Korea.

Here are a few different sites – each with many animal welfare petitions.

Due to the huge amount, we (WAV) cannot provide individual links.  So ….

…… Please scroll through the links below and give your support to the petitions on them as you desire.