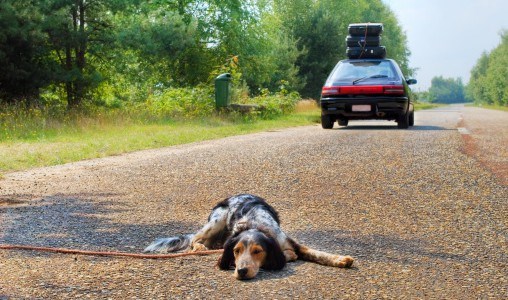 Whoever leaves his dog is and remains shit.
Human garbage without empathy that just takes up space in this world
It is treason to abandon your best friend
It’s treason and we despise traitors.

Nearly every wolf in the lower 48 just lost its Endangered Species Act protection.

Their survival is now at stake.

We’ll be in court as soon as possible to fight this disastrous move. Please make an emergency gift now to the Saving Life on Earth Fund. All gifts will be matched.

It’s now up to states to decide what happens to these beautiful, family-oriented animals.

That’s why we’ll be leveraging the full power of our grassroots activists to shut down plans to hunt, trap or poison wolves state after state.

In the few places where wolves exist today — like the northern Rocky Mountains, Great Lakes states and West Coast — they face persecution.

Washington state has wiped out entire packs for conflicts with livestock, mostly by gunning wolves down one by one from a helicopter.

In Wisconsin a law is already on the books requiring trophy hunts of wolves.

Idaho has for years expanded its hunting and trapping seasons on wolves — it even contributes to bounties to kill them.

In Montana it costs $19 to kill a wolf. And anti-wolf forces there have tried to make it cheaper.

Wolves are irreplaceable — and we will fight like hell to protect them against this horrible move.

More than four decades of work to save these magnificent creatures just came to a screeching, bloody halt.

We knew this day was coming, which is why we’re ready to challenge this in court as quickly as possible.

We can’t let anti-wildlife forces doom this keystone species to being shot, trapped or poisoned, state by state, wolf by wolf.

Our team is ready for this fight. But we need you, too.

Please give now to our Saving Life on Earth Fund.

END_OF_DOCUMENT_TOKEN_TO_BE_REPLACED

SYDNEY (Reuters) – Australian scientists found a detached coral reef on the Great Barrier Reef that exceeds the height of the Empire State Building and the Eiffel Tower, the Schmidt Ocean Institute said this week, the first such discovery in over 100 years.

The “blade-like” reef is nearly 500 meters tall and 1.5 kilometers wide, said the institute founded by ex-Google boss Eric Schmidt and his wife Wendy.

It lies 40 meters below the ocean surface and about six kilometers from the edge of the Great Barrier Reef.

A team of scientists from James Cook University, led by Dr. Robin Beaman, were mapping the northern seafloor of the Great Barrier Reef onboard the institute’s research vessel Falkor, when they found the reef on Oct. 20.

“We are surprised and elated by what we have found,” said Beaman.

He said it was the first detached reef of that size to be discovered in over 120 years and that it was thriving with a “blizzard of fish” in a healthy ecosystem.

The discovery comes after a study earlier this month found the Great Barrier Reef had lost more than half its coral in the last three decades.

END_OF_DOCUMENT_TOKEN_TO_BE_REPLACED

New analysis from The Guardian has found that live export ships are twice as likely to be lost at sea as cargo vessels.

“It is clear that the live export trade places the lives of animals and humans at an unacceptable risk,” said Atlas

Livestock carrier Yangtze Fortune is expected to arrive at Napier Port on Wednesday 4 November. This is will be the first export of live animals since the sinking of Gulf Livestock 1 in September.

The Yangtze Fortune’s arrival next week is estimated and subject to change, but the animal rights organisation SAFE will be protesting regardless.

“It’s only been two months since we lost 5,867 cows and 2 of our own people in the Gulf Livestock 1 tragedy and now we have another ship leaving from that same Port,” said Atlas.

“The reality is, all of these animals, who are exported for breeding purposes, will eventually be slaughtered in their destination country, potentially by methods outlawed in New Zealand.”

“Ending live export should be at the top of Jacinda Ardern’s agenda when she forms her new cabinet.”

Above – Carcasses line a beach after a livestock carrier loaded with 5,000 cows capsized at Vila do Conde port in northern Brazil in 2015. Photograph: Reuters

Exclusive: livestock ships twice as likely to be lost as cargo vessels

Ships carrying live animals are at least twice as likely to suffer a “total loss” from sinking or grounding as standard cargo vessels, the Guardian has found.

In the past year alone there have been two disasters involving animals in transit. Last November, at least 14,000 sheep drowned after the Queen Hind capsized en route to Saudi Arabia from Romania. And last month, Gulf Livestock 1, a carrier transporting almost 6,000 cattle, sank off the Japanese coast en route to China from New Zealand. Forty crew members remain missing and are presumed dead.

“With the Guardian’s shocking findings … [it’s] time for an open and honest assessment of an industry that has caused one crisis after another,” said Prof Kristen Stilt, director of Harvard’s animal law & policy program, currently writing a book about the transport of live animals. “That assessment should recognise that the transport of chilled and frozen meat is the way that nearly all meat travels in commerce today. The idea of sending live animals is a holdover from a bygone era.”

The global live export trade is worth nearly £16bn. For decades, campaigners have been calling on the EU to provide better protections for animals in transit, and an inquiry into the regulatory system is under way.

According to Guardian analysis, between January 2010 and December 2019 five livestock vessels were recorded as lost to sinking or irrevocable grounding, killing crew and animals. The total equates to just over 3% of the estimated 150 livestock carriers above 100 gross tonnes (GT) known to operate worldwide. The 100 GT measurement is used by the shipping industry to separate smaller vessels, often owned for pleasure, from larger, more probably commercial, ones.

The same loss calculation for the global cargo fleet of about 61,000 ships over 100 GT, shows that 471 vessels within that tonnage (excluding tugs, dredgers, fishing and passenger vessels), were lost to sinking or grounding in the same period – or less than 1%.

The Guardian’s risk calculations are based on historical data from insurer Allianz Global Corporate and Specialty’s Safety and Shipping Review 2020, analyst IHS Markit and the International Maritime Organization.

If the loss figure for livestock vessels expands to include two more vessels, sunk in December 2009 and September 2020, just outside the 10 years covered by the Allianz shipping safety report, used as a basis for the calculation, then the figure rises to 4.7%.

Tutorial: How to change the tires of a hunter’s car!!

And if the cell phone has no reception up there… bad luck for the animal lover!!

By the way: the tires on my car were also slit in one night.
But that wasn’t the ALF!
I live among farmers, hunters, farm owners … it couldn’t have turned out otherwise, I disturb all professional groups that have to do with animal cruelty, animal exploitation, and animal murder.

Thanks to the brave activists!