In addition, the EU wants to allow the feeding of insect meal.

The Greens and the Left had raised an objection to the Commission proposal. Social democrats and right-wing nationalists supported this.

The ÖVP (Austrian People’s Party)–MEP Alexander Bernhuber spoke of an important milestone in the feeding of farm animals after the committee vote.
“The use of processed animal protein from pigs in poultry feed and poultry in feeding pigs is an economically sensible measure to increase productivity in food production. The corresponding adaptation of the legal framework must be based on the state of the art, and I therefore support that Project of the EU Commission “, quoted the press service aiz.info

The politician recalled the BSE crisis 20 years ago, triggered by the incorrect use of animal meal. With a strict ban in all areas, politicians quickly made the right decisions. “But now we have come to a point where we have to think about a meaningful use again,” explains Bernhuber.

The planned new approval of processed insect proteins plays an elementary role here.
“In the future, insect proteins can be important sources of energy in animal nutrition. It was now right to set an example, although any approvals must undoubtedly be accompanied by positive scientific safety assessments,” says the MEP and calls for sufficient funds for research and development in this area also on the part of the EU.

The opposition of the Greens and Left caused trouble. They are accused of a number of shortcomings:
“The greens and left are ignoring the scientific assessment of the European agency EFSA. They use wrong definitions and come to absurd conclusions, ” said a member of the Environment Committee.

Feeding animal proteins will be in line with the Green Deal.
PAP (processed animal protein), which is left over from the slaughter of animals, is burned or exported to other EU countries. Soy is imported from overseas to meet the protein needs of pigs and poultry.

“While the valuable animal proteins are being exported, we import tons of soy. That cannot be in the sense of a sustainable circular economy ”, so the Environment Committee.

The Environment Committee does not consider the argument that the cattle feed could be contaminated and thus lead to a renewed outbreak of BSE to be valid. “We only allow pigs to be fed to poultry and poultry to pigs. But BSE is a pure ruminant disease ”!

The European food safety authority (EFSA) also sees no risk to human or animal health in the event of a re-authorization.

Of course, the European food safety authority sees no risk for a new pandemic in this shitty concept.

And above all, none of these highly paid “experts” comes up with the idea of getting out of factory farming and preferring to advertise a diet without animals and their products 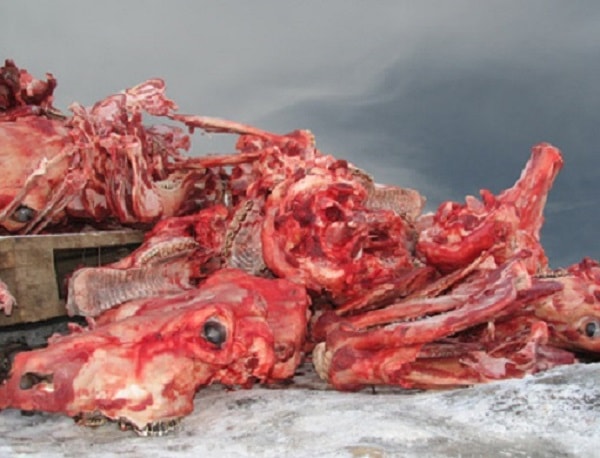 Apparently the Commission thinks it is more nutritious that meat eaters not only eat corpses, but corpses that have been fed corpse powder!