The Ringling Brothers Circus was founded in the USA in 1884 as a family-run circus.
In 1909 the seven brothers bought another circus and the two companies eventually merged to form the Ringling Bros and Barnum & Bailey Circus.

Ringling Bros. and Barnum & Bailey Circus was long considered the largest American circus.
Again and again, the company was in the public eye for cruelty to animals – among other things, a former elephant trainer disclosed grievances.
At the beginning of 2016, the circus company announced that it would discontinue elephant training from May of the same year.
In May 2017, the circus finally gave up operations completely.

In November 2011, it was announced that the parent company of Ringling Bros. and Barnum & Bailey Circus had to pay a record $ 270,000 fine for a number of alleged animal welfare violations.

PETA USA has been denouncing the grievances at Ringling Bros. and Barnum & Bailey for over 30 years and has also released video recordings showing elephants being beaten by circus employees.
The list of the sometimes serious grievances is long, the circus has repeatedly violated the American animal welfare law, and deaths and outbreaks of animals for which the US circus company was responsible were not uncommon.

Animal suffering at Ringling: animal trainer reports of diseases and cruelty to animals

Recordings from 2009 show how circus trainers from Ringling Bros. and Barnum & Bailey force baby elephants to do tricks – and not through rewards, as is usually claimed: For example, very young baby elephants with elephant hooks were forced to climb onto a pedestal while they were on Ropes were tied down – in some cases electricity was even used.

If no dressage took place, some of the animal children were forced to spend around 23 hours chained on a bare concrete floor.

In the US circus even elephants weighing around 4,000 kilograms were made to sit down or even do a headstand.
In order for the elephants to perform these “feats” on command, trainers break the will of these animals when they are still vulnerable young animals that should actually be with their mother.

Former elephant trainer Sam Haddock, who repeatedly worked for the company between 1997 and 2005, made serious allegations against the circus.
He himself trained baby elephants for the circus and later regretted this decision badly.
The elephant keeper provided the unpublished images to PETA USA to educate the public about the suffering of the animals and to help the elephants.

In the 1970s, Sam Haddock began his circus career with Ringling as an elephant trainer; In 1978 he left the circus and a few weeks later he was diagnosed with active tuberculosis.
He believed that he had contracted the potentially fatal disease in the elephants as they had to be treated for tuberculosis.
Even more than 30 years later, the elephants at Ringling still contracted the disease and died from it.

When Haddock contacted PETA USA, he described the violence and unimaginable atrocities inflicted on the baby elephants there.
He said he had shocking pictures that would prove all of this. Shortly after Haddock provided the pictures and a detailed explanation of the elephants’ “training methods”, he died of complications from cancer.

Deaths at the Ringling Brothers Circus

Between 1992 and 2016, Ringling Bros. and Barnum & Bailey suffered numerous deaths: Several elephants had to be euthanized because of osteoarthritis, which is a result of improper exercise, and other health problems.
Many more animals died, also due to negligence of the circus staff. Here are just a few examples:

Elephants: In 1998, a three-year-old baby elephant named Kenny was forced to appear in shows despite showing clear signs of illness.
Kenny hadn’t eaten or drunk anything and was bleeding from his rectum … had problems standing, was wobbly on his feet, walked very slowly.
The recording from 11:30 p.m. reads: “The elephant was dead.”

In 1999, the four-year-old baby elephant Benjamin died, who was separated from his mother at the age of one.
Benjamin drowned trying to escape the trainer who stabbed him with an elephant hook.
Between 1999 and 2003, six Aiatic elephants were also euthanized because of osteoarthritis.

In the summer of 2004, the only eight-month-old elephant boy Riccardo was killed after suffering severe and irreparable fractures in both hind legs when he fell from a circus podium.

Tiger: A Ringling trainer shot the Bengal tiger Arnie five times in 1998 while he was locked in his cage.
The trainer killed the animal in revenge for attacking the animal trainer’s brother during a photo shoot.

In 2000 a tiger was put to sleep because of degenerative osteoarthritis.
Leo: A former lion trainer said that in 2004, two-year-old lion Clyde died of extreme heat while driving through the Mojave Desert in a poorly ventilated transport vehicle. Presumably the animal died of a heart attack or of dehydration.

Sea lion: In 1998 the 12-year-old, wild-caught sea lion Gypsy was found dead in its transport container – in the wild, sea lions can live up to 20 years.

Zebra: In 2010 the Zebra Lima broke out of the circus and ran through Atlanta for over 40 minutes. The animal had to be euthanized because of the injuries it suffered while fleeing.
Horse: A horse collapsed and died during an animal march in Norfolk, Virginia in February 1999.
Although the animals were supposed to be provided with veterinary care 24 hours a day, no one was on duty when the horse needed urgent medical attention.

According to the autopsy, Ringling knew about the poor condition of the animal and still took it with him to the move.

The end of the Ringling Bros. and Barnum & Bailey Circus

In 2017, the Ringling Bros. and Barnum & Bailey Circus announced that they would be giving up operations after 146 years.
The operating company named the reasons for declining visitor numbers and high costs.
PETA USA had worked relentlessly for more than three decades through demonstrations, campaigns, reporting to authorities, celebrity support and more to achieve this groundbreaking victory.
The closure of Ringling is an affirmation that we can resolutely make meaningful progress for animals.

The end of the Ringling Bros. and Barnum & Bailey Circus

In 2017, the Ringling Bros. and Barnum & Bailey Circus announced that they would be giving up operations after 146 years.
The operating company named the reasons for declining visitor numbers and high costs.
PETA USA had worked relentlessly for more than three decades through demonstrations, campaigns, reporting to authorities, celebrity support and more to achieve this groundbreaking victory.
The closure of Ringling is an affirmation that we can resolutely make meaningful progress for animals.

Unfortunately, the end of the circus did not mean a happy ending for all animals: The big cat tamer Alexander Lacey wanted to move back to Germany. 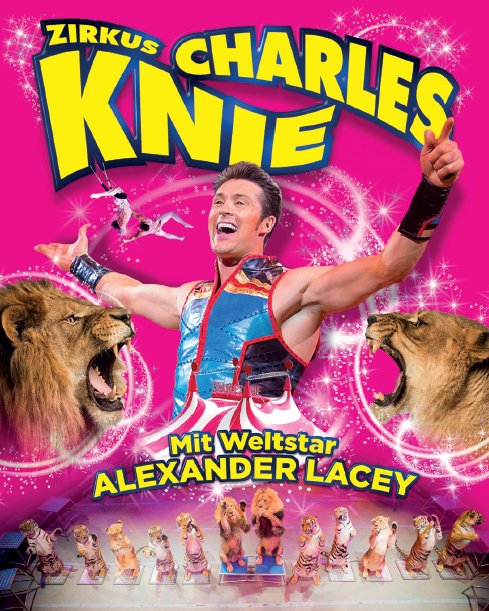 The animals – including eight tigers, six lions and a leopard – were supposed to perform at the Charles Knie circus and in the Heilbronn Christmas circus (Germany) .

In September 2017, however, while the big cats were being transported within the USA, the six-year-old tiger lady Suzy escaped from a truck and was then shot.

The days of circuses with elephants, big cats and other animals are numbered, people don’t want to go to a circus where animals are tortured
In 2009, for example, PETA, together with numerous supporters, was able to get the Ringling Circus to cancel its tour of Germany and not perform as planned in Bremen, Leipzig, Frankfurt and Oberhausen.

And I mean…So behind the scenes, animal abuse continues.
Only in another country.
And Germany is the ideal place for the wild animal tormentor -“trainer” Lacey- to work on animals with intimidation, fear and violence.
He continues to chase tigers and lions through the arena with the whip, because Germany has no intention of making such criminals unemployed and banning wild animals in the circus.
But it should also be clear to every circus visitor that with his ticket finances an animal life with whip, isolation, torture and humiliation.

In spring 2018, Lacey was attacked by a lioness during the show in Stendal (Germany) and injured so badly that he had to spend several days in the hospital.

Unfortunately he did not die like most of his victims.