Part of a changing, forward-looking society is to question and discard outdated and bad traditions.

These 10 animal torment events around the world must be stopped immediately.

In the small Spanish town of Medinaceli, torches prepared with black pitch are tied to the horns of a bull once a year in November for the “Toro Júbilo Festival”.
Then the bull’s head is lit on the horns.

With the burning flames on his head, which sear hair and skin, the organizers drive the suffering, panicked bull through the narrow streets.

Sometimes the so-called fire bulls burn for hours and, in unsuccessful attempts to extinguish the flames, run their heads against stone walls and lamp posts.

A sticky black substance made of tar or turpentine is placed over a bull’s head and set on fire before it is chased into the street.

Despite the pandemic, which can be traced back to the unsanitary and cruel conditions in live animal markets, the infamous dog meat festival was held again in Yulin, China, in 2021.

Thousands of dogs are brutally killed at the festival in order to sell their meat and make leather from the animal skins.
The dogs are kept in tiny wire cages before being either cremated alive or killed with bludgeoning on the head between July 21st and 30th.

The suffering dogs do not always die directly, some animals experience their throats being cut when they are fully conscious.

Products made from dog leather, which comes from the cruel Yulin Festival, among other things, are exported all over the world.
It is often not clear which species of clothing and other articles of daily use made of leather are.
The only way to avoid animal suffering is to use leather alternatives that are free from animal suffering.

The dogs are killed and made into food or leather.

EEvery five years at the Gadhimai Festival in southern Nepal, up to 200,000 water buffalo, pigs, sheep, donkeys and goats are rounded up in a sacrificial rite for the Indian deity of the same.

The animals are already suffering from the sometimes hundreds of kilometers of transport under miserable conditions.
In the town of Bariyarpur, thousands of believers then kill the animals with knives and swords; often the animals are beheaded and chopped into pieces.

Although a temple committee decided against further animal sacrifices in 2015 and the Indian government officially banned animal transports to the festival, numerous animals were again cruelly killed in 2019.

The animals are forcibly slaughtered for “religious” reasons.

In some western German regions such as Solingen, roosters are killed for fun at folk festivals.
When the rooster is headed, the head of a previously killed rooster that hangs upside down in a basket should be cut off with a sword at fair fairs, thanksgiving and October festivals.
The participants in this cruel “tradition”, for which an animal is killed just for fun, wear a blindfold.

The killing of animals with the main motive, to use their bodies for a supposedly entertaining fair event, violates the Animal Welfare Act and is illegal, which is why we at PETA Germany filed a complaint. 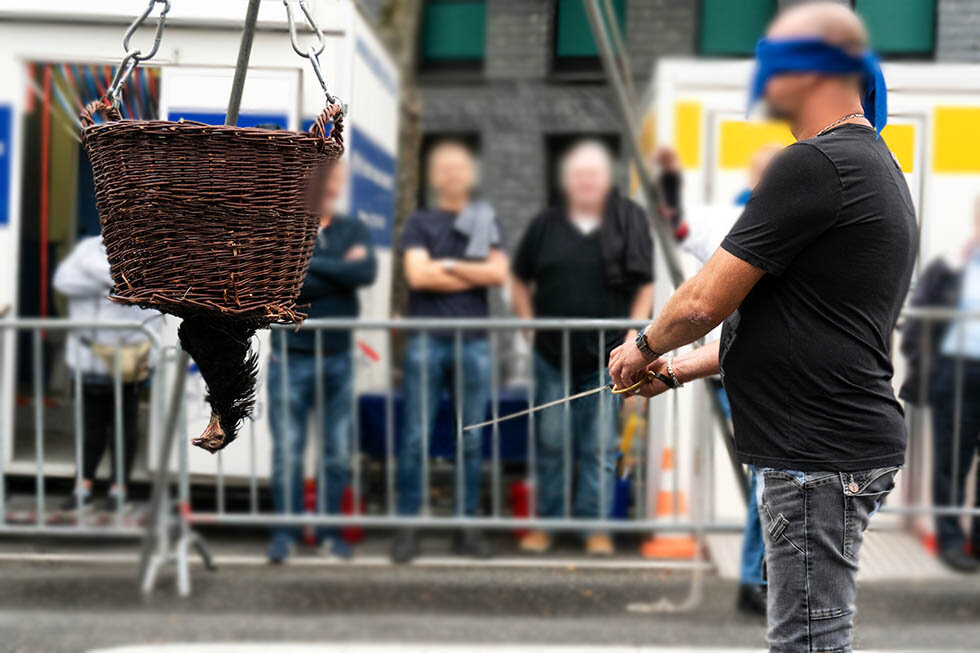 Blindfolded attempts are made to cut off the heads of killed roosters.

Although whaling is banned in most of the world, the Faroe Islands hold on to the bloody tradition.
Every year whalers drive hundreds of (actually strictly protected) pilot whales, dolphins, and porpoises into designated bays off the waters of the Danish archipelago.

In the course of the driven hunt, the panicked animals either run aground by themselves – but mostly workers ram the animals from boats with hooks into the blow holes and drag them to the beach with ropes.

On land, the animals are cut open and bleed to death in agony, sometimes lasting several minutes.

The local fishermen take boats to the whale schools that are passing by the coast and drive the animals into the bay until they are stranded.

Buzkashi, also known as Kok Boru in Kyrgyzstan, is a national sport in many parts of Central Asia.
In the horse tournament, which is similar to polo, the exclusively male participants fight for a goat carcass weighing around 50 kilograms – in other regions calves are also beheaded before the game and deposited in the steppe.

The 20 or so participants ride on specially trained horses.
The aim of the “game” is to pick up the dead goat’s body at a gallop, hold the body as long as possible and throw it into an area marked with chalk.

In addition to the unnecessary death of the goat, which is misused as a “plaything”, the spectacle is extremely dangerous for both the participating men and the horses involved: For example, when riders steer the stressed horses into each other, push them with hard strokes and serious falls .

The Memmingen fishing day takes place every year at the beginning of the summer holidays.
The pure betting event is all about catching the heaviest trout within 30 minutes.
For the fish being dragged out of the water, the supposed folk festival means agonies of death: it has been documented several times how the sentient animals twitch in pain while their organs are removed and they are tortured to be killed.

Numerous legal requirements are also deliberately ignored: The queues in front of the killing tent are often so long that the fish are not killed within the club’s 30-minute requirements.

To protect the animals, the Memmingen fishing day is finally banned.

The trout are housed in buckets filled with more or less water and brought to so-called slaughter tents.

8. Bull hunting at the San Fermín festival in Pamplona, Spain

The cruel bull race takes place once a year in Pamplona, Spain.
In the run-up to the festival, young bulls with so far little contact with humans are crammed into small, dark crates for days. Then a loud, chaotic crowd drives the completely confused and frightened animals through the narrow streets of the city.
Often the bulls crash into walls, slip on the slippery ground and break their bones.

Many people are unaware that the bulls that are herded through the streets during the San Fermín festival are subsequently tortured to death in bloody bullfights.

At least 48 bulls are barbarically stabbed to death during the festival.

The historic pageant of the Krakelingen Festival in Belgium is supposed to herald the end of winter on the last Sunday in February every year.

At the spring festival in Geraardsbergen near Brussels, however, animals are tortured: the locals drink live fish marinated in wine from a jug.
Often the animals wriggle in the mouth of the festival-goers: inside before they die an agonizing death.
As early as the 1990s, a court ruled that the “ritual” violated animal welfare, as the fish in red wine suffer internal injuries.
Nevertheless, animal cruelty continues unabated year after year and was even declared a World Heritage Site in 2010.

Although the killing of a living being is not a festival, there are numerous so-called slaughter festivals in Germany where animals are killed, cut up and eaten as a ceremony.
The animals that are killed at such festivals – mostly in the context of club events – have often had a hard and hard life in the animal industry behind them and were born for the sole purpose of being killed and eaten.
Even animals from organic farming do not really have a better life – meat always costs life.

This is how you become active for the animals
Help put an end to cruel customs practiced in the name of questionable “traditions”: By writing letters to the editor and commenting on social media, you can already make a difference.

And I mean:The life of animals has always been determined by humans, we just assume that they should fulfill a function, should serve us where and when we want it.
Tradition with animal sacrifice is nothing other than a society’s basic right to cruelty to animals.

But as soon as you turn the victim group into people, the identical procedure is bestial, disgusting, extremely despicable and of course punishable because people have rights and therefore human sacrifices are forbidden

Animal rituals in the name of tradition violates all ethics of modern civilized societies and it is high time that such primitive festivals and rituals must be abolished!

They have nothing to do with culture or tradition; they are just a kind of cruelty to animals.