In a press release, Human Society International (HSI) announced the city council of Seongnam, where Taepyeong is located, intended to build a community park where the slaughterhouse once stood, „creating a fun public space where once hundreds of thousands of dogs a year were gathered from the country’s thousands of dog meat farms to be killed by electrocution.“

Taepyeong, which supplied dog meat to restaurants and markets throughout the country, is made of six individual slaughterhouses.

HSI said five of the six Taepyeong-Dong slaughterhouses- complex would be bulldozed immediately.

Over 2 million dogs are brutally killed every year in South Korea in about 17,000 slaughterhouses . That’s more than 5000 dogs a day. In the opinion of the South Koreans, the meat would taste even better, if one torments the dogs in addition to death. Therefore, they are killed by electric shocks, strangulation, beatings and other brutal ways. Not only electric shocks are used, but also the cruel way of killing is to throw the live animals into the seething water.

After closure, members of the Humane Society International visited the slaughterhouse and described the conditions within the complex as “terrible.” They found a large number of empty cages in which hundreds of dogs had once been kept, as well as the equipment for electric shocks, knives and a depilation machine. 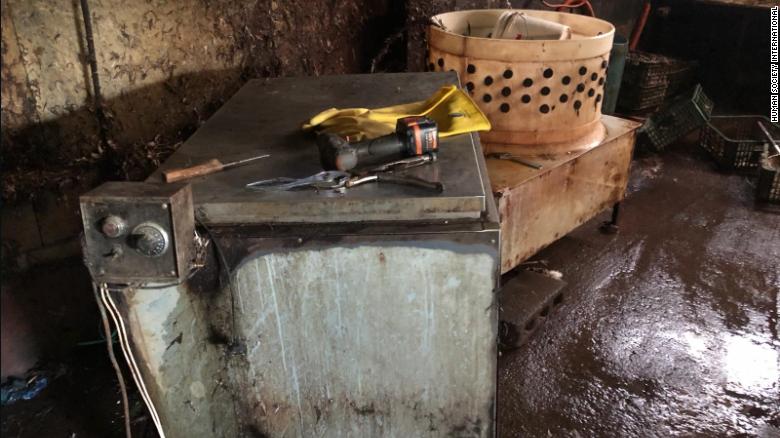 The Korean Animal Protection Group called it a “historic victory”. A blog post states: “It will open the door to further closures of dog meat slaughterhouses across the country, which will accelerate the demise of the entire dog meat industry. “

It is true that dog meat eating is part of Asian tradition or culture. This does not excuse the continuation of such practices. While the Philippines and Thailand have banned dog meat consumption, there are other countries besides Korea that continue to openly engage in this practice, such as: China, Vietnam and Indonesia. If more countries could be encouraged to ban the food of cats and dogs, this could also ban neighboring states. That’s why it’s so important that the Korean government has closed the largest slaughterhouse for dogs.

My comment: At some point, after a hundred years maybe, the children of our children will visit all slaughterhouses in the world.
Just as we visit Dachau today, and learn how innocent people in the Nazi era like the animals today were treated, tortured, and murdered.
Such places must visit our descendants, so that they learn that fascism, in any form and against any life beings must not be practiced.