For over 13 years we have seen exactly the same policy in Serbia, Europe.

Corruption amongst politicians (the attitude ‘making money is most important to me’ !) and municipalities failing to act, has led to Serbia NOT introducing a strategy to control and reduce its stray animal numbers, despite attempts by welfare organisations to encourage this.

We documented it all, including photos, on our sister site ‘Serbian Animals Voice’.

You can visit the site at :

When will these nations learn about stray animal control procedures ?

Many have now left it too late – they should have acted years ago, and are now witnessing the results of their inactions.  Until they introduce national sterilisation programmes for strays then the problem will never go away – in fat, it will get increasingly worse.  – WAV

The situation of stray dogs and cats in Egypt is dramatic. There are over 22 million stray dogs according to statistics of a recent study.

Local communities are frustrated because around 1.3 million people have been bitten by stray dogs and some have even died. On the one hand, we must admit that the danger exists and it is urgent to halt the free roaming dog population growth.

However, on the other hand, this massacre is inexcusable. The issue should be addressed through the implementation of catch/neuter/vaccinate/release programs. CNVR is the only effective and at the same time humane solution to the stray dogs problem. Such interventions should be ideally carried out by the country institutions in collaboration  with NGOs and other local animal rights associations.

The latest tragic news dates back to only a few days ago, when thousands of street dogs and cats have been found hanged up in the town of Giza, the famous touristic site close to the pyramids. These cruel acts shocked not only animal lovers but also the whole community. 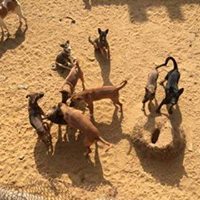 Last year instead stray dogs and cats were poisoned with strychnine. The poison was thrown into rivers and dogs were shot dead or left to rot in the streets. Animal rights groups have reported the illegal import of this alkaloid that can be fatal to humans and other animals and poses also highly toxic environmental risks.

Furthermore, back in November 2018, Egypt planned to export abroad over 4000 stray dogs and cats for their meat to be slaughtered and eaten even regardless of the risk of infections transmission to humans, such as rabies virus.

Fortunately, stray cats and dogs are lovely and tenaciously protected by many animal welfare associations against the abuses perpetrated by Egyptian authorities that, without further ado, should engage in the planning and implementation of humane dog population control programs.

Among these associations, OIPA member league “Touch of Life Organization”  provided us with important information and stated the following: “We are trying to educate the people and especially children to love and respect animals, however it will take a long time to solve the problem….in some areas the government started to do Trap-Neuter-Return campaigns with veterinary help”