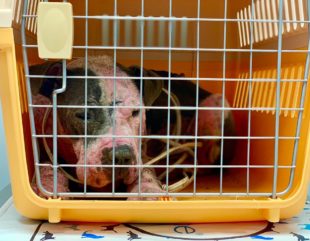 Goal: Punish the people who beat, strangled, and spray painted a dog.

A dog suffered life-threatening injuries after she was beaten and strangled with an electrical cord. A second dog was found dead nearby. Demand justice for this innocent animal.

“She had clearly been beaten and spray painted and had a lot of injuries,” stated Ellie Roberto, director of The Animal Hope and Wellness Foundation. The organization was called to an alley, where Avery, a pit bull, had been tied to fence with an electrical cord. She suffered lacerations to her neck and some damage to her esophagus, indications of hanging, and appeared severely emaciated. Veterinarians found a hole in one of her paws and her eyes had chemical burns from an unknown substance.

Avery suffered seizures, due to the lack of oxygen to her brain, but she is expected to recover. Police believe that she, and the deceased dog, were used in a gang initiation. They have no suspects at this time. Sign below to demand that the people responsible for this cruelty are prosecuted and assigned the maximum penalty possible.

A dog was beaten and strangled in a horrific case of animal cruelty. Police believe that she was used in a gang initiation. I demand justice for this poor pup.

The Los Angeles Police Department is investigating after a dog was found tied to a fence with an electrical cord. The pit bull, named Avery, had multiple lacerations on her neck and she suffered seizures due to a lack of oxygen to her brain. A veterinary exam revealed chemical burns to both of her eyes and a hole in one of her paws. A second deceased dog was also found nearby. The Animal Hope and Wellness Foundation took custody of Avery and she is recovering. The police have no suspects at this time.

Anyone who would torture an animal is dangerous and they must be punished. I demand that you prosecute the people responsible for this cruelty and seek the maximum penalty in this case.