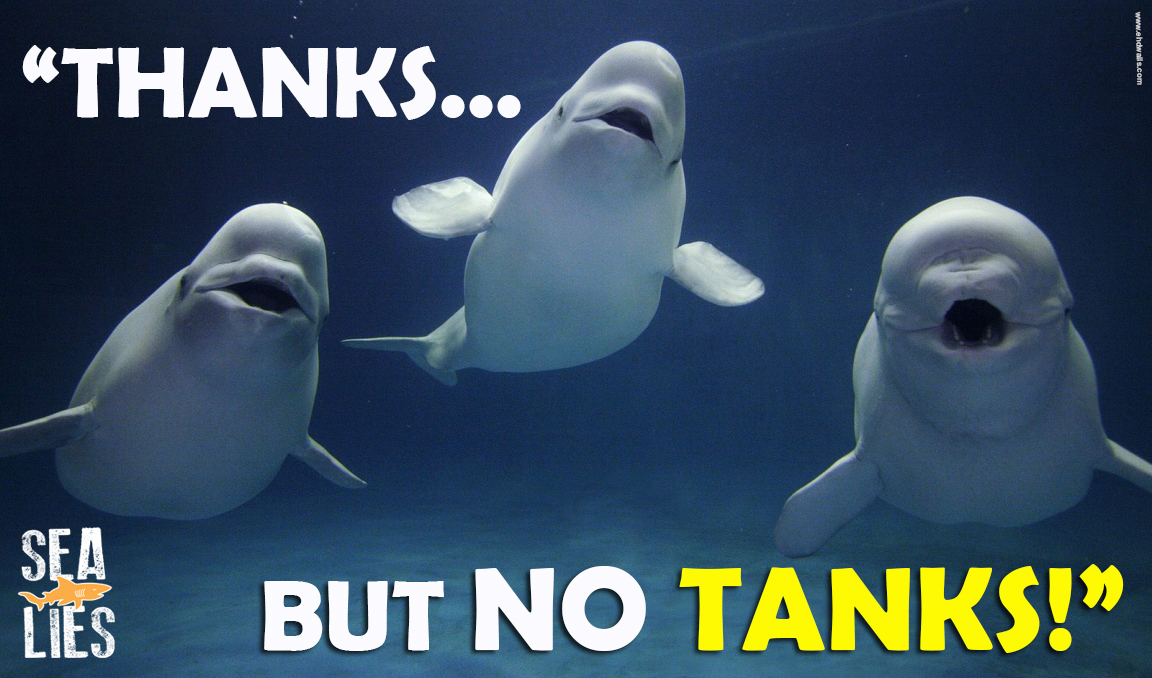 I am so overjoyed to share this news with you. Finally, after years of being put on display in front of crowds, being made to do tricks, two beluga whales held captive by SEA LIFE have been forced to perform for the very last time.

When I heard the news I was overcome with emotion. Alongside you and other animal advocates, we have campaigned hard for the freedom of these whales for a long time. And now their days of exploitation in shows have actually come to an end. It’s almost hard to believe.

But it’s true. And it’s all thanks to you.

SEA LIFE and parent company Merlin Entertainments gave into pressure and last year announced they would be retiring the whales to a sanctuary in Iceland.

And they will be going there this month!

This victory goes beyond these two whales. It is yet another blow to the captivity industry which exploits whales and dolphins for entertainment. It is a step closer to a future where all animals are free from exploitation.

We will be monitoring the move to the sanctuary, which will be a long  journey for the whales from China to Iceland. We will post updates on our social media so please do keep an eye out there! www.facebook.com/freedomforanimals

Thank you for everything you have done to make this happen! Will you now join us today to fight for the freedom of all animals exploited in captivity?

Get involved in Zoo Awareness Weekend 2019

A great way to help other animals held captive is to join our annual Zoo Awareness event! This takes place over Easter weekend. To speak out for animals you could:

Volunteer on a street collection to raise funds

Whatever you do for animals, it is clear that when we work together we can win! And animals can be given a second chance! So let’s use this fantastic news about the belugas and keep fighting for other animals in need.

P.S. Thank you for all you have done to free whales like Little White and Little Grey from captivity. You are giving them a second chance at life!

In the spring of 2018, a farmer from the Gifhorn district in Lower Saxony, (Germany) killed twelve fawns, during mowing. The public prosecutor’s office had charged him with 13 reasons for killing of vertebrate for no good reason. Now he was sentenced by the district court Celle to a fine.

As the “Cellesche” Newspaper reports, the man had run over the animals while mowing, as he did not scare off the game from the meadows before, as it was supposed to.

The man drove with a tractor and a rotary mower without consideration over several meadows. He was, according to the prosecution, aware that could be on the meadows fawns. He continued mowing after noticing the injury or killing of the first fawns.

He did not care about the suffering of the animals, the “Cellesche” Newspaper quotes the indictment.

It was mowing for biogas plant!!

The farmer was traveling to supply a biogas plant and mowed a total of 20 hectares of leased land. An employee of the plant testified that the defendant had noticed that he had “mown” two fawns.

Nevertheless, he has continued to drive, without acting on the other areas more caution, so the newspaper.

The result of the mowing: 13 dead fawns. For 12 of them is in the opinion of the local organic farmers responsible. However, the 13th fawn was probably killed by the carelessness of a contractor, explains the “Cellesche” newspaper.

Most died directly through the blades of the mower. Five fawns, however, were so badly injured that they had to be  so received the coup de grace with the knife.

According to the newspaper, the defendant is not remorseful in court, but assures that he did not kill the animals on purpose (!!!).

The prosecutor’s charge that he fulfilled the facts of “rudeness” could not be substantiated during the proceedings.

Ma comment: A farmer is a “serial criminal”!
With EU subsidies they buy monstrous tractors and drive recklessly through fields and forests. All of them have to Hunter’s license.

Farmers are antisocial, empathic-free and criminal pack. Farmers live at the expense of animals, and regard them as objects, as their slaves, with the right to torture and murder them; a criminal business that gives them good money.
So.. why should the farmer take care of the fawns?
Out of respect, empathy, or solidarity with the animals?

We can bet that until today he still can not explain why he had to pay 2000 Euros for the disposal of “13 meadow objects”.

Twenty-five cows destined for slaughter were given a rare second chance. Watch as they greet the beginning of Spring — and the start of their new lives — in a display of some of the purest joy you will ever see.

Watch the video of them entering the paddock area here: