In October 2018, more than 72 million bees died – in just one day. Three months after the mass extinction the cause was confirmed.
A pesticide sprayed on a nearby field is responsible.
In Argentina, near the city of La Paz, south of the Traslasierra Valley, 920 beehives were ruined in just one day.

On the other side of the world another beekeeper lost a million of his bees. Now the Australian beekeeper also received confirmation from a lab that the bees had died of fipronil poisoning, an insecticide commonly used to kill termites.
The beehives were about 5 kilometers away from another beekeeper, where about 120 beehives previously died from the same insecticide.
In Europe, an Austrian fruit-grower was even sentenced to jail for illegally spreading an insecticide. Dozens of neighboring bee colonies were destroyed.

It is a dying that is watched with concern worldwide.
Scientists have found that honeybees in Europe are killed by 57 different pesticides.
The vast majority of them are approved for use in the European Union.
The pesticide Thiacloprid from Bayer will continue to be used without restriction.
The most industrious of all animals, which reliably fly from flower to flower, disappears slowly.

A life without the bee is unthinkable. She is the big breadwinners of the people. The worldwide demand for natural products rests on their delicate wings.

The causes of the dramatic decline in insects are in industrial agriculture. In view of Monsanto’s “giant wedding” with its German rival Bayer, the criminal power of agriculture will increase worldwide in the coming years.  Pesticides, notably neonicotinoids and the insecticide fipronil, are threatening not only bees, but also other animals such as butterflies, birds, fish and earthworms, and threaten the foundations of global food production. This is proven by a study in which 29 researchers from all continents and different disciplines evaluated around 800 individual studies over the past two decades.

If bee mortality does not end soon, it could have serious consequences for food supplies worldwide, because not only in Europe, but also in other parts of the world there is a mass extinction of bees.
Bees not only produce honey, they pollinate more than 90 vegetables and fruits. Apples, nuts, avocados, soybeans, asparagus, broccoli, celery, pumpkins and cucumbers are likely to be rare without bees.
Sweet things like citrus fruits, peaches, kiwis, cherries, blueberries and strawberries and a variety of melon varieties depend on the fertilization of the flying workers.

My comment: Now Monsanto also wants to fight bee pests – using genetic engineering.
Monsanto’s focus is on the Varroa mite, a parasite that makes it difficult for honey bees worldwide.

In addition to bee pests, he will fight off weeds and insects in the future.
Monsanto sees bright prospects for its new “BioDirect” products – the market is already worth $ 1.7 billion a year. So it’s not about saving the bees. So it’s all about huge profits again.

And so Monsanto is omnipresent to each one of us. Whether in the glass of milk, in the Schnitzel, in the chicken leg… which animal is not fed with the cheapest, ie gene manipulated cereals?

We have t-shirts made of GM cotton, eat honey that could be contaminated, we fry our broccoli patties in GM corn oil. Whether we like it or not, for most consumers, especially in the US, Monsanto is a daily guest. Who only causes catastrophes. For humans, animals and nature. 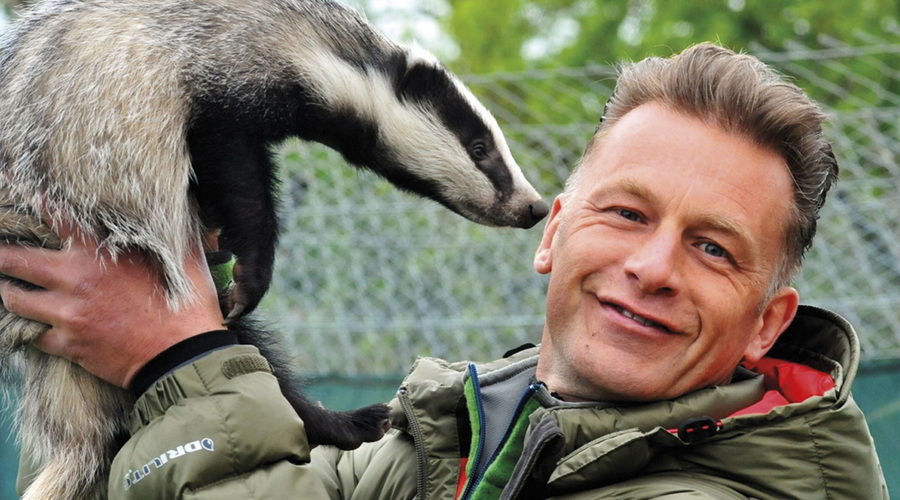 Chris Packham, who is a well known animal advocate and tv wildlife presenter; especially relating to all aspects of British wildlife; and also the hunting of migratory birds in Europe, has now had a “very calculated” death threat against him and his family after he campaigned for measures to protect birds from being shot.

Dead Crows were hung on his home gate:

Here are links to a couple of issues relating to Chris which were posted on our other site, Serbian Animals Voice; and also the BBC:

Chris said the  threats would not stop him from continuing his conservation work.

“People like myself are very dogged and determined,” he said.

“I cannot allow these things to sway me.

There are too few people standing up and fighting to protect our environment, our landscape, our wildlife.”

The new methods pertain to tests for eye and skin irritation, and according to vegan charity PETA, they will ‘will spare countless animals the agony of having substances dripped into their eyes and rubbed onto their skin’

While the new methods won’t replace animal testing, according to vegan charity PETA, they will ‘spare countless animals’ from certain tests.

The new methods, which will go into effect January 1, 2020, are for eye and skin irritation tests. PETA credited the The Institute for In Vitro Sciences (IIVS) for its ‘groundbreaking work’ in ‘training Chinese scientists and educating officials in modern non-animal methods’, helping to bring alternative test methods to China.

“We have seen first-hand how the partnership with NIFDC and our training program have built capacity and proficiency in alternatives,” Erin Hill, President of IIVS, said in a statement.

“The opening of the alternatives laboratory at the Zhejiang Institute for Food and Drug Control (ZJIFDC) is a wonderful example of how laboratories can expand to offer training and testing services in alternative test methods.”

“The approval of these two modern and humane tests is a huge step forward for China,” PETA US Senior Vice President, Kathy Guillermo, said in a statement sent to Plant Based News.

“No animal should be poisoned or blinded for a consumer product – or any other reason.”

“After years of pushing from PETA, the Chinese government has approved two more non-animal methods for testing cosmetics products in China,” PETA said in a blog post.

“The two newly approved tests, the direct peptide reaction assay for skin sensitization and the short time exposure assay for eye irritation, will spare countless animals the agony of having substances dripped into their eyes and rubbed onto their skin.

“This major progress is thanks to the groundbreaking work of the expert scientists and regulatory specialists at the Institute for In Vitro Sciences (IIVS), with whom PETA provided initial funding to train Chinese scientists and educate officials in modern non-animal methods.”

Cruelty-free is the best option

It added: “In 2014, the Chinese government announced that it would accept the results from non-animal test methods but only for non–special use cosmetics manufactured in China.

“Tests on animals are still required for all imported cosmetics and all special-use cosmetics, regardless of where they were manufactured.

“By purchasing only cruelty-free products, you can spare sensitive rabbits, guinea pigs, mice, rats, and other animals from excruciating tests, a lifetime of suffering, and death.”

Sign up for our newsletter to get the best of Plant Based News delivered to your inbox weekly.

Image: Jane Goodall and her team

That’s what you do with your friends. You say goodbye lovingly and give your sincere gratitude to the one who, after years of imprisonment, allows you to live in freedom.
Before going home, a final hug that no one will ever forget.
Gratitude is an exclusive trait of nonhuman animals.

Read a lot more at:

Click here to read the newsletter in full – complete with actions !

Picture taken near Quillacollo in the outskirts of Cochabamba – Bolivia
It seemed as if the animals were on their way to the slaughterhouse and there was no more space in the truck for the last cow. They hanged him outside the truck.
He was alive and visibly suffering. No authority did anything and the person who made the pic viral has since been threatened.

An atrocity, right? But is it really so different from being packed with all the others inside the truck? After all, they’re headed to the same place … your plate.

My comment: We often see such pictures on the internet.
However, they run the risk of being misunderstood. Because most readers fall victim to their sentimentality and believe that this criminal act happens because animals end up on our plate.
This logic is very dangerous.
Because for these people it is not crucial if the hanging cow has to survive a long transport or is transported in trucks, standing, with the others.
Is it really the same?
No! It is a fundamentally wrong interpretation!

Eating these animals is legal. Transporting an animal in this way is illegal.

That’s what we’ve been fighting for, and we’re still struggling every day, so that not every criminal, anywhere in the world, does what he wants with the animals.
One speaks of laws.
One speaks of punishments, if these laws are not kept.

Otherwise, any unscrupulous slaughterer would allow himself to torture animals, with the practical excuse: “They end up on your plate anyway.”
And under the same logic we could also say that people could be tortured if they end up under the earth anyway !!

According to a recent article from Komo News, some of Seattle’s most popular restaurants are ditching chinook (king) salmon in an effort to help save critically endangered orcas.

Chinook will not be served at Vine and Spoon or Alchemy in West Seattle. The restaurant owners joined others in taking a stand after a concerned customer brought up the plight of the orcas and shared images of a mother orca grieving her dead calf and another orca struggling to survive.

The plight of the orcas right now is so tragic so important to maintain their food resource it was very simple and no-brainer to take off the king salmon from our menu to help our environment.

Declared endangered in 2005, the Southern Resident orca population has seen little recovery. In fact, more than two-thirds of these whales’ pregnancies fail, and a recent study suggests the orcas are starving because of human activity.

Overfishing of chinook salmon is believed to be the main cause of the orca population’s decline. Chinook salmon, who compose roughly 80 percent of the whales’ diet, are a critically endangered species, and overfishing is the primary reason. Popular wild-caught fish, chinook salmon were added to the list of overfished species in 2015.

The National Oceanic and Atmospheric Administration published a report in 2013 warning about the impact of salmon fishing on Southern Resident orca populations. Although the report expresses uncertainty about the long-term effects, it states that ending or reducing salmon fishing would have an immediate positive impact.

Our oceans are extremely complex ecosystems, so when one species declines, others suffer. For instance, Atlantic puffins on the Shetland Islands depend on sand eels to survive. Once sand eels were overfished, puffin numbers dramatically declined. When herring is overfished, cod populations fall. Many fish species and their predators are now endangered or face extinction because of overfishing.

The best thing we can do for all marine animals is to refuse to support an industry that disrupts the balance of nature’s ecosystems and puts species at risk for extinction.

But eating seafood doesn’t just hurt orcas and other “cute” marine mammals many people value; it’s also unspeakably cruel for the innocent fish killed for food. Fish are similar to dogs and cats in their experience of pain and pleasure.

In 2011 Mercy For Animals conducted an undercover investigation at a fish slaughter facility and exposed fish being skinned alive. They thrashed and fought to escape the workers’ knives. As the fish gasped for oxygen, workers ripped off their skin with pliers.

Sounds horrifying, right? See for yourself.

Remember, the best way to protect fish and other marine animals is to leave them off your plate. Learn more about switching to a humane plant-based diet to prevent cruelty to all animals used for food. Then check out Gardein’s fishless filets and crabless cakes, and click here for compassionate sea-inspired recipes