“On the 21st of April, Easter Sunday, two stables with thousands of pigs have gone up in flames in Klein-Wanzleben, district in Saxony (Germanx) The cause of the fire in the pig farm is still unclear. It was also unclear whether the animals burned or suffocated on the gases. The smoke column was temporarily seen from 20 kilometers away.

The buildings are in full bloom, said Enrico Grube from the police station Börde. In the total of nine pig farms, it is estimated that between 45 000 and 75 000 pigs are housed – more exact figures are not available.”

This is the press release, and it was the same to read in all newspapers. More time and space have not been wasted on this tragic accident.

How many pigs are housed in a fattening system, we learn when, for example, a fire breaks out.
According to police, between 45,000 and 74,000 animals are housed in the stables.
The plant consists of a total of nine stable buildings.
Around 2000 piglets could not be saved, they were burned alive.
Fattening pigs, gilts, sows and piglets are kept. 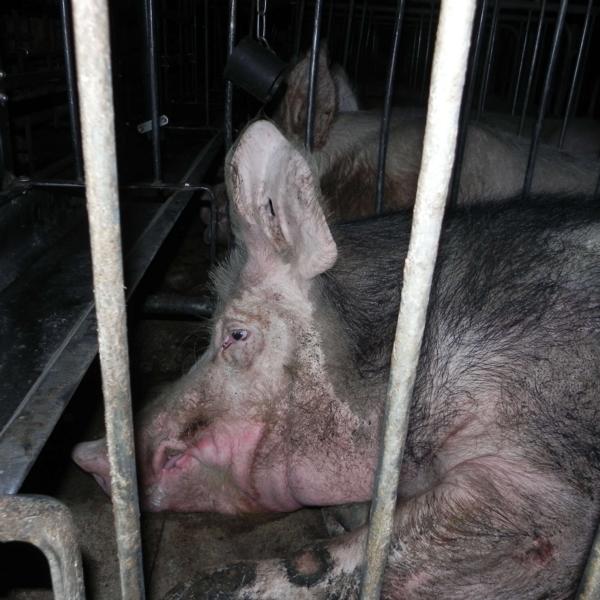 It was only last year that 109 of 180 piglets died in an animal transport in the region because the transporter was overloaded.
Did you know that the small piglets from different countries are being carted to Germany? More than 16 million pigs are imported from abroad each year to Germany.

56.6 million pigs are slaughtered in Germany, because Germany is one of the largest meat exporters in the world.

Many pigs do not make it to the slaughterhouse, they already die before. Can you imagine that? between 45,000 and 74,000 animals on a pig farm? And in addition in such a fattening plant with 60,000 pigs a fire broke out, in which 2000 piglets died!!!

Do you still remember Adrianus Straathof? He ran six in Saxony-Anhalt alone pig breeding farms.
After heavy criticism on the basis of the conditions in Gladau (Saxony) determined 2013 the public prosecutor’s office. Straathof has been in the criticism of the conditions in the piglet factory Gladau for some time. The Dutchman was convicted of forced and fined € 2.1 million. Did he ever pay?

End of 2014 then the message: Animal husbandry ban for pig Baron Straathof! In addition: If the case becomes final, this could be the turn in factory farming.
But there was no turning point in mass animal husbandry, as you can see from the current case in the pig farm in Saxony that 45,000 to 74,000 pigs are still kept.

Saxony-Anhalt seems to be a “pig country”, where Easter Sunday broke out in a pig farm in Klein Wanzleben a fire and 2000 piglets had to give their lives.

The animal rights organization ARIWA, through undercover investigations in 2015 and in the same place, found that there were serious, unavoidable animal welfare violations in the local farms. The animals there suffer in a way that we humans can hardly imagine. (we are still talking about the same farm!!)

As in other documented cases, the sows are fixed motionless for weeks in such small crates that they can not even stretch out their legs when lying down. Shelter stalls do not provide drinking water for the thirsty animals.

Boars are illegally locked in physical cages. At some crates, faeces and urine can not run off, so that these clean sows must smear with their own excrement.

A gilts hall is lit neon-bright around the clock – a method used by people for torture. As in so many other installations, the regulatory offenses are piling up in such a way that they result in crimes against the Animal Welfare Act. These could be easily punished with a withdrawal of animal husbandry or even with imprisonment.

In addition, the plant also illustrates the countless quite legal animal cruelty in German livestock farming.

An example: gilts, which are not yet old enough for an economically worthy insemination, can be fixed completely legally in box stalls indefinitely, without possibility to move. Because the animal protection ordinance prescribes that sows may be in the crate stall for a maximum of 28 days after insemination.

For inseminated sows but the regulation does not regulate this point. This applies to gilts as well as sick sows or those who do not get pregnant in the crate despite insemination or lose their fetuses within the first four weeks.

All these sensitive animals may be locked indefinitely in the crate stall at the pet owner’s discretion. The pictures from the plant show a large hall full of gilts, which have been fixed motionless for months in this way. Here it is confirmed that loopholes of animal owners are exploited as soon as there is an economic interest behind it. Even if it means unbelievable suffering for the animals. Which, how we know, no one interested in the slaughterhouse.

The question that arises: is Adrianus Straathof still active? On January 16, 2015, there was a change in the management of the District Court Potsdam :
Managing Director of GLAVA GmbH: Heidrun Spengler-Knappe · No longer Managing Director: Adrianus Gerardus Maria Straathof!

And if we continue our research, we will return to the pig baron Straathof, who has been active in Hungary since 2018, near the border with Croatia and Serbia.

My comment: The terrible pictures in video with the illegal housing conditions for the animals come from the fattening farm  which at that time belonged to the pig-baron Straathof.
Whether today the same plant, where 2000 lives were burned alive, still belongs to this criminal, we do not know.

And it’s not easy to find out.

Because this corrupt system operates hand in hand with the meat mafia and with all those who are actually the pillar of this system. Animal abusers, environmental criminals, meat and hunting mafia all of these are well protected by the system.

Was not it, that the lawsuit against the lab-torturer Logothetis from the laboratory in Tübingen was annulled?
Was not it,  that the murderer of Lioness Cecil, Parker, never stood trial?
Was not it, that Dog Hucher’s mafia boss in Romania, Barbulescu, did – and does still – his criminal business with EU funds?

We all, and especially the animals are at the mercy of these criminals.

Regarding our recent post about 2 little bears who were being abused in a Vietnamese circus:

Well we can now provide an update from Animals Asia – the little bears have been removed from the Circus, given a health check by AA and have now been moved on to their sanctuary. Very rapid responses and actions by the brilliant Animals Asia – thanks to them once again.

Cubs Sugar and Spice were rescued after Animals Asia investigators discovered them being forced to perform on stage in downtown Hanoi, Vietnam.

The cubs were transferred to Animals Asia’s award-winning Vietnam Bear Rescue Centre in nearby Vinh Phuc province on Wednesday 24 April, where they immediately entered a quarantine area.

“We’re very grateful to the authorities for taking swift action in this case and sending a clear message to circuses around the country that they are not above the nation’s wildlife laws.

“This rescue will be a deterrent to those who would commit wildlife crime, a wake up call for the public who may consider attending an animal circus, and hopefully a catalyst for the government to take a closer look at other facilities around the country using protected and endangered species in their shows.”

The cubs, named Sugar and Spice weigh just 36 and 50 kilogrammes respectively and are believed to be under a year old. A preliminary health check found no serious health problems but Spice was found to have a scar on her wrist – likely from being trapped in the wild – while Sugar had suffered some dental damage.

With no survival skills and no safe forest for release, it is likely the bear cubs will spend the rest of their lives – potentially up to 30 years – in the care of Animals Asia.

At the sanctuary they will have access to large, semi-natural outdoor enclosures filled with trees, grass, climbing frames, swimming pools and rock piles which will keep them stimulated and encourage natural behaviours.

When they are old enough, they will be integrated with an existing community of bear providing even more stimulation for the duo.

While Hanoi’s Central Circus holds many other endangered species, including moon bears, macaques, pythons and an elephant, Animals Asia was unable to rescue these individuals as the circus currently holds legal paperwork for their ownership.

An Animals Asia investigation in 2017 revealed that circuses up and down the country were routinely forcing endangered species to perform while 100% of facilities failed to meet the basic needs of the animals.

This video gives an overview of what happened with the rescue – from Hell to Heaven – Enjoy !  :