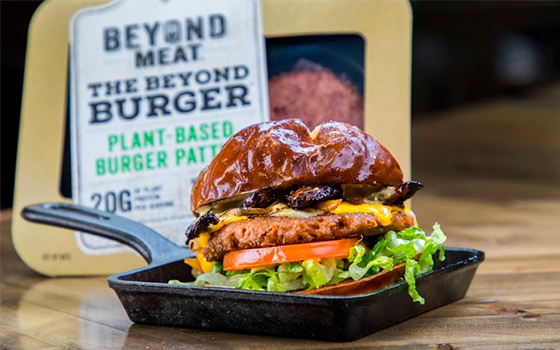 South Korea is not an exception from the growing global trend of vegetarian diets with a newly imported plant-based meat product becoming an instant hit in the country.

According to multiple sources from the industry on Sunday, about 10,000 packages of meat-free patty product of Los Angeles, CA-based Beyond Meat were sold in just one month after being introduced to Korean consumers last month. Several online malls including Dongwon Mall and Gmarket started offering Beyond Meat’s plant-based meat products, as well as four vegan restaurants.

An official from Dongwon F&B Co., the exclusive supplier of Beyond Meat products in Korea, said that the brand has been well received in the marketplace given that it offers specially targeted products and are sold online.

WAV Comment – Sounds good; all they need to do now is stop the dog meat trade and it will be very much better !

Check out a few of our recent posts:

Sealers will be killing tens of thousands of helpless young seals before they’re through, shooting them or slamming spiked clubs into their soft skulls, then tearing their skin off—often in full view of family members helpless to stop the killing. It’s up to kind people like you and me to make sure that this year’s massacre is the last.

The commercial slaughter of seals in Canada is on its last leg, yet despite the growing outcry against it both in Canada and around the world, the Canadian government is allowing it to take place again, leaving countless bloodied bodies in its wake. Many seal pups are so young they haven’t even learned how to swim before they’re violently killed.

Thanks to the activism of PETA members, there are few countries left that are willing to buy seals’ skins, their flesh, or seal oil—and it’s clear that this grisly trade is on life support. Without the millions of dollars in government subsidies it receives, it would have collapsed long ago—and with your help, we’re urging Canadian Prime Minister Justin Trudeau (below) to stop propping up the sealing industry with taxpayers’ dollars.

If you wish to make a donation to help this campaign and to try and make Canada stop the cull, then go to the following:

The ” horrendous” moment a lion attacks his trainer while cruelly performing in a circus has been caught on camera and it’s really awful (!!!)

The terrifying situation was filmed by a tourist as they watched the torturous circus in Lviv, Ukraine, causing mass outrage among viewers.

Another lion turns on (slave) trainer Oleksiy Pinko and for a few moments, he completely disappears beneath the powerful creatures.

Frantically, Pinko tries to push the lions back with a metal rod, but one of the beasts rears up and bites him in the leg, while another locks his strong jaws around his arm.

The audience, which contained hundreds of people, including children, start to scream in horror while other trainers use water hoses and metal bars to pry the lions of Pinko who was feeling the full wrath of the big cats.

His arm, leg and back were mauled and clawed before he managed to fight the animal off. After a fearsome battle, Pinko manages to make his escape away from the angry pair and emerges limping and dripping with blood!

The watchers, however, seem to be and understandably more on the side of the meanly kept lions.

I was just grabbing my daughter and trying to run because I thoght they were going to get us!

“The use of wild animals in the circus needs to be banned”.

“I’m sorry but I’m totally on the side of the lions here. It’s shocking making them try to perform”.

This is the “terrifying” moment a lion suddenly attacked a circus trainer in front of a large audience of children and parents in Ukraine.

He then faced up to it as the predator eyed him for a new attack. Finally, the big cat retreated and ran out of the ring to its cage.

A mother watching with her two children said: ‘My heart stopped when the lion pounced at the trainer”!!!

‘I called up one lion, and the second one attacked me from the front,’ said Kouta afterwards as he showed his scratches.

‘I stopped him in the middle of the ring calmed him down but he refused to return to his sitting position. I stepped backwards, there was a stand behind me, I hit it and fell.

‘The lion jumped at me and bit me – but thank God not on my neck . He immediately let me go. My back, arm and leg were hurt.

He works (!!!) with ten lions and all those in the ring returned to their cages immediately after the shocking attack, he said.

Despite his injuries, Pinko made a full recovery and has been seen performing in the circus among the big cats since.

And I mean: The slave lion has told us, with his behavior, everything about his long torture.
That he, as a youngster, was captured and imprisoned. That his “education” was nothing but the breaking of his will through constant brute force, isolation, dirty, tight cages.
All this we have learned in this number.

We bow to you, Leo.
We solidarize with you, and fight every day so that your conspecific no longer have to suffer under the circus mafia (including complicity).
If there was a just judgment, you would appear there as a freedom fighter, not as a beast, as the dirty press has labeled you.
And you would have on your side a thousand civilized militants who, like you, fight for the end of slavery in the circus industry.

At the next attack hopefully the slave Leo extends the revenge in auditorium. For the love of justice!