Oatly has unveiled ‘It’s like milk, but made for humans’ campaign in the UK where it will run in busy London Underground stations.

Swedish oat drinks company Oatly has launched its first nationwide UK campaign: ‘It’s like milk, but made for humans’. The creative is based on Oatly’s previous European marketing efforts, which resulted in the brand being sued by Sweden’s dairy industry in 2015.

The marketing launch hopes to convince UK consumers to swap their traditional cow’s milk for a plant-based, oat drink alternative. A couple of decades ago, Oatly had the original idea to create a nutritious alternative to milk without going through the body of a cow. Oatly’s mission is to make it easy for people to eat the healthy food they love, without recklessly taxing the planet’s resources in the process.

This month, Oatly unveiled a brand new range of chilled oat drinks: Oatly Skinny, Semi and Whole. ‘It’s like milk, but made for humans’ describes its new range perfectly, because after all, cow’s milk is actually meant for baby cows. 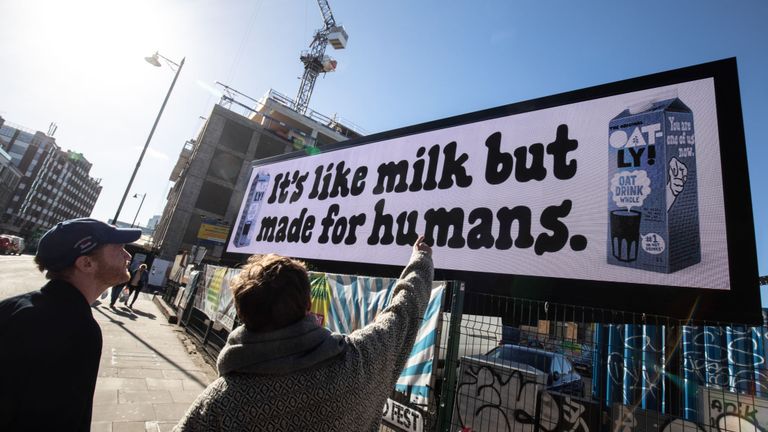 Until now, Oatly has only advertised in East London. The new, £700k campaign will see the campaign running across key London underground stations such as Kings Cross and Oxford Circus, as well as high impact sites in areas including Shoreditch, Peckham and Brixton. 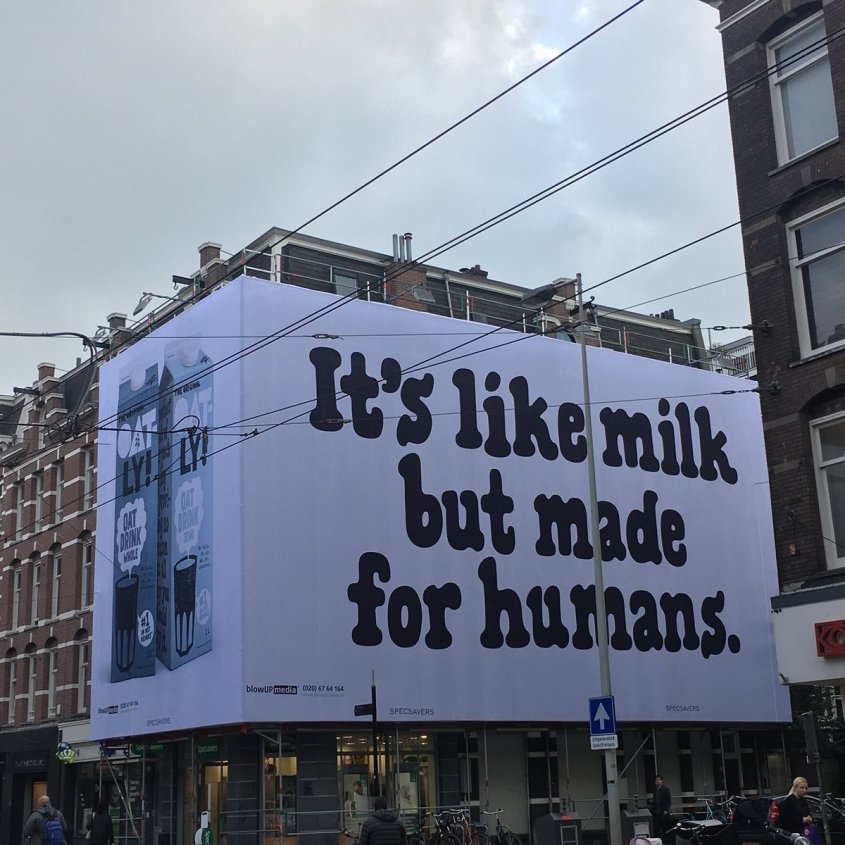 Oatly’s Creative & Strategic Director (International Markets), Michael Lee, commented: “Some consider our messaging to be controversial. We disagree. It’s fact, because our oat drinks actually are made for humans, rather than for baby cows. Although we lost a lawsuit from the Swedish dairy industry in 2015, we still believe in the line, it’s still the truth, which is why you’re seeing it across the UK.”

Meanwhile, the same campaign has arrived in the underground station in Berlin at Alexanderplatz.
Here the picture below shows the advertisement attached to 10 places next to each other.
A brilliant idea!!! 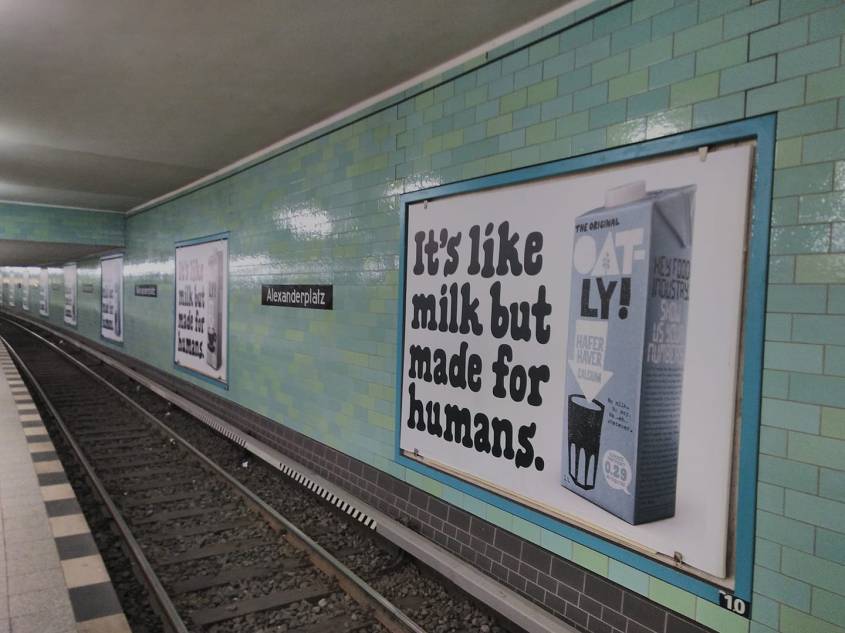 The next time you witness the footage of Dolphin slaughter by the Japanese at Taiji; or you are told by a friend of someone’s experiences and ‘enjoyment’ watching dolphins perform in some little crappy tank at a ‘Sea life’ facility; here are a few chunks of in info that you can throw back at them in defence for these wonderful marine creatures.

Dolphins are ‘extra-terrestrials with fins’. Their brains are more complex than those of humans; their ‘language’ is more sophisticated and they belong to a society which practices the freedom of love and peace. Unlike humans; they don’t seek pleasure out of killing others; and yet despite imprisoning them for the pleasures of performing for some of our more uneducated kind, they have been recorded throughout Greek and Roman myth as saviours of humankind in distress. Do they still do it today ? – or is this past a reflection on the fact that at one such time, man allowed them freedom to range the oceans; did not hunt them, and did not expect them to provide so called ‘entertainment’ for us. Maybe they paid us back better in past times.

They have big, smiling faces. In some locations around the world, they work with man to herd shoals of fish into locations where local fishermen can easily catch them – in return for few treats thrown back to them of course !

They navigate in the wild by an echo location system; so precise that if one was to dribble just one teaspoon of water into a pool, they will be able to locate the source with pinpoint accuracy. They have the ability to discriminate between objects made of plastic, rubber or wax; and they can even tell the difference between identical -looking copper and brass discs ! 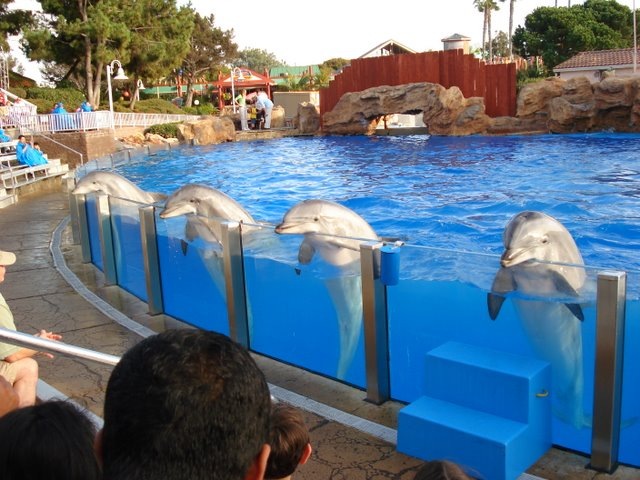 Dolphins are known by us humans to ‘talk’ a great deal; but actually, they have no vocal chords. They communicate with each other by way of clicks, squeals, whistles, grunts and barks; which all originate from sacs located in their nasal passages at a rate of up to 1,200 per second. Each animal has a unique signal whistle which it uses constantly to inform others in the pod of who they are and where they are located at any specific time. They are also known to do exaggerated impressions of other dolphins both for fun or to get attention form the one they are imitating.

Their play is highly complex and they are very fats learners; as we see in the performance tanks at our pathetic sea life facilities, and sadly, they have the ability to follow complicated human demands. They can recognise themselves in a mirror; and are even known to use simple tools, such as a sponge, which they attach to their snouts when out hunting amongst sharp coral – a kind of dolphins ‘safety mask’ you could call it.

Dolphin therapy, such as swimming with same, may have some reported therapeutic benefits according to some reports; but we should also remember that these are beings of the oceans; and as such, more health benefits can also be gained by watching them in their natural environment via a pair of binoculars held on the deck of a ‘wildlife tourism’ boat. 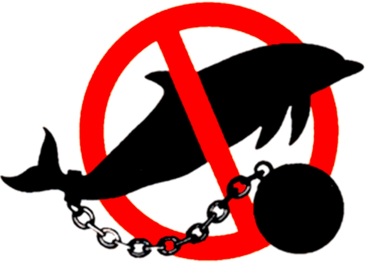 As creatures of the wild, given the natural options, what right do we as less intelligent beings have to drive them in for mass killing and selection at places such as Taiji. Man the killer; one of his less favourable specialities; but undertaken for too much in all aspects of animal abuse.

Taiji; it will die and go down in the records as another example of mans immense suffering of intelligent animal species. I personally have ‘man watched’ in the past when holding welfare stalls in towns across the land. Oh to be with the dolphin given what can be seen regularly on the streets of modern towns and cities.

They are special and deserve our protection; not our abuses in the cove or performing for those who have a ‘money god’.

Fight for them – be their voice; but above all, fight – they deserve it.

Below – good folk in London being a voice.

I think this clip is just great.
That’s how I would have done it.
So you have to do it, if you want to save a life.

Even if we risk a punishment with it, a life is more important.

However, despite everything, you should try to keep the damage as low as possible. No front or rear window !! Turn in the side window to open the car. All documentation is very important and then the police call!!