The investigators of Animal Equality, Mexico documented the terrible everyday life in 21 slaughterhouses. Some of the slaughterhouses are owned by the government, such as Jalisco, Nuevo León, Aguascalientes, San Luis Potosi, Colima, Zacatecas and Nayarit. The footage clearly shows how these farms regularly violate the Federal Animal Health Law – without any legal consequences: 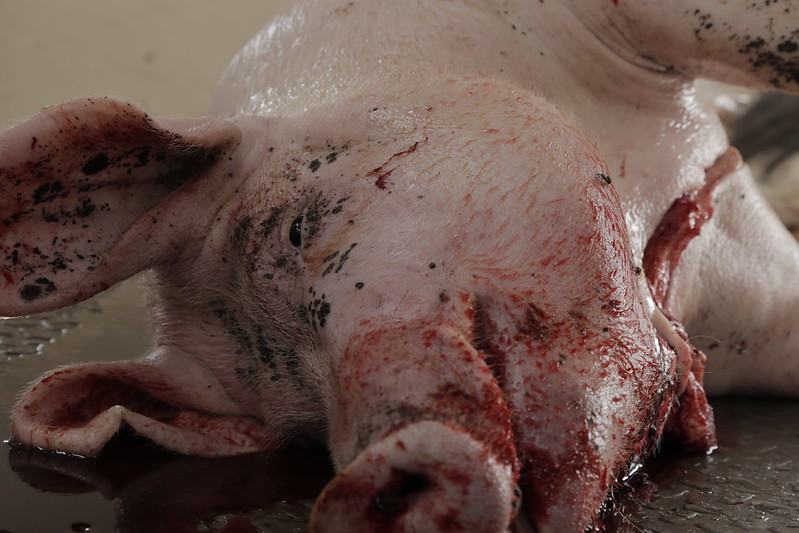 -ALL pigs are fully conscious when they are stabbed. In most slaughterhouses, pigs are killed by being stabbed in the side with several knife wounds and then bleeding to death.
In none of the documented abattoirs are sheep and goats stunned before slaughter. The animals are tied together, a worker pulls them on one foot over the ground and then cuts off their heads. 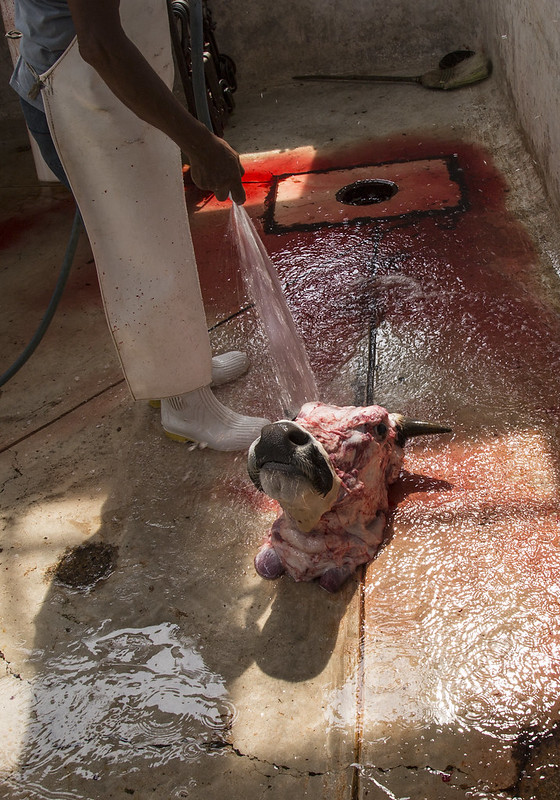 -Workers forcibly force them to move with blows and electric shock when they panic. 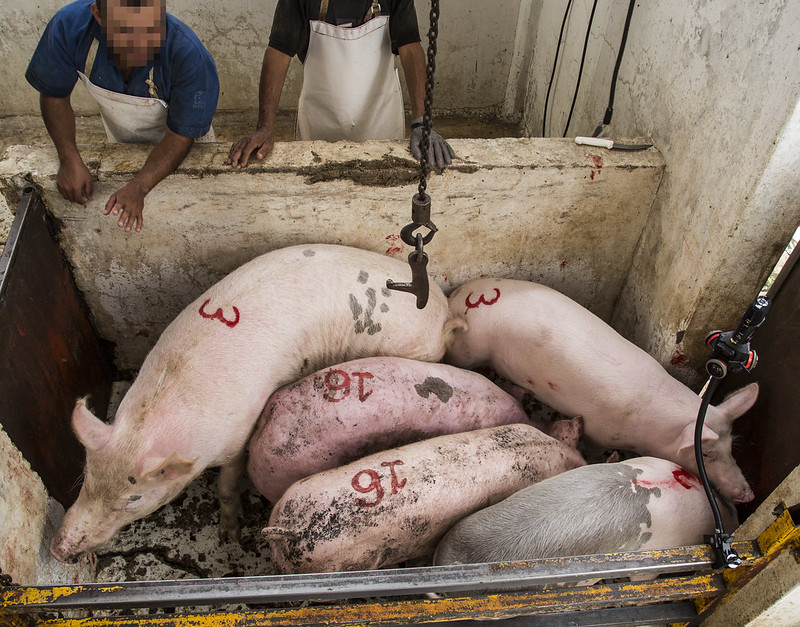 -Workers kill more than three pigs at the same time. 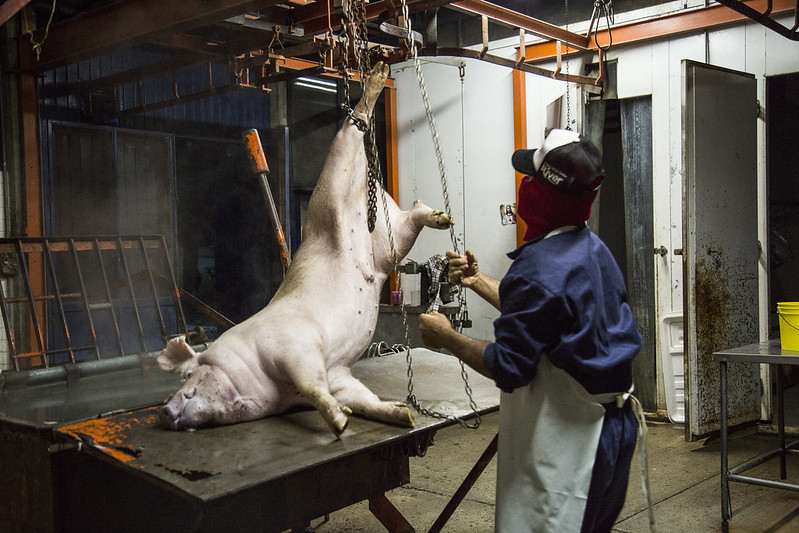 Some pigs try to climb over other pigs to escape the impending death, while the workers kill the other pigs and begin dissecting them. 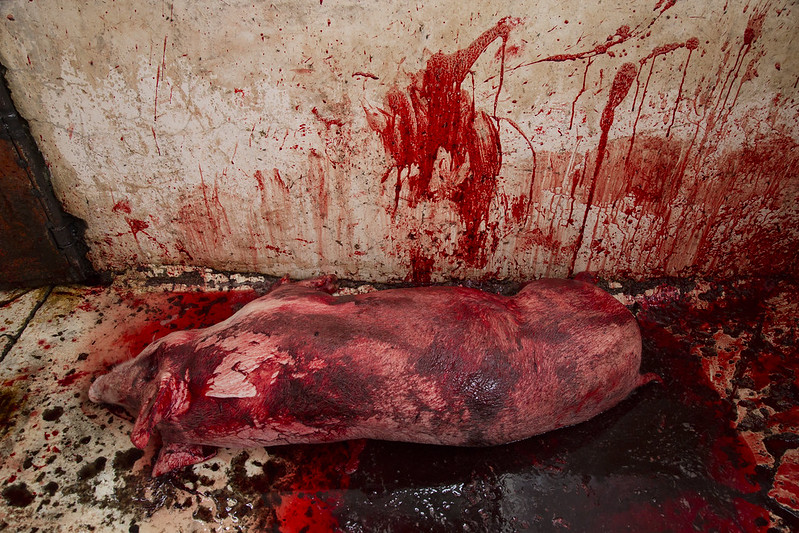 -Pigs are beaten with a hatchet.
-Cows are driven forward with surges. 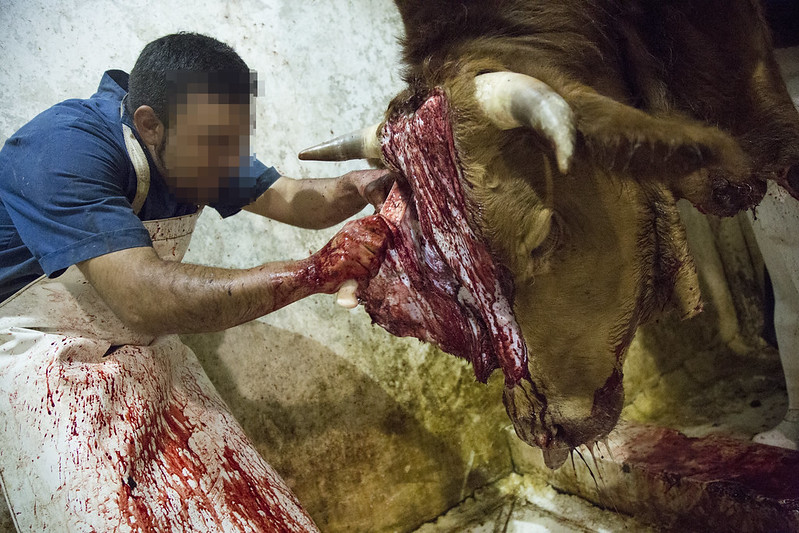 -Bleeding cows try to get up after they wake up from their anesthesia. Partially, underage children are present at the time of killing the animals.
-A worker ties a lamb, slits his throat and rips his head off while fully conscious.

These practices did not constitute a crime. In Mexico, there have been no laws protecting so-called livestock from maltreatment.

The current animal welfare laws that protect dogs and cats do not prescribe any regulations for the animals in the breeding, fattening and slaughterhouses of the food industry. If somebody treated a dog or a cat like workers in the farms visited, such as pigs, cows, sheep, chickens or goats, these people would have to face imprisonment.

The Animal Equality team in Mexico has managed to change this, at least in the Mexican state of Jalisco, with an unprecedented initiative.

Anyone who abuses so-called livestock in the future commits an offense. 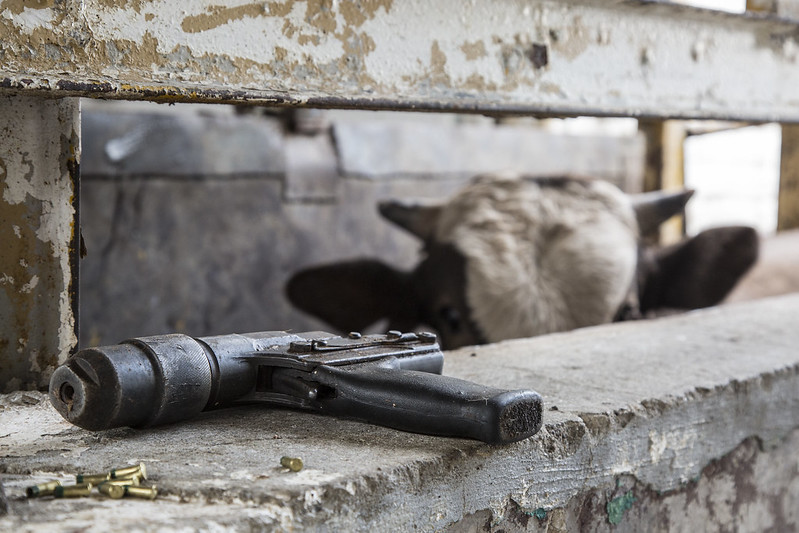 This is a significant advance for animal welfare in Mexico!

That’s what the congress of the Mexican state of Jalisco decided at the weekend by an overwhelming majority. The amendment has a direct impact on 211 million animals a year: so many are killed every year in slaughterhouses in the state of Jalisco alone. 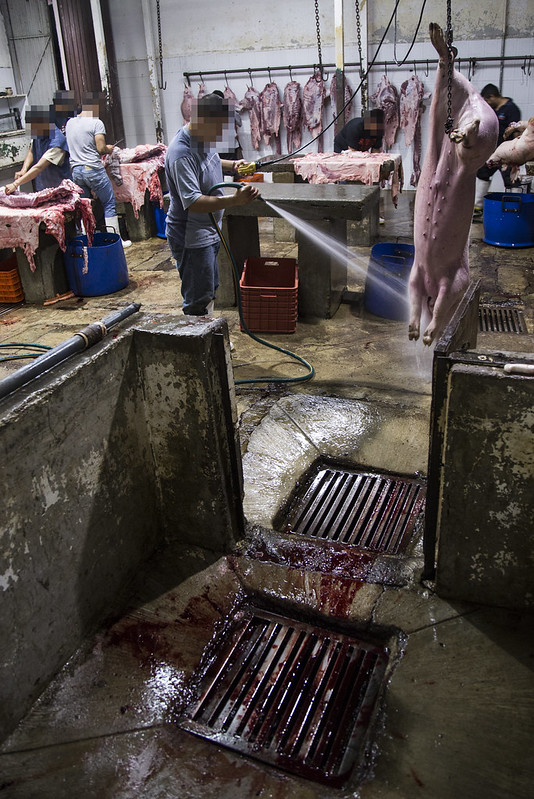 For the first time, the abuse of so-called livestock in a Mexican state is considered a criminal offense. A strong signal to the rest of the country, which will hopefully follow suit soon.

The Animal Equality team in Mexico will definitely stay tuned and we’ll keep you up to date.

And… of course, Animal Equality would monitor closely whether the farms would comply with such regulations in the future.

My comment: We welcomed the 21st century long ago, but in the sense of “morality” we still live on the trees. These pictures prove it. That most animal eaters see such images and still participate in this daily, excessive mass murder of innocent beings proves that the human species has lost any ethical basis.

The daily torture and exploitation of our fellow animal beings for food is a matter of course in the still underdeveloped conscience of the human world.

Given that such massacres happen in EVERY land and are now widely publicized and shown many times but still have 7 billion meat eaters, one can say with certainty that the only honest reason why people eat animals, the fact is that the suffering of other beings interests them a shit.

Thank you, Animal Equality, for the courage, perseverance, and loyalty to our animal comrades!