Scientists at the University of Osnabrück (Germany) are currently working on the question of what influence artificial light sources have on the well-being of chickens in so-called livestock farming. They are sure: the wrong lighting has a strong impact on the health of the animals, who perceive the light quite differently than we humans. The unnatural bulbs they have been exposed to their entire lives are disrupting their natural rhythm and leading to stress, disease and behavioral problems.

Light plays a significant role in the natural rhythm of a chicken’s life. It naturally influences regulated processes, such as eating behavior, laying activity, moulting and the dynamics between active awake and passive rest periods. In the stables, however, completely different lighting conditions prevail, as those to which a chicken is naturally adapted. What we humans experience as white, flicker-free light, for example, is similar to chickens, like the effects of a wild disco lighting that flickers in different frequencies and shines in bright colors. 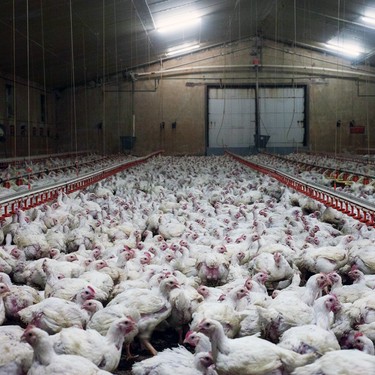 Light plays a significant role in the natural rhythm of a chicken’s life. It naturally influences regulated processes, such as eating behavior, laying activity, moulting and the dynamics between active awake and passive rest periods. In the stables, however, completely different lighting conditions prevail, as those to which a chicken is naturally adapted. What we humans experience as white, flicker-free light, for example, is similar to chickens, like the effects of a wild disco lighting that flickers in different frequencies and shines in bright colors.

Due to the different structure of the organs of vision, chickens have a different visual perception than humans. Their environment is therefore very different for them than it is for the human eye of the norm. After all, chickens actually see better than we do: instead of three, they have five so-called cone types and thus perceive a broader color spectrum. Her eyes are also designed for the ultraviolet range of light. For example, objects that simply look like black to humans can appear to them in many bright colors. 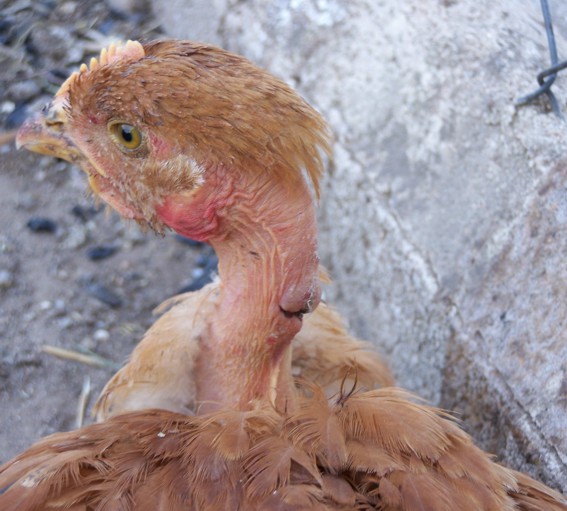 Also, the number of different images that can process the eye of the chicken in a second, significantly affects his perception: While there are only 20 to 60 images per second in humans, the chickens’ vision becomes about 160 images per second registered. This has the consequence that the animals, for example, in an AC powered light bulb can detect the annealing of the wire, although this simply shines evenly for people.

In terms of brightness, the eyes of a chicken are up to ten times more sensitive than ours. As the light sources in the stables seem brighter for them, the chickens are blinded by them. On the other hand, the insulated lighting there does not correspond to the darkness that chickens need during their rest periods.

This photosensitivity may also provide an explanation for the hitherto unanswered question of why many free-range laying hens often prefer to stay in the barn instead of spending time in supposed freedom.

Disturbing environment as a cause of unnatural behavior

Since the artificial lighting in the stables does not emit UV light and shine brighter than is necessary for the chick’s eyesight, the animals perceive a visual distortion of the reality of their surroundings.
The unpleasant lighting conditions, according to the scientists, are likely to affect the negative moods of the animals and can lead to aggressive behavior such as feather pecking or self-mutilation. 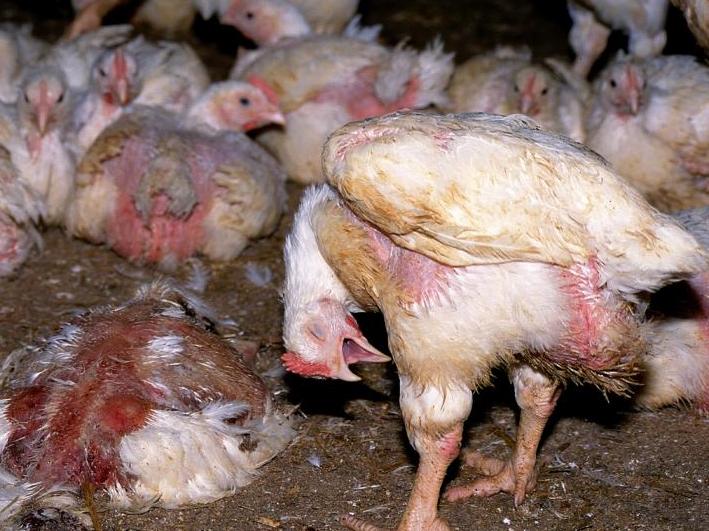 In addition to other factors such as high population density, stinking stable climate or lack of employment opportunities, false light can be responsible for many behavioral problems, illnesses and deaths. Worse is the fact that in most laying hens the beaks are cut to prevent cannibalism. This is done in a very painful way. 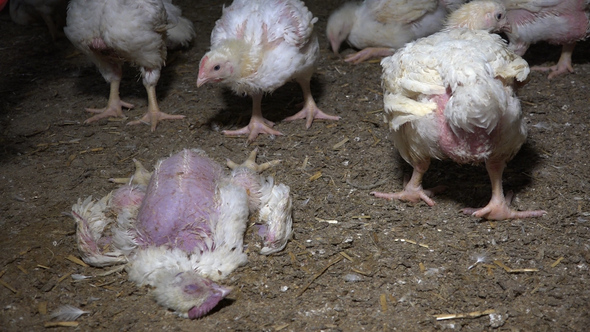 In order to reduce the suffering of chickens in industrial livestock, research, companies and livestock owners must work together to adapt the standards in the stables to the biological conditions and the natural habitat of the chickens. The example of false lighting in the chicken breeding and fattening systems raises the question to what extent other animals in “livestock husbandry” – in addition to the obviously tormenting conditions – suffer from stress factors that are imperceptible to humans. Because all stables and livestock farms are constructed from a human perspective, mostly without knowing the individual perception and the specific needs of each animal species. 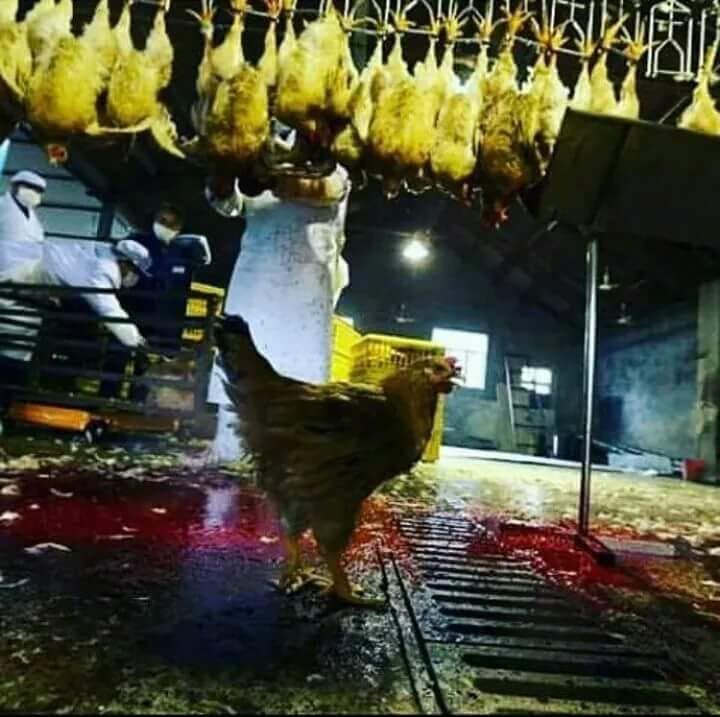 Every animal deserves to live in freedom and in a species-appropriate environment. By choosing herbal alternatives, we can eliminate the exploitation and suffering of animals. Day after day!

My comment:  In the video we can see how live the so-called “organic” chickens in Germany. The video was shot undercover by the organization “animal friends” in 2012. For those who think: yes, but it is old … since then, nothing has changed.

The meat eaters who are cheated by both- the meat mafia and the politicians- because they pay dearly for organic meat, although it is not- are not interested too. Not for the suffering of the animals, not for the fraud of a corrupt system. And so, all those involved in this daily murder and deception can continue to work together because they share a common goal: to live on animals!

In Germany, 51.9 million chickens are currently kept for the purpose of egg production. In dirty and full stables.

Ovarian infections, peritonitis, parasitic infestation, sternum curvatures and breastbone fractures, consequences of cannibalism, viruses, bacteria – a painful, silent and often slow death is the result also in the so-called organic husbandry systems. There is never any medical help for injured and sick animals – the animals suffer and die mostly in the middle of the stable area.
Man has decided that animals are a matter, and under this fascist conviction, the daily murder of animals takes place with such sadistic coldness and cynical indifference that only a human animal can possess. 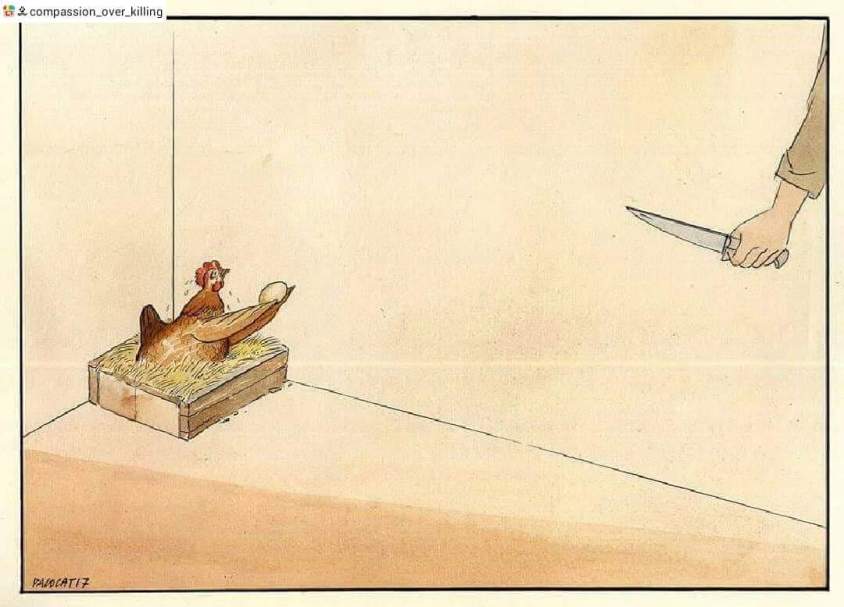