Documents obtained by PETA reveal that Johns Hopkins experimenter Shreesh Mysorecuts into the skulls of barn owls, inserts electrodes into their brains, forces them to look at screens for hours a day, and bombards them with noises and lights—and pretends that doing this will tell us something about attention-deficit disorder in humans

Funded by Johns Hopkins University with more than $1 million, Mysore intends to use 50 to 60 barn owls in just the current set of painful experiments. He’s also received more than $1.3 million from the National Institutes of Health to torment these owls and other animals.

Six owls are just for his students to practice surgery on and then kill.

What He Does to Owls
Mysore cuts into owls’ skulls to expose their brains. Then, he screws and glues metal devices onto their heads. The owls endure two to three invasive surgeries before Mysore uses them in experiments.

This owl is one of many imprisoned in Shreesh Mysore’s basement laboratory, where he cuts into their skulls and screws metal devices onto their heads in curiosity-driven experiments that have no relevance for human health.

These birds—who are nocturnal hunters who would fly great distances in their natural habitat – are forced into plastic tubes so cramped that they can’t move their wings while Mysore bombards them with sounds and lights and measures their brain activity.

For some experiments, he restrains fully conscious owls for up to 12 hours.

During these experiments, he pokes electrodes around in the brains of the fully conscious birds, mutilating their brain tissue so severely that they become “unusable” to him – at which point he kills them.

Mysore admits that his experiments are painful for the owls,yet in his grant application for the experiments, he provides scant information on any pain medication that would be administered.

All the owls are killed at the end of the experiments.

Mysore claims that his experiments could help humans, but owls have well-developed auditory and visual systems that are specialized in target selection (unlike humans).

Bombarding these animals with artificial stimulation while their brain activity is measured in a distressing and completely unnatural situation does nothing to further understanding of human attention-deficit disorder.

In another published work, Mysore describes how he placed the owls in a retention tube so that they were vulnerable – an unnatural position for them – and then, screwing the bolts connected to their skulls into a “stereotactic device” moved their heads.

Each year, the National Institutes of Health (NIH) conducts more than $ 15 billion in tax credits for animal testing.

Johns Hopkins is at the head of the line to drive the government’s Gravy Train and secure hundreds of millions of dollars a year for experiments on animals.

Putting your subject line and letter into your own words will help draw attention to your e-mail.

My comment: Those all are called Mengele, all these remind us of the brown times with the experiments on humans in German laboratories in the Nazi times .

Psychopaths, unscrupulous sadists, who build a rich carefree life and career on murder and torture of defenseless animals and have the audacity to state publicly that they are pursuing these cruel works for the good of the people`s health.

“There are only two reasons for animal testing: either one knows too little about it or earns too much of it”

Major dog meat market in Busan to close next month 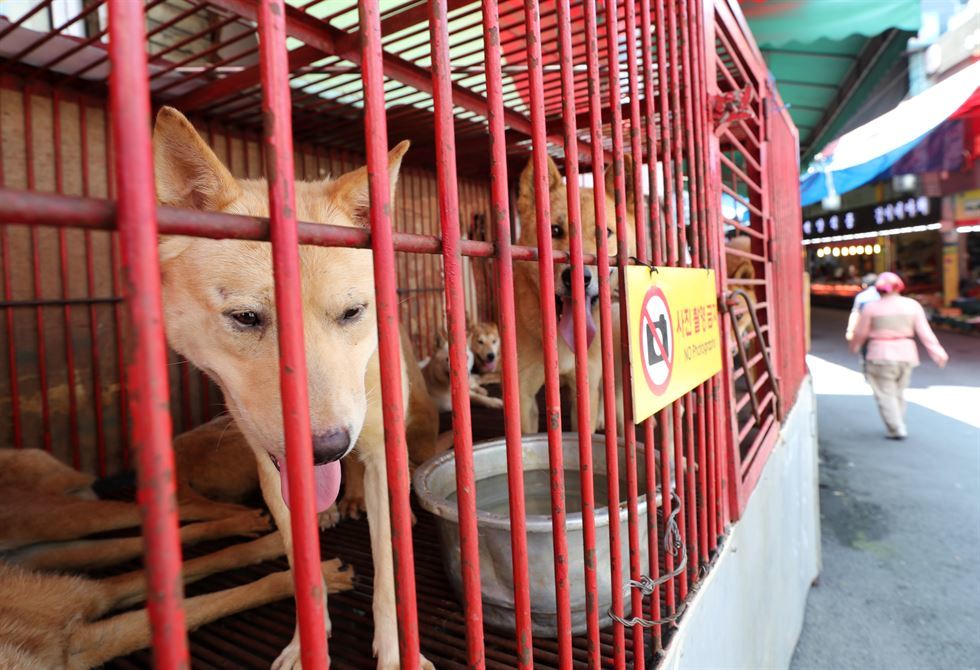 After years of criticism from animal rights groups, the largest dog meat market in Busan will close next month.

According to Busan Buk-gu Office, all 19 dog meat sellers at Gupo Livestock Market have agreed to shut down their businesses by July 11.

In return, the district office promised to give about 3.1 million won ($2,700) to each of them every month until December 2020 to help them make a new start.

After announcing its urban planning project to turn the market area into a park last October, district officials tried to persuade the sellers for months to open different types of businesses in other areas.

“We wholeheartedly welcome and support the district office’s effort to end the trade of dog meat in Korea,” four animal rights groups, including Korea Animal Rights Advocates, said in a joint statement.

“It is a big step forward, but Korea still has many such markets, including Chilseong Market in Daegu … We will continue to work with everyone to end the practice of eating dog meat.”

In addition; please check out the following:

14/6/19 is the 4th annual day of action against long distance live animal transport – and it is the biggest yet.

Last year, 2018; individuals and organisations from more than 30 countries staged over 100 actions against the trade in animal suffering.

In March 2019, the European Parliament voted for a ban on EU live exports to countries with lower welfare standards. So this June 14th you have the chance to help in keeping up the pressure to turn this breakthrough into legislation that could stop the suffering of millions of animals every year.

Visit the map at https://stoplivetransport.org/

to find an event near to you – and join likeminded people against this cruel trade.

Have a look at the following for details and photos of the 2018 actions: